How much plastic is in the Great Lakes? Tons and tons.

May 21, 2020
For years, scientists have been raising the alarm about the amount of plastics making their way into the Great Lakes. How much plastic is in there, though, has been difficult to pinpoint.

One Rochester Institute of Technology researcher who examined Lake Erie estimated in 2017 that the body of water was holding more than 4 metric tons of plastic — that’s roughly the weight of three and a half Honda Civics.

That may not seem like much in a lake so vast, but consider the lightweight nature of plastic and that wave action and ultraviolet rays have reduced most of the pieces in the water to tiny fragments, some of them microscopic, that can easily disperse over large areas.

Now consider that new research out of RIT contends the previous finding greatly underestimated the amount of plastic in Lake Erie and pegged the amount at closer to 381 metric tons — roughly the weight of 304 Honda Civics. 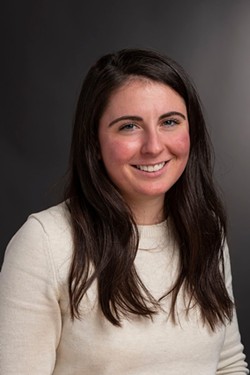 "I would hope personally that maybe someone would see these numbers and be shocked at the magnitude of them and maybe think twice before using a single-use plastic,” said Juliette Daily, a doctoral student in mathematical modeling whose research paper on the subject was recently published in the journal Marine Sciences Bulletin. “That's always my dream.”

Her research partner was Matthew Hoffman, an assistant professor in RIT’s School of Mathematical Sciences who did the 2017 Lake Erie analysis.

In both cases, researchers developed mathematical models that use differential equations to account for movement in the lake, such as currents and rising water. They used computers to crunch those equations and run simulations, which allowed them to develop the estimates and show how plastics circulate within the lakes.

But the new research relied on a far more sophisticated approach: a three-dimensional model that allowed researchers to show where plastic pollution is collecting in Lake Erie, including, for the first time, at the bottom of the lake. It also produced the first three-dimensional estimate of plastic mass in the lake.

“The sedimentation rate is especially striking when considering how long plastic has been entering the lake, and that the input rates are likely increasing,” Daily wrote in the paper.

Now, Daily and Hoffman are developing a model for Lake Ontario that they expect to launch this summer.

"Lake Ontario is interesting, it's deeper than Lake Erie so it might take a little bit longer for some of the stuff to hit the bottom compared to Lake Erie but I would expect that a lot of it's still going to find its way to the bottom,” said Hoffman, who in 2017 also estimated that 10,000 metric tons of plastics enter the Great Lakes each year. 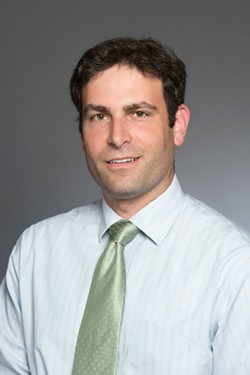 Daily and Hoffman walked through their Lake Erie calculations in their paper.

"Countries or states around the Great Lakes are producing all this plastic and we are pretty certain it has to be going into the water, but we're not really seeing it,” Daily said. “And so it kind of raises this question of where all the missing plastic is."

That question led to a lot of complex math and a more sophisticated model that took into account plastics in Lake Erie’s surface waters, as the previous model did, as well as plastics that would have sank to different levels of the lake, including the bottom. It takes into account the buoyancy and density of different types of plastic and the way water moves through the lake, as well as how those two factors work together to deposit plastic in sediment.

“That was kind of the focus of our work, to see if the sediment was a source for all of the missing plastic,” Daily said.

In the paper, Daily and Hoffman state that the model shows an estimated 171 metric tons of plastic are deposited along the bottom of Lake Erie over a half of year, though not distributed evenly.

For their analysis of Lake Ontario, the researchers hope to utilize a model of lake currents currently being built by the National Oceanic and Atmospheric Administration.

A team of researchers, led by Penn State University professor Sam Mason and including Hoffman and Daily, recently found that Lake Ontario has the highest surface concentration of plastics of any Great Lake. The team presented those findings in a Journal of Great Lakes Research article that was published in April.

Because Lake Ontario has a higher concentration of plastics than Lake Erie, Hoffman explained, there is potentially more plastic at the bottom of Ontario than Erie.

For Daily and Hoffman, their research is about more than just quantifying plastics in lakes or showing where it’s concentrated. They hope it can assist biological scientists who are trying to understand the effects of plastics on aquatic organisms by providing them with estimates of where plastics exposure may be greater.

“When you think about the mass in the sediment then it's just a different ecosystem that's impacted,” Hoffman said.