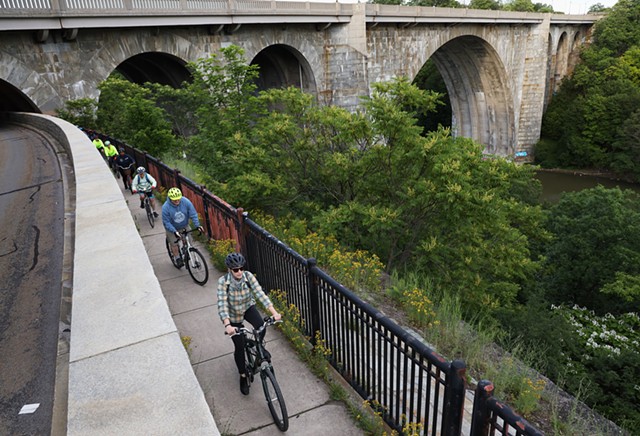 Brooke Fossey is used to helping people of all ages learn how to get around on their bikes. As the founder of Kidical Mass Pittsford, a group that grew into Flower City Family Cycling, she’s organized family-friendly rides to family-friendly destinations.

Fossey said her love of cycling grew from the sense of freedom she felt riding her bike as a child — a sense as powerful now as when she was 11.

“It’s like walking but faster,” Fossey said. “You get places quickly, you’re out in the world. I’m always waving to people and seeing people, people are shouting, ‘Hi.’ It’s just such a great feeling. I just love being on my bike.”

It is perhaps no surprise, then, that Fossey is an enthusiastic participant in Reconnect Rochester’s 20 Minutes by Bike campaign which encourages people to take short trips by bicycle. The transportation advocacy organization has developed a series of maps that show how far a typical person travelling at 10 mph could bike in 20 minutes.

The maps are a riff on the enduring adage that a person can drive anywhere in the Rochester area in 20 minutes. But they effectively show people how much ground they can cover pedaling at a relaxed pace, explained Jesse Peers, cycling coordinator for Reconnect Rochester.

“My hope is that it inspires people to give biking to a nearby destination a shot,” Peers said. “The reality in America is that 50 or 60 percent of our car trips are three or fewer miles, and you’re not saving any time by driving those shorter distances.”

So far, the organization has released maps for downtown Rochester, Irondequoit, and Pittsford. More are on the way, with Brighton, University of Rochester Medical Center and River Campus, and Rochester General Hospital on deck. Each map displays a geographic area in gray, with its road networks highlighted in green to show how far a typical bicyclist can get in 20 minutes.

Peers said he got the idea for the project from two other efforts: a similar map project for European capitals developed by the company Bike Citizens and a 2015 RTS bus frequency map developed by Reconnect Rochester founder Mike Governale.

The campaign is designed to appeal to casual bicyclists over hardcore enthusiasts, though the latter group may still find value in the visualizations.

THE RUBBER MEETS THE ROAD

The maps aren’t meant to serve as route guides, but rather to illustrate the possibilities of cycling as a form of transportation. To complete the picture, Reconnect tapped cyclists living in each mapped area to serve as a guide by sharing ride suggestions and offering tips for developing safe and comfortable routes.

Fossey introduced the Pittsford map, which is anchored at the village’s Four Corners, in a June post on Reconnect Rochester’s website.

“Seeing these maps of how far you can get in 20 minutes on a bike is really illuminating,” Fossey said. “Just looking at the Pittsford map I was surprised that you can get from the very center of the village at the Four Corners to East Rochester, to Pittsford Plaza, to a lot of the subdivisions that seem unattainable to bike there.”

In her post, Fossey explained how to get to some of the main destinations in Pittsford, such as the library, which has ample bike parking. Similarly, she explained how her husband uses a trail to avoid busy Monroe Avenue when he bikes to the Pittsford Wegmans; that many of the town’s cul de sacs are linked through trails and other connections, which in turn can be used to bike to or from the village; and how children in Pittsford bike to school. 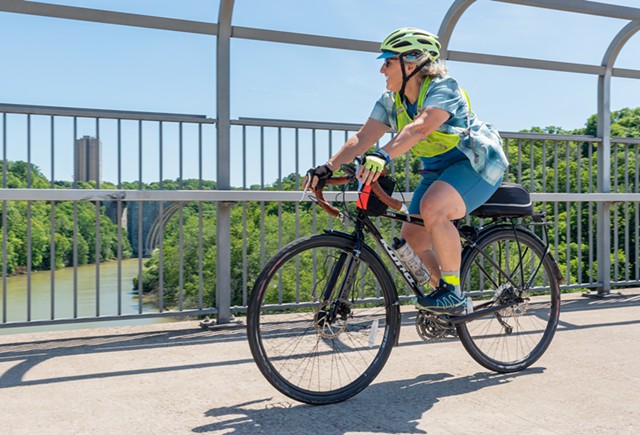 Pam Rogers of Irondequoit, who frequently plans and leads rides for the Rochester Bicycling Club, introduced her town’s map. She provided readers with suggestions on how to bike into the town using the Lake Ontario State Parkway trail, by bypassing a particularly hilly and busy section of Empire Boulevard, and by using a couple of pedestrian-cyclist bridges.

She also suggested restaurants, parks, and other bike destinations, and laid out a few suggested rides, including a 15-mile tour of the town. Rogers said she hopes the maps and posts get people thinking about hopping on their bikes to go to the store, to pick up prescriptions from the pharmacy, or even to go out for a beer.

“I don’t have to drive, I can ride my bike to places,” Rogers said. “It’s viable transportation. It doesn’t take long to get where I’m going.” 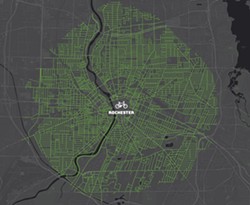 In his post on downtown Rochester, Peers used Parcel 5 as an anchor point and illustrated that roughly any part of the city is “20ish minutes” from downtown. He also wrote about how he and his family have found that they don’t need to bike on the city’s major streets, which are often busy and can be intimidating to some cyclists, to get to their destinations. They often make use of quieter residential streets.

“We know some people will only bicycle on less stressful streets, and that’s totally fine,” Peers said.

FITTING IN TO THE BIG PICTURE

The city of Rochester has been developing a network of bike boulevards, which are essentially routes down residential streets that parallel major, high-traffic corridors. The residential streets that make up the boulevards are outfitted with traffic calming measures, such as on-street parking, curb bump-outs, and strategically deployed speed humps, as well as marked bike lanes or shared-use lane markings, commonly called “sharrows.”

The city began a major project this spring that will add 20 miles of bicycle boulevards to the city by the end of the year. It’s also building or improving several trails and trail connections through the ROC the Riverway project and adding new bike lanes that are separated or buffered from motor vehicle traffic.

“There’s a lot of people who aren’t as comfortable on a bike, they don’t ride all the time,” said Erik Frisch, manager of special projects for the city of Rochester. “And so for their comfort level, no matter what we deliver on arterial streets, sometimes, it’s not going to be great for them. And so providing alternatives, whether it’s the trails or the bike boulevards, is important to getting more people out.”

The timing of Reconnect Rochester’s map campaign puts the organization in a good position to champion the bike boulevards. On June 16, Reconnect’s cycling advocates began leading a series of rides for the city’s Department of Recreation and Human Services. Peers said ride leaders are using the opportunity to familiarize participants with the bicycle boulevards.

The map campaign dovetails with the launch of the HOPR bike and e-scooter sharing service in the city and the company’s coming launch of bike sharing in Brighton, Brockport, Irondequoit, Pittsford, and Fairport-Perinton.

Reconnect’s effort also overlaps with some suburban communities’ efforts to become more bike friendly. For example, the town and village of Pittsford recently finalized their joint active transportation plan, which recommends restriping and widening shoulders on some streets in the town and village; adding bike lanes, shared-use lane markings, and bike parking; lowering the village speed limit to 25 mph, and building sidewalks or multi-use trails along some high-volume streets, including Monroe Avenue and Fairport Road.

But Fossey also wrote that the map can be misleading because so many larger streets, with speed limits of 40 mph — and cars going much faster than that — pass through Pittsford, and that many people may feel unsafe biking on them.

“Even though we have some amazing connections, we still have some work to do to make these main roads safe for people to ride on, and so that people feel safe coming out on them,” Fossey said.

Irondequoit developed its active transportation plan in 2017, becoming one of the first suburban communities in Monroe County to do so. Some of the recommendations have been carried out, such as restriping and “right-sizing” roads, according to Kerry Ivers, the town’s planning and zoning administrator. For example, St. Paul Boulevard was narrowed from four travel lanes to two with a center turn lane, a reconfiguration that allowed for wider shoulders. 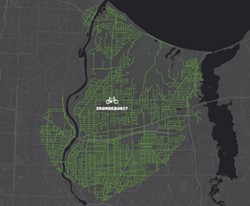 Municipal planners and cycling advocates argue that these types of improvements are critical because they help riders of all skill levels feel comfortable on their bikes. But Rogers also noted that broadly encouraging biking could erode the stubborn image that cycling is more sport than transport while advancing the idea that bikes are a great way to get around, and that they can be a form of relaxed recreation.

“I always like to say it’s just not for men in Lycra anymore,” Rogers said. “It’s just a really nice way to get out and enjoy the outdoors.”