How a right-wing troll turned my tweet into fake news 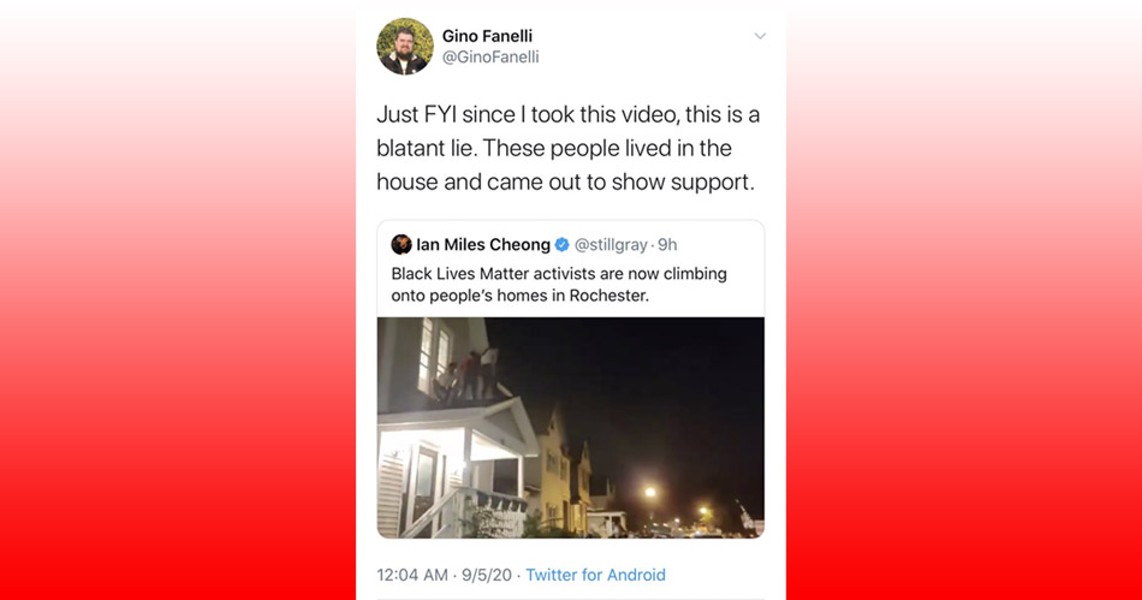 The night the alt-right co-opted my tweet and I went viral, I had arrived home doused in PepperBall residue and was physically and emotionally exhausted from covering another mass demonstration downtown.

By then, the third of what would become nightly protests in response to the news of the death of Daniel Prude, the national media had parachuted in and turned its cameras on Rochester.

All I wanted was to plop down on the couch and binge on “Futurama” over a leftover cheeseburger. But before I could put up my feet, my phone buzzed with breaking news that was quickly circulating: protesters were overrunning people’s homes, scaling walls and rooftops like a swarm of locusts devouring everything in its path.

“Black Lives Matter activists are now climbing onto people’s homes in Rochester,” read a tweet with a five-second video showing throngs of protesters marching the streets and three people standing on the roof of a portico of a house.

there is no one more consistently wrong on this website than Ian Miles Cheong pic.twitter.com/a7tto8JVpb


The news was alarming, not because protesters were invading homes — they weren’t. It was alarming because the video in the tweet was mine and had been hijacked by an influential right-wing troll with a quarter of a million followers.

His name was Ian Miles Cheong, a resident of Malaysia who has amassed his social media following by playing a neo-conservative American provocateur.


A month earlier, he provoked an entire day of outrage from American right-wing news outlets, Republican officials, and conservative pundits when he retweeted a video by Ruptly, the video news arm of the Kremlin-financed RT News, with the comment that activists in Portland were preparing to burn Bibles.

“Left-wing activists bring a stack of Bibles to burn in front of the federal courthouse in Portland,” he wrote, wildly exaggerating what the Ruptly video showed, which was that a few protesters among many thousands appeared to have burned a single Bible, and possibly a second, as kindling to start a larger fire. The Bible burning was not a focus of the demonstration.

It wasn’t long before the likes of Donald Trump Jr. and Sen. Ted Cruz, the Republican from Texas, had retweeted Cheong with their own comments tailored to a base that long ago bought into the narrative that liberals sow godless disorder. The president’s son tweeted that Antifa had moved to the “book burning phase.” Cruz wrote, “This is who they are.”

For such an audience, and the media outlets that serve them, the story that Black Lives Matter protesters in Rochester were infesting people’s homes like parasites was too good to check out. Besides, there was video to prove it, right?

I had shot the footage a few hours earlier while trailing the demonstration march along Tracy Street. The video indeed showed three people standing on the portico roof of a house.

What the video didn’t show, however, was what I and countless others had witnessed before I trained my camera on the house and hit record, which was that the people on the portico had emerged from the house, climbing out of a second-story window to watch the action on their street. They were either residents of the house or somehow acquainted with the residents.

Marchers could be heard and seen beckoning them, shouting to them, “Come on! Come on!” and waving them down.

I was live-tweeting the event, and the video was one of several short clips I posted to Twitter that evening without a caption. Although anyone could have copied and repurposed the video, posting it without comment left it more vulnerable to interpretation.

By the time I learned that Cheong had stolen my video and attached his own warped narrative to it, right wing spin sites like Gateway Pundit had already latched onto Cheong’s lie and published a story that included my video.

“The mob in Rochester tonight stormed restaurants, broke glass, flipped restaurant tables and screamed at frightened diners,” the site reported. “And later the BLM rioters started climbing on people’s homes! Coming soon to a neighborhood near you!”

Lesser known sites also shamelessly glommed on, twisting a mundane nugget of video footage into a completely phony tale and spoon-feeding it to an audience seemingly eager to lap it up.

The term “fake news” has been obfuscated over the past five years, but the process of creating it is straightforward and unsophisticated. All it takes is an absence of scruples and a willingness to beg, borrow, and steal without caring a fig for the facts.

Unsure of how to stop the conveyor belt of lies switched on by Cheong, I did what real journalists seek to do: set the record straight. I retweeted Cheong with a comment that read, “Just FYI since I took this video, this is a blatant lie. These people lived in the house and came out to show support.”

With the alt-right media machine in full force, I expected my tweet to fall on deaf ears.

But within a matter of minutes, my Twitter feed blew up. The modest engagement that was typical of a reporter in a mid-sized city was replaced with thousands upon thousands of notifications. People heard my message. At last count, the tweet was retweeted nearly 30,000 times and had more than 111,000 likes.

Just FYI since I took this video, this is a blatant lie. These people lived in the house and came out to show support. https://t.co/U33IJz1jzl


Best of all, Cheong heard it, too.

The next day, he deleted his lie and even, sort of, acknowledged his wrongdoing in a backhanded way. He retweeted a video of protesters in Rochester trashing a restaurant with the comment, “There were some people standing on a roof in Rochester, whom I called ‘rioters.’ They were residents. Apparently that’s me posting disinformation about a ‘peaceful protest.’ The same ‘peaceful protest’ where this happened, that no one wants to talk about.”

There were some people standing on a roof in Rochester, whom I called "rioters." They were residents. Apparently that's me posting disinformation about a "peaceful protest."

The same "peaceful protest" where this happened, that no one wants to talk about. pic.twitter.com/uBDVvV5pL7

To set the record straight again, there was nothing “apparent” about Cheong spreading disinformation. He did it.

Hundreds of people replied to my tweet, many of them thanking me for adding some badly-needed context and taking a jab at the alt-right.

Other responses, though, were violent, abusive, racist, and downright scary.

The most disheartening were those written by people who recognized they had been fed a lie, but found it empowering. Some claimed the lie was acceptable because the idea that protesters would scale homes was not that far-fetched and would eventually come to pass.


Some dismissed the lie because other videos showed protesters disrupting diners by throwing chairs, breaking glassware, and turning over tables at Swan Dive and Ox and Stone.

But again, here context is needed. Cheong claimed “no one wants to talk about” the episodes at the restaurants. He’s wrong. I’ll talk about them.

Exponentially more protesters attempted to stop the vandalism than were taking part in it. Property damage was minimal. The restaurants subsequently issued statements saying so and offering their support for the Black Lives Matter movement.

I know because I was on the ground that night covering the protests, unlike Cheong who was tweeting about them from the other side of the planet.

The sad reality is that some people will buy into a story without regard for honesty or facts or the source. They want their beliefs affirmed and they’re prepared to devour any content that confirms their biases.

I filed a copyright claim with Twitter against Cheong, but heard nothing back. I also tagged Twitter Support several times demanding some sort of accountability. Those pleas, too, were met with silence.

I reached out to Cheong himself, contacting him through Twitter. Where else? I wanted to know what drove him to manufacture fake news. He never responded, and subsequently blocked me from sending him messages.

About a week later, protest organizer Adrian Elim, speaking to demonstrators at Martin Luther King Jr. Park complained about media weaving false narratives and issued what sounded an awful lot like a threat.

“We know that camera equipment you have is expensive and fragile,” they said, “and that’s all I’m going to say.”

They didn’t specify what media, but I had an idea. I only hoped they could tell the difference between the good guys and the bad.