Sure, there are plenty of sweet shows happening all over Rochester, from Anthology and Abilene to The Montage Music Hall and Skylark. But those are just the venues with well-known address listings. What about the countless word-of-mouth concerts happening in under-the-radar spaces all over the city? The "house show" scene in Rochester is vibrant and varied. Far from exhaustive, this is the story behind five underground, DIY concert venues and organizers in Rochester, and the community that keeps them alive.

Perhaps most important, the concerts at Vineyard Community Space are always all-ages, offering an alcohol-free environment and access to live music for teenagers who can't get into shows at traditional clubs due to age restrictions. With 49 different concerts staged at the Vineyard in 2016 alone, the music is plentiful.

Long-time Rochester concert organizer and arguably the most recognizable face in the local music scene, Tim Avery also hosts shows at the Vineyard, in addition to promoting regular ticketed shows at the Bug Jar on Monroe Avenue. Additionally, he presents concerts at another church – South Wedge Mission on Caroline Street — where indie and folk artists perform as part of the donation-based "Live at Mission Hall" series. 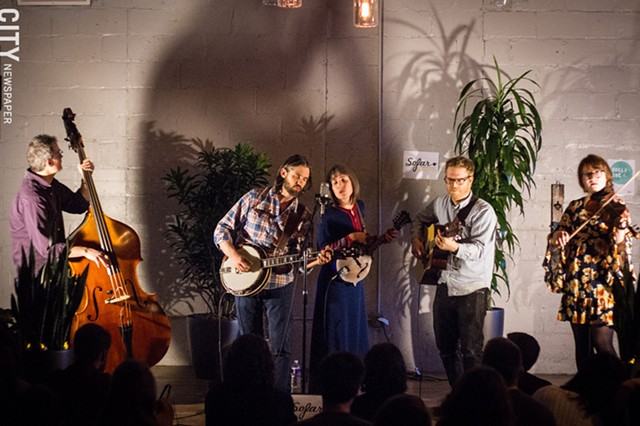 Avery sees an emerging trend in the Rochester house-show scene. "I think what happened was, we all got smart, and a lot of the spaces became attached to businesses or churches," Avery says. "And they have certain protections under the law that just a houseful of rowdy kids does not have."

The potential synergy between a DIY concert series and local businesses is not lost on Nick Moore of the indie folk band MD Woods. The local musician happened upon the unassuming Small World Books on North Street back in 2014. Soon enough, owner Rocco Pellegrino had hired him to work in the shop, and Moore started to conceive of a way to bring in more business and engage the arts community at the bookstore – combining live music, the store's eclectic selection of books and art, and Pellegrino's knack for cooking.

"I knew we wanted to develop a safe space where people felt free to express themselves and learn and grow together," Moore says. "I'd just finished developing an after-school art and music program in which I had watched and helped facilitate a community of youth coming together and transforming a space through the arts. Collaboration had the power to bring life into a space. We could do it again. I thought what better space to create in than a bookstore."

Moore's Small World shows bear an implicit focus on inclusivity and a receptiveness to different kinds of music and other means of artistic expression. Events frequently meld music, poetry, and visual elements into a cohesive evening that always features beloved local acts, but often showcases touring artists. In recent months, Katie Preston of the indie rock band Pleistocene has come on board to book and host shows.

Another business that has embraced the possibilities of live concert events in its space is Wicked Squid Studios in downtown Rochester. A fully equipped recording studio and music production facility, the Squid is also a budding venue, with bands performing right in the tracking room. Like Moore, Wicked Squid's owner and chief engineer Josh Pettinger sees engagement as the primary motivation.

"It's a good way to kind of interface with the community directly, and that, for any business, is huge," Pettinger says. "We've pulled in clients that have legitimately helped to keep our doors open through these shows." 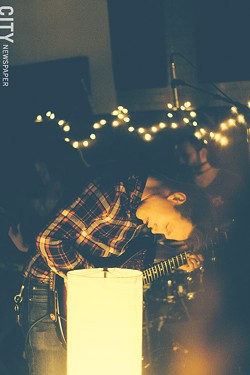 Pettinger also identifies Sofar Sounds Rochester as an important community player tapping into the public demand for exclusivity. Intrigued by the Sofar live music series that were taking place in other cities, Kelsey Delmotte endeavored to start a Rochester chapter in 2015. By November of that year, the inaugural show – featuring Jackson Cavalier, Mike Brown, and Overhand Sam Snyder – took place at the Rochester Brainery's original Village Gate location. Still going strong, what sets the monthly concerts apart is the element of mystery. When people sign up to attend a show and buy tickets, they have no idea what artists will be performing or even where the concert will be held. The address is sent to attendees a few days prior to each show.

Concerts feature predominantly local artists, and past venues have ranged from art galleries like The Yards and Makers Gallery and Studio to business offices like the 21st floor digs of Cloudsmartz, high atop the First Federal Plaza on East Main Street, to outdoors at the Public Market. The Market concert was made possible by an assist from the Wicked Squid crew, who brought their mobile unit to improve the sound.

Singer-songwriter Seth Faergolzia of the freak folk bands Multibird and 23 Psaegz has been a fixture of the Rochester scene and local DIY culture since he moved into a house with the band Meddlesome Meddlesome Meddlesome Bells, who were already hosting shows there. When the group moved to Philadelphia, Faergolzia took over curation of regular shows at what became known as Meddlesome Lab.

Though the eccentric musician has since moved out of the house, he and his partner Laura Lee Jones still run the space. "I was definitely more into bringing the weird, acoustic stuff in," Faergolzia says. "What I wanted to do was have a place where someone could tour, get a little bit of money for their very first time playing in the city." The operating principle is that the local bands on the bill will bring their friends, and the touring act receives all the money from any donations collected that night.

Potluck dinners are often a big part of shows at Meddlesome. "It's definitely community-building," Faergolzia says. "I think when people dine together, they bond more deeply." The vibe at Meddlesome skews artsy, and the environment is usually one of attentiveness. "Our space is more of a listening room, as opposed to a 'rock-out-and-party' sort of space," Faergolzia adds.

It is precisely Meddlesome's availability to touring bands that is so crucial. Artists who may not be readily booked by the nearby Bug Jar or Flour City Station because they don't have a proven following in the city are welcomed there. Personally, I might never have heard the psychedelic dream folk of the Brooklyn-based band Cookie Tongue, the Gothic, avant-garde drone rock of the Italian duo Father Murphy, or NPR darlings Bellows (before they broke out), had it not been for Meddlesome Lab.

Faergolzia has even drawn inspiration in his own songwriting from hosting these shows, having written "House Show," a jaunty sing-along that encapsulates the ethos of DIY concerts:

"There isn't a cover, and the people are loving / They all put a few bucks into the hat and that is that / The touring band gets a hand to the next show / And everyone walks home with a warm, warm glow."