5. Learn the differences between frozen desserts

Winters in Rochester may leave us shivering (especially this year), but when summers roll around, it really is beautiful here. And the warmer temps may just put you in the mood to cool off again with a frozen treat. Even though there may be similarities, not all frozen treats that come in a dish or a cone are created equal.

From the frozen yogurt trend to classic frozen custard and good ole ice cream, here's a guide to everything you need to know to lick up the competition when it comes to ice-cold desserts.

There's nothing like the thrill of chasing a rogue drip down the side of a cone with your tongue, or guzzling down the sweet, melted remains pooled at the bottom of your dish. It's what summer's all about. And for ice cream purists, it's that dance that makes the original frozen treat the cream of the crop. The origins of the dessert, which is made primarily of milk, or cream, and sugar, go back to the Persian Empire (we're talking 400 B.C.). The mixture is stirred slowly while cooling, to incorporate air and prevent large ice crystals from forming, giving ice cream a smoothly textured, semi-solid scoopable treat. It's best served at 23 degrees. Before modern refrigeration, ice cream was a luxury only the richest among us could afford. Now, we all scream for it.

It's impossible to highlight every ice cream shop in the greater Rochester area (there are dozens), but here are a few standouts. Don't hesitate to strike out on your own and find your favorite.

Bruster's (locations in Henrietta and Webster, Brustersicecream.com) has perhaps the widest variety with more than 140 flavors, 30 of which are made fresh daily — from classics like cookie dough and mint chocolate chip, to coffee cake streusel ice cream (it'll change the way you look at breakfast forever).

If the weather is nice enough for a bit of a drive, consider cruising down to Shark's in Bloomfield (50 State Routes 5 & 20, Sharksicecream.com). Shark's has all the classic flavors (its butter pecan is the perfect combination of salty and sweet), and they're homemade on site. Throw in nearly a dozen flavors of soft serve (ice cream's slightly airier cousin), and it's a great getaway to satisfy your sweet tooth. 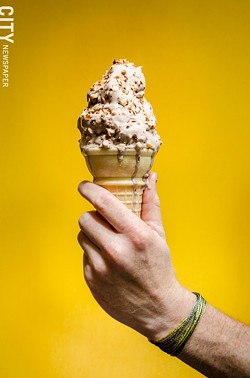 Growing up in Rochester, many babies first words may have been "frozen custard." We can blame Abbott's for that. Invented in Coney Island, N.Y., in the early 1900's, this creamy concoction gets its signature texture because it's made with egg yolks in addition to cream, sugar, and flavoring. The goal was to keep the frozen custard colder longer, so the forefathers of frozen custard, Archie and Elton Kohr, could sell more of the sweet snack. It can be served at temperatures anywhere between 10 and 18 degrees, and by FDA standards, must contain at least 10 percent milkfat and 1.4 percent egg yolk solids to be considered frozen yogurt. The mixture is pushed through a frozen tube, and scraped into containers by blades, minimizing the amount of air in the custard and ensuring that the ice crystals that form are very small. That means frozen custard has a smoother texture and different mouth feel than other frozen treats.

You can't mention frozen custard in this town without mentioning Abbott's. After settling in Rochester with his secret recipe in 1926, Arthur Abbott built an empire that now includes more than 40 locations nationwide, including 28 here in the Rochester area (Abbottscustard.com).

Dipper Dan's (136 W. Main Street in Honeoye Falls, 624-5570) has been a staple in Honeoye Falls for more than 20 years. Open seasonally from April to October, the shop offers more than 40 flavors, including Byrne Dairy frozen custard and frozen yogurts.

Frozen yogurt (or fro-yo to you hipsters) has cropped up as the latest dessert trend over the last couple years. It seems like frozen yogurt shops have followed in the footsteps of Starbucks — with a new one cropping up on every corner seemingly every week. Frozen' yogurt's popularity may be partially due to the fact that it's lower in fat than ice cream and frozen yogurt. Frozen yogurt — which unlike ice cream and frozen custard, is not regulated by the FDA — is usually made of milk solids, milk fat, some kind of sweetener, and a live yogurt culture. After combining the ingredients, frozen yogurt is cooled to 21 to 28 degrees as air is added, preventing large crystals from forming, giving it a smooth, airier texture.

Another appeal of frozen yogurt shops: customization. Most operations feature long rows of soft-serve-style machines with dozens of flavors. Customers can pile on toppings galore into their massive bowls before weighing their treat and cashing out.

Perhaps in an attempt to capitalize on the soon-to-be Collegetown crowd, Yotality opened a fourth location in Brighton (1380 Mt. Hope Avenue). The owners, who also run shops in Pittsford, Victor, and the Buffalo area (see Yotality.com for addresses & hours), focus on fruitier flavors and the health benefits of frozen yogurt, even going as far as including half a dozen kinds of fresh fruit as toppings.

Yolickity (four locations: Webster, Greece, Henrietta, and Brighton, Yolickity.com), is one of the larger shops in town, boasting more than 40 regular flavors from dreamy dark chocolate and Tahitian vanilla to Greek honey vanilla, s'mores, and butter toffee popcorn. Some of its flavors are sugar-free, fat-free, and gluten-free, so everyone can enjoy the tasty new treat of summer.