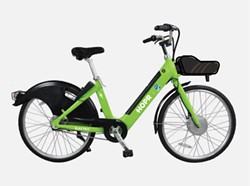 The city of Rochester is set to bring in Miami-based HOPR to fill the bike-share void created when Zagster pulled its Pace system out of Rochester this past spring.

This month, the Rochester City Council will vote on a new agreement HOPR that would give the company exclusive control of a “shared mobility system” in city-owned public rights of way. The three-year agreement will provide Rochesterians with access to bikes, e-scooters, and e-bikes from stations set up around the city. Users will have several options to pay, from hourly rentals to annual subscriptions.

As CITY reported in June, the Regional Transit Service tapped HOPR to establish bike share systems in Rochester’s suburbs. Brighton, Brockport, Sweden, Fairport, Irondequoit, Greece, and the town and village of Pittsford were all marked as potential locations.

HOPR, started as CycleHop in 2011, will serve as a replacement for Zagster. Zagster, later rebranded as Pace, launched in July 2017. In March, the company abruptly pulled bikeshares out of all midsize cities due to the pandemic. Zagster is now defunct and in liquidation.

Despite the collapse of Zagster as a company, the program was largely successful in Rochester. The city reported that over 100,000 rides were taken on Zagster bikes between July 2017 and October 2019.

The agreement with HOPR is set to go to vote at the August 18 City Council meeting. If passed, the program could launch as early as September.