Hollywood’s trying to wink at us 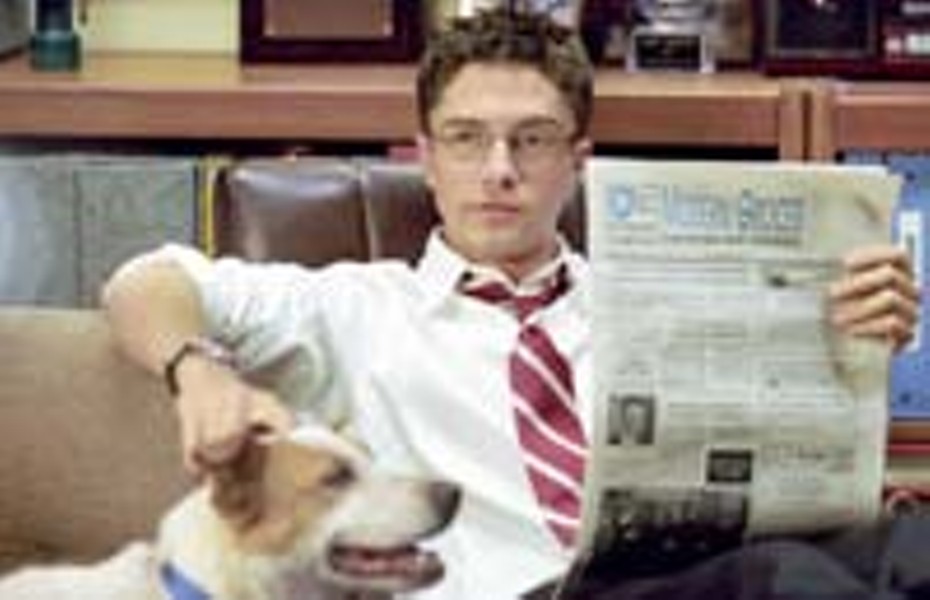 I have two smiles. One comes from seeing a good movie. The other comes from seeing a funny movie. Neither smiles made a special guest appearance during my screening of Win a Date with Tad Hamilton! This is a picture we're supposed to swallow as satire; the filmmakers think this two-bit, hare-brained, fleabag of an idea will elevate their movie above the junk they're spoofing. Like Gigli would suddenly become entertaining if J.Lo and Ben interrupted their powerhouse acting performances for two seconds, looked at the camera and winked at the saps in the audience.

Win is Hollywood Script #8, which, as I'm sure you all know, is the story of a girl relentlessly pursuing romance with a guy who is way out of her league, only to have a sudden, last-reel epiphany that the real man of her dreams is the shy boy she's been best friends with her entire life.

The situation is barely tolerated by Pete (Topher Grace), who is both the girls' best friend and their boss down at the Piggly Wiggly. He's had a crush on Rosalee his entire life and is on the verge of working up the nerve to possibly think about letting her know how he feels. Before he's able to sputter out the embarrassing words, Rosalee wins a contest that whisks her to Los Angeles for a dinner date with Tad, whose people (played by Nathan Lane and Sean Hayes) have concocted said contest in a last-ditch effort to soften the actor's James Dean-ish reputation for fast cars and fast women.

Things really get gummed up for Pete when Tad decides to pursue a relationship with Rosalee after the date. Are his feelings genuine, or is he just using her to reshape his image? Hope you're not the type who likes answers to questions, because you won't be getting one here, as Win hurtles toward its inevitable conclusion (the same exact one it mocks in its opening scene, by the way).

Director Robert Luketic (Legally Blonde) and television sitcom writer Victor Levin shallowly play up the differences between big city and hayseed town living. (Oh my god! You mean people in Los Angeles are different than people from Cowlick, West Virginia? Stop the presses!) They seem way more interested in making things look all pink and sun-kissed than even remotely substantial. Win is cinematic cotton candy that repeats on you before you're finished choking it down.

The only redeeming factor is Grace, who seems destined for much bigger and better things. Duhamel comes off as a lightweight version of Nate Fisher --- merely teeth and pectoral muscles attached to a cell phone and convertible. Bosworth shows us how important the casting of Reese Witherspoon was to Blonde. Without Reese, that film may have been as bad as Win.

January ends in style and controversy at the Dryden Theatre with the local premiere of the French-financed 11'9"01 (Saturday, January 31). It's a collection of shorts, each running 11 minutes, nine seconds, and one frame. Eleven of the world's finest filmmakers participated, including Amos Gitaï, Shohei Imamura, Sean Penn, and Mira Nair.

Some folks think a few of the shorts express very un-American sentiments, but that isn't the case at all. Most of the films compared the 9/11 attacks to lesser-publicized events with higher body counts that happened elsewhere in the world, like Ken Loach's look at the September 11 (1973) US-backed coup of Peru's government, and Danis Tanovic's reminder of another painful 11th --- the massacre at Srebrnica in July 1995.

One short is even a comedy: Idrissa Ouedraogo's funny story about a group of kids who think they've found Osama bin Laden and dream up ways to spend the $25 million reward. But the most devastating piece came courtesy of 21 Grams director Alejandro González Iñárritu. He used a black screen, Arab chanting, television sound bites, and split-second flashes of doomed WTC jumpers to send chills down even the most jaded of spines.