In her first speech before the state’s business leaders, New York Gov. Kathy Hochul said Friday that she will focus on economic development and helping workers get better access to child care as the economy struggles to regain pre-pandemic levels.

Hochul, speaking at the annual meeting of the state’s Business Council on Lake George, said she will intensify efforts to empower the Regional Economic Development Councils, begun by her predecessor, former Gov. Andrew Cuomo, who resigned in August over a sexual harassment scandal.

But she told the business leaders that she’s open to altering the program.

“I don’t feel constrained that that’s the model we have to stay with,” Hochul said. “I don’t want to dictate from Albany.”

Later, speaking to reporters, the governor said she wanted to intensify the focus on reviving downtown areas in struggling cities.

Hochul touched on her plans to increase the amount of a planned 2022 environmental bond act to $4 billion, saying fighting climate change benefits businesses. And she vowed to use part of a projected state budget surplus to provide more funding for child care, so that more women can reenter the workforce as the pandemic wanes. But she assured them that she does not plan to go on a “wild spending spree." 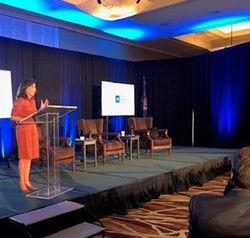 Former state Attorney General Dennis Vacco, who is now a private attorney in Buffalo, has filed a lawsuit on behalf of 10 security officers at state-run hospitals who say the mandate goes against their constitutional rights. Vacco, who was also at the gathering, said his clients want the option of regular testing instead. He said that alternative is available to the state’s teachers.

“In this instance, the health care workers are being treated in a disparate fashion,” Vacco said. “Because their choice is vaccination or termination.”

Hochul said she will be announcing more steps before the end of the day on Monday to help ease any mandate-related staffing shortages at hospitals, nursing homes and other health care facilities.

“We are very aggressively putting together a compressive strategy to address this,” said Hochul, who added she’s in close touch with health care facilities and has promised them that she will not “leave them hanging."

In New York state, 84% of health care workers have received a vaccine.