September 27, 2021
New York Gov. Kathy Hochul said she’ll sign an emergency order to call in the National Guard and import health care workers from other states and countries. This is all to ease anticipated staffing shortages at hospitals and nursing homes due to a midnight COVID-19 vaccination deadline.

In New York, 84 percent of health care workers are vaccinated for COVID-19. If the remaining 16 percent don’t comply with the mandate by midnight, existing staffing shortages are expected to get worse. 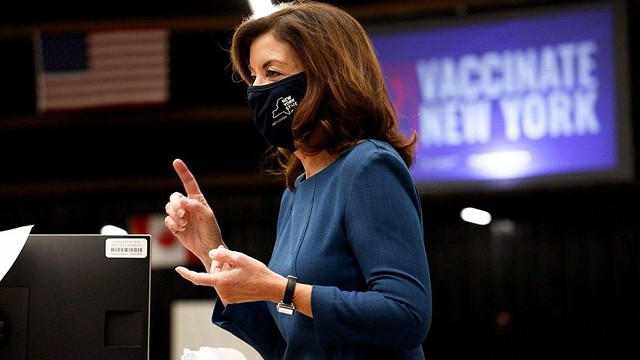 “I will be signing an executive order to give me the emergency powers necessary to address these shortages where they occur,” Hochul said during an appearance in the Bronx Monday.

The order will waive some existing regulations and allow licensed health care professionals in other states and countries, as well as retired workers and recent graduates, to practice in New York. Visa requests will be expedited to help foreign workers arrive in New York more quickly.

The governor said she will also deploy medical professionals in the National Guard to help out and her staff will be working with health care faculties around the state to determine where the greatest shortages are anticipated.

Hochul issued a last minute plea to unvaccinated workers, saying the crisis is completely avoidable. She said those who are refusing to be immunized are putting additional burdens on their vaccinated colleagues.

“Please do the right thing,” Hochul said. “Your employers are anxious to just give you the jab in the arm, and say ‘You’re part of the family, we need your help, continue on.’”

Under the governor’s plan, unvaccinated workers who are terminated from their jobs will not be eligible for unemployment insurance benefits.

The mandate faces legal challenges. A provision that would not allow unvaccinated workers to claim a religious exemption is on hold pending a court hearing. That means workers who can document that their religion prevents them from getting a vaccine will be allowed to do so for the time being.

Also, the vaccine mandate for 5,600 employees of the state’s court system is on hold because their union, the Civil Service Employees Association, has claimed in court that the requirement is subject to collective bargaining. A hearing will be held Oct. 1.

Several security guards at state-run hospitals are claiming in court that the mandate violates their constitutional rights. Former State Attorney General Dennis Vacco, now in private practice, said his clients want the option of regular testing instead. He said that alternative is available to the state’s teachers if they don’t want to get vaccinated.

“In this instance the health care workers are being treated in a disparate fashion,” Vacco said. “Because their choice is vaccination or termination.”

The vaccine requirement for health care workers is not the only state-issued mandate enacted by Hochul. Home health care workers, employees of hospice and everyone who works at an adult-care facility must be vaccinated by October 7 or they too will lose their jobs.