Hochul says budget plan spends more, but will not cause NY to go into debt 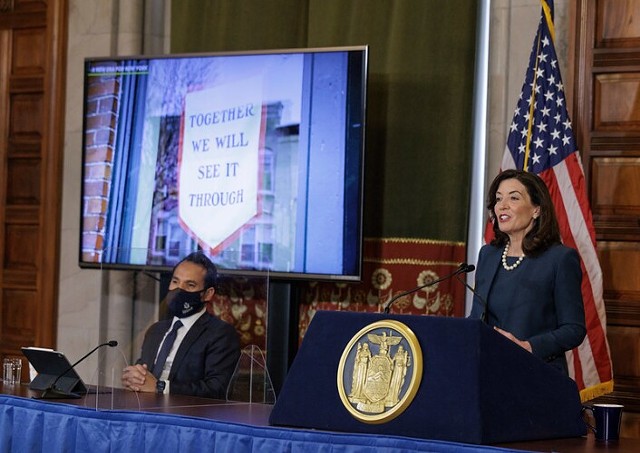 It includes $10 billion for health care over the next several years, more money for schools and child care, as well as infrastructure projects and a larger environmental bond act proposal.

Hochul said she’s able to propose the ambitious spending programs because the state is awash in cash due to better than anticipated tax receipts, a “thriving” stock market that is heavily taxed by New York, and a historic influx of federal aid.

“This is a once-in-a-generation opportunity to make thoughtful, purpose-driven investments in our state and in our people that will pay dividends for decades,” Hochul said.

Hochul wants to spend an additional $10 billion over the next five years on health care, with a goal of increasing the health care workforce by 20 percent, and helping to supplement salaries.

She would like to raise school aid by more than 5 percent, with a record $2.1 billion increase to a total of $31.2 billion. Her budget for the first time fully complies with a court order that said New York needs to spend billions more dollars on its poorest schools in order to provide an equitable education.

The governor increased her initial plan, announced in the State of the State on Jan. 5, to help families pay for child care, from 100,000 households to 400,000.

Hochul is also taking advantage of generous federal subsidies to spend $32.8 billion on infrastructure projects, ranging from big renovations of airports and train stations to smaller — but aggravating — road problems.


“I’ve also declared war on potholes,” said Hochul, adding that her goal is to spend $1 billion to go from potholes to “not-holes."

The governor’s plan would cut taxes, including $2.2 billion in property tax relief, accelerate a planned middle-class tax cut, and provide $250 million to small businesses hard hit by the COVID-19 pandemic.

She does not propose any new tax or fee increases, but the budget does rely on more revenue from the gaming industry.

Her plan calls for speeding up the timetable by one year to accept applications for three new gambling casinos, potentially opening up the lucrative market for gaming halls in the New York City region.

Budget director Robert Mujica said the newly authorized mobile sports betting pulled in $150 million in over 650,000 new subscribers in its first weekend alone, and he projects $357 million in revenues from it during the new fiscal year.

“We expect our revenues will meet our targets,” said Mujica. “If not exceed them.”

Mujica, who said half of the revenues collected from mobile sports betting go to education aid, said the state is now “number one in the nation” in volume of sports bets placed.

Hochul promised to be prudent with all of the spending she’s proposed. She said there are no built-in recurring programs that can’t be financed in future years. And she said she’d like to put more money into the state’s rainy day reserve fund, to total 15 percent of the state’s budget by 2025.

“For the first time ever, with smart planning, New York will have no out year gaps,” Hochul said. “All these commitments are either one-time expenditures or are supported by the expectation of a reasonable growth in revenue as projected by our division of budget.”

Patrick Orecki, with the watchdog group Citizens Budget Commission, said while a 15-percent reserve fund is better than New York’s historically low rate of 5 percent, the state should be putting even more aside. He said New York’s finances are heavily dependent on taxes imposed on the stock market and on high-income earners, which are both less predictable sources of revenue.

“A good national benchmark is 17 percent of operations,” Orecki said. “Given New York’s tax structure, we think revenues are typically more volatile, and therefore the state should be saving more than 17 percent.”

Hochul is upping the amount of money in an environmental bond act that would go before voters in November from $3 billion to $4 billion, and she would like to extend the state’s Tuition Assistance Program to part-time college students and to inmates in state prisons.

Hochul also added some items that are not related to state spending. It’s a practice often employed by governors because, under New York’s laws, they have more power in spending plan negotiations to successfully win agreement on legislation than during the regular legislative session.

Hochul included a proposal to revamp the state’s troubled Joint Commission on Public Ethics, or JCOPE. It would be replaced by a rotating panel of five commissioners nominated by 15 leading law school deans. She also included a proposal for a constitutional amendment to limit statewide office holders to two four-year terms, as well as bills to lower the voter registration deadline to 10 days before Election Day and to locate polling places on college campuses.

One item that’s not in the state budget: funding for new stadium for Hochul’s beloved Buffalo Bills football team. Mujica said that’s because the talks are still in progress.