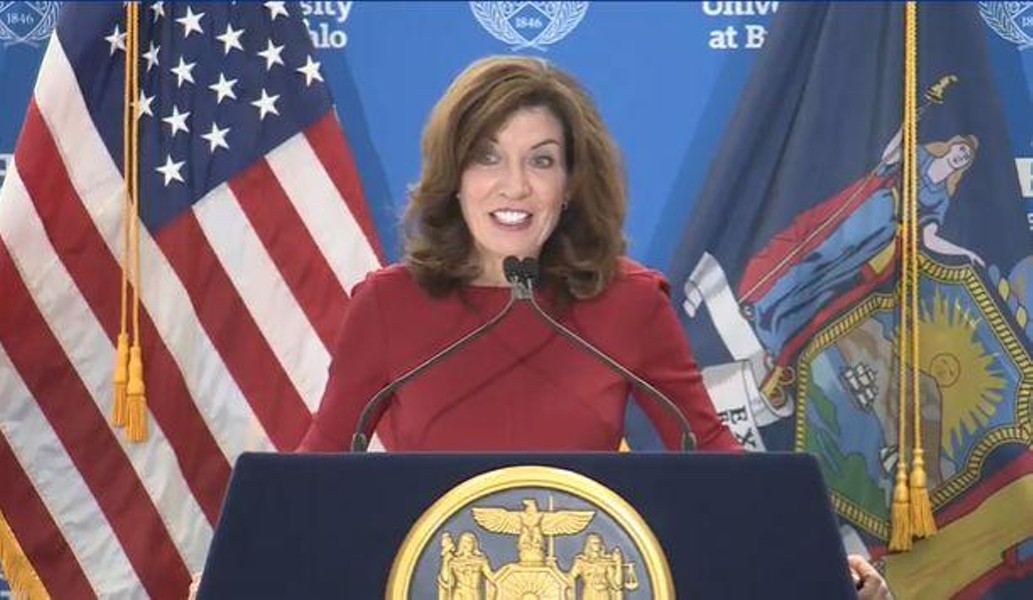 PROVIDED BY THE OFFICE OF THE GOVERNOR Gov. Kathy Hochul pledged $65 million to local governments to administer booster shots of the COVID-19 vaccine.
As millions of New Yorkers consider a booster shot of the COVID-19 vaccine, Gov. Kathy Hochul said Tuesday that the state would make $65 million available to localities for their distribution, saying local officials know best how to serve their own communities.

New York is also exploring additional vaccine mandates for state-run facilities, Hochul said, after the state did so for staff at state-run hospitals and nursing homes this month.

“We’re going to be exploring all of our options to expand this, expanding mandates, not test-outs, to all state-regulated facilities and congregate facilities,” Hochul said, speaking at the first COVID-19 briefing of her administration. “We have to let people know when they walk into our facilities that the people that are taking care of them with their loved ones in a setting are safe themselves, and will not spread this.”

Hochul didn’t say which facilities she was referring to, whether that would strictly mean state-run care facilities, like congregate housing for people with developmental disabilities, or if the requirement would extend to others, like state-run prisons.

Under current rules, workers at state prisons either have to be vaccinated or agree to be tested weekly for the virus. NYSCOPBA, the union representing correction officers in New York, is reportedly planning to sue over that requirement.

In the meantime, Hochul said localities in New York will take the lead on distributing COVID-19 booster shots, which the Biden administration has recommended for most individuals about eight months after their second dose.

“As soon as we get the approvals from the federal government to have the ability to do this, we’ll want to have the infrastructure in place to make sure that everybody gets a booster,” Hochul said.

While the state spearheaded vaccine distribution in the past, largely without local input, Hochul said her administration will trust localities to create plans that would best target underserved populations in their communities.

“You figure it out. You know your communities better than anybody,” Hochul said. “You know all the options. You’ve been there before.”

Hochul also repeated that masks will be required in schools for the time being when the school year starts next week, and that her administration is working on getting legal clearance to mandate vaccines for staff at those facilities.

As of Monday, about 77 percent of New Yorkers over the age of 18 had received at least one dose of the COVID-19 vaccine, according to the state.

Dan Clark is a host and producer at New York NOW.