Hochul, in first 45 days in office, has dealt with big challenges facing state

Kathy Hochul was thrust into the state and national spotlight this summer when she replaced former Gov. Andrew Cuomo, who resigned in disgrace over a sexual harassment scandal.

At the time, Hochul asked the public to give her 45 days to make the transition and start implementing key changes. Here's a look at what she's done in that time.

Hochul, a 63-year-old Buffalo native and the granddaughter of Irish immigrants, was a top aide to the late Sen. Daniel Patrick Moynihan and has held several elected offices, including Erie County clerk, congresswoman, and lieutenant governor. She was largely unknown to New Yorkers before Aug. 10, when Cuomo announced he was leaving office in two weeks.

Gov. Hochul hit the ground running. She assured New Yorkers that she would end the scandals plaguing the former governor’s administration, including an investigation into an alleged cover-up by Cuomo and his top aides of nursing home deaths during the COVID-19 pandemic, a state attorney general report that found Cuomo sexually harassed 11 women, and allegations of a workplace atmosphere of bullying and intimidation.

“At the end of my term, whenever it ends, no one will ever describe my administration as a toxic work environment,” Hochul said during her first news conference as governor-to-be, a day after Cuomo announced his intentions to resign. 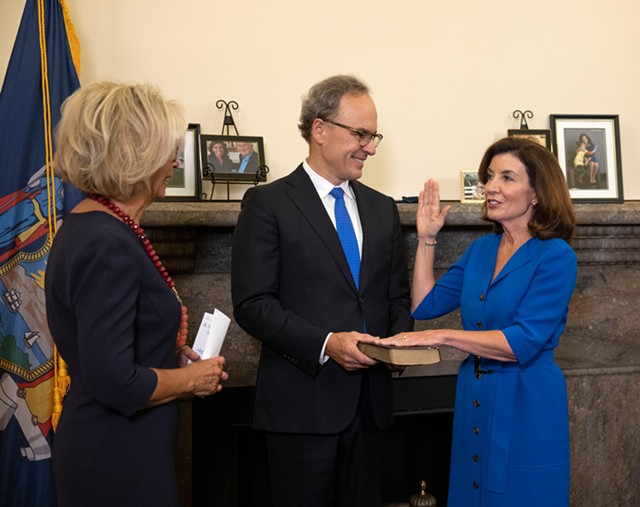 Hochul immediately replaced several top aides to Cuomo implicated in the alleged wrongdoing. She accepted the resignation of the state’s controversial health commissioner, Howard Zucker. And she is replacing Cuomo appointees to state entities, including the state’s troubled ethics commission, with her own choices.

The new governor tackled major challenges facing the state, including the ongoing pandemic and the spread of the delta variant. Within days of taking office, she imposed a mask mandate for schoolchildren and required all hospital workers to get a vaccine or lose their jobs.

Just one week into her term, she called a special session and succeeded in getting the Legislature to extend the state’s expiring eviction moratorium until January, avoiding a potential housing crisis.

She also dealt with two hurricanes in a 10-day period in late August that ravaged parts of downstate New York, flooding the subway system and drowning nearly a dozen people in basement apartments. 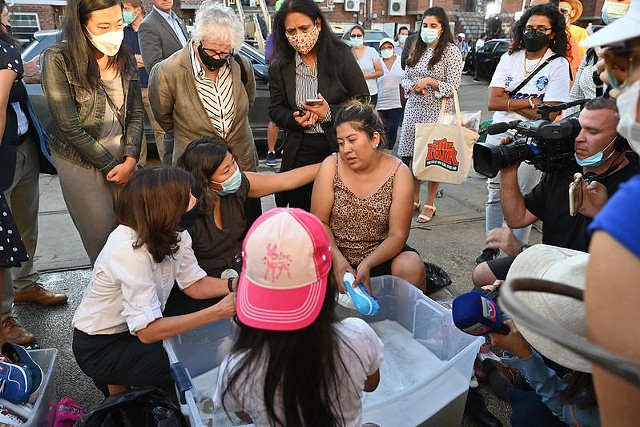 As the state’s first female governor, Hochul is aware of her national role. She’s appeared on numerous network news shows and the major news channels. She’s been outspoken on her opposition to a Texas law that bans abortion after the first six weeks of pregnancy, and she urged women from states where abortion rights are restricted to come to New York for help in obtaining the procedure.

“This is your safe harbor," Hochul said at a women's march in Albany on Oct. 2.  "You come to New York and we'll take care of you. We'll let you know that we protect your rights and we'll keep up that fight."

Alexis Grenell, co-founder of the public affairs group Pythia and a columnist for The Nation, said Hochul is the opposite of her predecessor in style and substance. Grenell said Hochul has a straightforward and no-nonsense manner, and approaches the job with a bit of humility.

“She has set a completely different tone for what leadership should look, feel, and sound like, and that is to her credit,” Grenell said. “It’s not ‘me first,’ but the public first.”

Steve Greenberg, spokesman for Siena College polling, said as recently as last April, more than two-thirds of New York’s voters did not know who Hochul was. A survey completed three weeks into her term found 42 percent viewed her favorably and had some confidence that she was up to the task.

“She’s been crisscrossing the state, working hard on a variety of different issues, and I think voters will soon get to know her more,” Greenberg said.

But he said it remains to be seen whether Hochul’s actions will ultimately make her popular or not.

“That will depend on how they react to her policies and the way she tries to implement them,” he said.

The governor almost certainly will still face a number of unforeseen events and crises. Portions of her vaccine mandate have been challenged in court, and the pandemic could once again worsen.

Hochul’s made clear that she intends to seek election to a full term next November. But the time is short to make her case, with the party nominating conventions set for February and a primary in June. She’s likely to face a primary challenge for her job — potentially from Attorney General Tish James, New York City Public Advocate Jumaane Williams, and New York City Mayor Bill de Blasio.