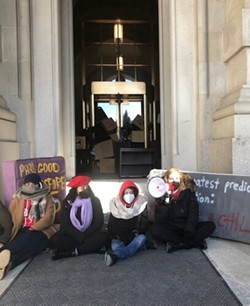 Protesters rallying against the end of New York’s eviction moratorium blocked one of the entrances to the State Capitol as Gov. Kathy Hochul confirmed that the tenant protection law will expire on Jan. 15.

A few dozen tenant advocates with the group Housing Justice for All braved Tuesday’s cold temperatures to rally outside the State Capitol. They barricaded one of the entrances to the building with furniture that they say could end up on sidewalks — along with renters — if the state does not enact new tenant protections before the eviction moratorium ends on Saturday.

Genevieve Rand of Ithaca said a measure known as the “Good Cause” eviction bill would protect as many as 4 million New Yorkers from rent gouging and arbitrary evictions. It’s already in effect in four cities in New York, including Albany.

“We need to pass Good Cause now,” Rand said. “There are dozens, if not hundreds, of legislators who are ready to vote for this bill today.”

They worry that without protections in place, the end of the moratorium could trigger a deluge of evictions in the middle of the winter and during a coronavirus surge.

But with the Legislature set to adjourn for the week on Wednesday, it seems unlikely that the bills could pass in time.

At the end of August, Hochul extended the moratorium, which began in 2020, for another four and a half months. Under its rules, tenants had to submit a hardship declaration to prevent an eviction proceeding from moving forward. Landlords were still able to evict tenants who are creating health and safety hazards or intentionally damaging property.

Hochul said she understands the growing anxiety, but said it will not be renewed.

“(It) is concluding very shortly,” Hochul said Tuesday during a COVID-19 briefing in Manhattan.

According to the National Equity Atlas, a research group based at the University of Southern California, nearly 600,000 New York households remain behind on their rent, for a total of $1.9 billion. Some are waiting for federal and state subsidies to be distributed, while many either did not apply for the programs or applied directly to their landlords for help.

Hochul said the Emergency Assistance Rental Program portal, which closed in November after exhausting its $2.4 billion in federal funds, was to reopen at 10 p.m. Jan. 11. A court ordered that the portal be reactivated, after the Legal Aid Society brought a lawsuit against the closure.

The governor said tenants who apply will have their evictions stayed for a short time. But she warned that the program still lacks funds, despite a request that the federal government shift to New York money from other states that have not used their allotment.

“We asked the Department of the Treasury for over $978 million of that money to come to New York to help our backlog,” Hochul said. “That money, despite efforts, resulted in $27 million. … So that’s not going to get us over the finish line.”