A disappearing bee population, Monsanto, and academia take the stage in the first production of Geva's 2019-2020 Fielding Studio Series, "Queen," which continues through November 24. This new play by Madhuri Shekar had its world premiere in April 2017 at Victory Gardens in Chicago, and has since won Outstanding Original Full Length Script at the New York Innovative Theatre Awards (2019) and debuted in Cupertino, Seattle, and New York City.

The plot follows Sanam Shah (Nikhaar Kishnani) and Ariel Spiegel (Marina Shay), PhD candidates who have been working on a groundbreaking set of research surrounding the disappearing bee population for the last seven years. A few days before they are scheduled to present their final data at a large academic conference and their professor, Dr. Philip Hayes (Ezra Barnes), is set to accept an award and announce their publication in the world's biggest science journal, Sanam discovers an error in the data — a situation which also happens right before her arranged first date with Arvind Patel (Nik Sadhnani). For the next 90 minutes, the audience is taken on a dramatic ride through higher ed, relationships, career sacrifices, and the choice between what's easy and what's worth fighting against. 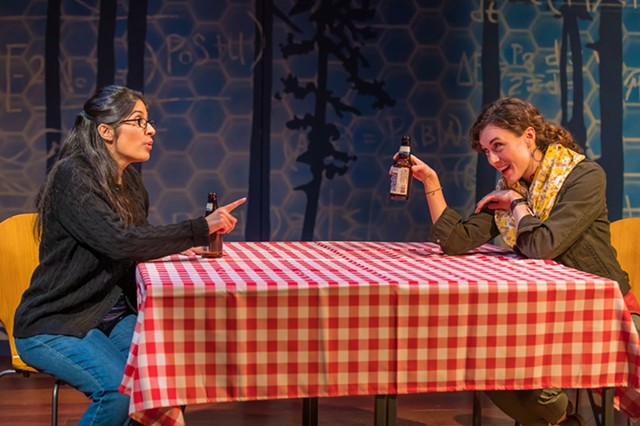 Geva's recently appointed Director of Engagement and Associate Artistic Director Pirronne Yousefzadeh (who directed "The Royale," "Heartland," and "The Lake Effect" in previous seasons) guides the intimate cast through this fast-paced production. The rapid scene changes and witty dialogue are reminiscent of beehive activity, with a constant flow and give-and-take between cast members. Even with no intermission, the show passes quickly, engaging the audience throughout. 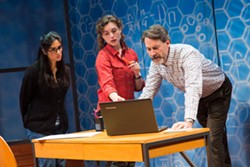 The cast is comprised of characters with powerful personalities, which makes each tête-à-tête quite entertaining. Shekar's dialogue is sharp, and all four actors perform with effortless, strong chemistry. Most impressive is Kishnani, who is part of both a friendship and a blossoming romance in the production. Her performance is endearing, capturing the focus and awkward tendencies of a lifelong academic while giving glimpses into a soft, kind heart.

Opposite Kishnani as her best friend and lab partner is Shay, who eloquently plays an ambitious, competitive single mother with a fiery passion for justice. Sadhnani charms as the suave playboy who's trying to settle down and start a family, his bravado masking a more vulnerable side. As professor and director of the lab, Barnes is imposing and, perhaps, has the most surprising character arc. Several intimate scenes have the potential to create uncomfortable moments, but are instead touching because the actors had a chance to work with local intimacy coordinator J.C. Meyer-Crosby and establish healthy ways for exploring the relationships onstage.

An aesthetically busy — but pleasing — scenic design by Reid Thompson features mathematical equations scribbled over three standing walls; the simple set transforms into a living room, office, lab, restaurant, backyard, and hotel room in hardly any time due to several pocket doors in the walls for moving furniture in and out, a sliding glass wall, and a fold-down bed to represent the hotel room. Lighting design by Reza Behjat sets specific tones, playing off the tension of each scene with moody blues and bright whites.

Geva announces 2019-20 season
The new season includes Tony Award-winning musical, "Once;" post-Vietnam hip-hop musical, "Vietgone;" and the world premiere of "Looks Like Pretty," which is set in a Kodak lab. More than half of the productions are written by and will be directed by women, three plays are written by playwrights of color, and five will be led by directors of color.
By Rebecca Rafferty
Theater

"Queen" is not a typical play. Usually, creatives steer clear of academics and math, but shows like this one, along with past Broadway hits "Proof" and "The Curious Incident of the Dog in the Night-Time," prove that there is a place for analytically-minded stories, especially when they include relevant issues. It's also immensely refreshing to find a plot about an Indian character (two, even), and read a playbill featuring an overwhelmingly female cast and crew. "Queen" is a fun, thought-provoking 90 minutes that brought the audience to its feet on Saturday, and will, no doubt, continue to delight for the remainder of the run.