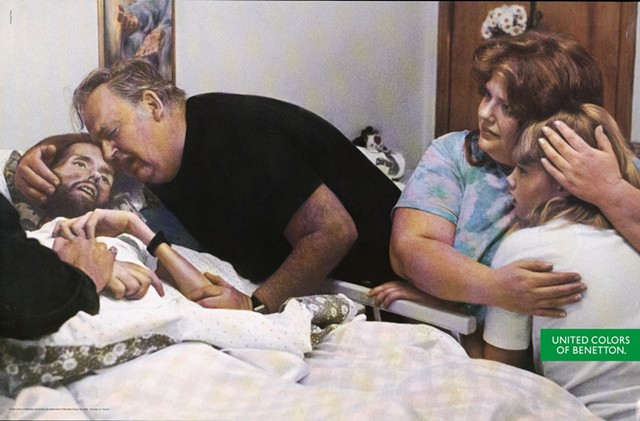 The image is so stunning it takes your breath away.

A frail young man, an almost Christ-like figure, lies on a hospice bed as his caregiver leans over him to give him a hug, one hand wrapped around the man’s head, the other hand holding onto his arm. Also at the bedside, the man’s mother and a young girl, embracing each other as they accept the inevitable: David Kirby would soon be dead of complications from AIDS.

The photo, titled “Final Moments,” was taken in 1990 by a young photography student named Theresa Frare. It took a curious journey. From the pages of “Life” magazine to, of all things, a clothing advertisement for the Italian fashion brand, United Colors of Benetton.

The world, and the fashion industry, was being hit hard then by the scourge of HIV and AIDS. There was no need for Benetton to add to “Final Moments” any text beyond the corporation’s name. The drama and the pain expressed in those four faces, reminiscent of a 17th-century baroque painting, said enough.

“There’s a very Renaissance-esque, a very, like, Passion of the Christ-esque element to it,” says Jessica Lacher-Feldman. “And that is very intentional.” 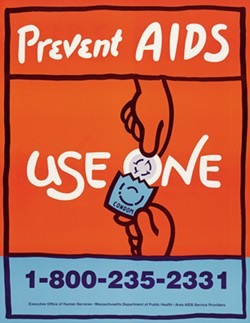 In her role as exhibitions and special projects manager, Lacher-Feldman sits in the midst of the University of Rochester’s collection of more than 8,000 HIV/AIDS posters. The collection, housed in the university’s Department of Rare Books, Special Collections and Preservation, is believed to be one of the largest of such material in the world.

“Final Moments” is just one of the startling images from “Up Against the Wall: Art, Activism, and the AIDS Poster.” Published this summer by Rochester Institute of Technology’s RIT Press, the book presents nearly 200 posters culled from the UR collection.

The book is also the gateway to a series of area HIV/AIDS awareness events in the coming months. Dec. 1 is World AIDS Awareness Day.

• Thomas Warfield, senior lecturer at the National Technical Institute for the Deaf’s Department for Performing Arts at RIT, and a community activist, assembled a World AIDS Day concert at the Memorial Art Gallery on Dec. 1 The museum’s Pavilion room will be stocked with community tables, arts and crafts, and an AIDS poster display.
• Alongside the book, the corresponding exhibit “Up Against the Wall: Art, Activism, and the AIDS Poster” opens March 6 at the MAG.
• Also at the MAG is the 5th Annual Anthony Mascioli Rainbow Dialogues on March 19. The event will explore Rochester’s response to the AIDS crisis from 1981 to the present.
• A series of films and documentaries focusing on the HIV/AIDS epidemic opens April 8 at the MAG, followed the next three weeks with showings at The Little Theatre, and a panel discussion following the final film on April 28.

Perhaps the most-astonishing aspect of “Up Against the Wall: Art, Activism, and the AIDS Poster,” is that it was assembled by one man. Dr. Edward Atwater was a member of the Department of Medicine at the UR, and was on the staff at Strong Memorial Hospital.

“He was wired as a collector,” Lacher-Feldman says of Atwater.

It goes back to when he was a kid, and we’re not talking baseball cards. The young Atwater collected pieces of pipe organs. But the UR’s Edward G. Miner Library reflects the interests of his later years: Books, periodicals, and a vast pile of medical-related research, including on women who graduated from medical school in the United States prior to the Civil War. 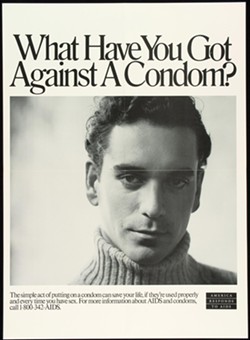 And where did the obsession with HIV/AIDS posters come from? A subway in Boston in 1990. A single, simple poster with a direct message: “Wear a condom.”

“It was an epiphany for him,” Lacher-Feldman says. “He said, ‘This is a sea-change moment. . . This is social history. We are seeing something very different.’”

“Even as a doctor,” she adds, “conversation on sexually transmitted diseases was limited.”

Atwater called the Massachusetts board of health and asked for a copy of the poster. And an obsession was launched that would consume him until his death in 2019 at age 93.

“I went and picked up posters at his house that he had gotten in New York maybe 2½ weeks before he passed away,” Lacher-Feldman says. 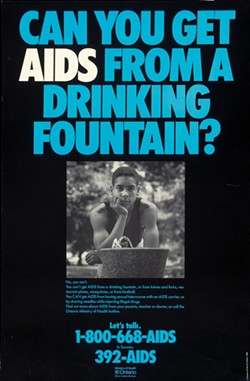 Atwater developed a network of friends and family members who helped him amass the collection, now housed in the UR’s Rush Rhees Library. Along with the 8,000-plus posters, there are another 7,000 duplicates.

Posters that offered a wide range of approaches as to how to deliver the message. Many were deadly serious, as with “Final Moments.”

“It was a very big change in the way that in America, and in other parts of the world of course, that we talked about safe sex,” Lacher-Feldman says. 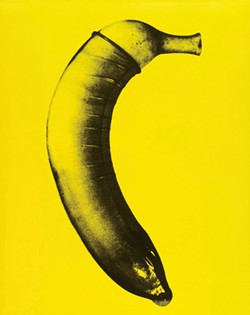 And many of these posters were humorous; fruits and vegetables aren’t just for meal time.

“He found those brilliant,” Lacher-Feldman says. “Not just that they were funny and tongue-in-cheek, but that they were effective. And I think that was part of the appeal in these posters. It’s by any means necessary. How do we get your attention, grab your attention, and say, ‘People are dying, you’d better do something, and you have to take personal responsibility?’”

Personal responsibility, Lacher-Feldman says, is a message that resonates today. “There’s wide parallels with COVID and the AIDS crisis in that way,” she says.

The posters also reflect geographic differences in the messages conveyed. 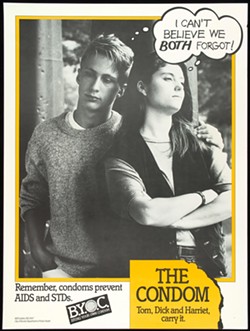 “In the United States,” Lacher-Feldman says, “it really became about gay male sex. And in other parts of the world, it’s just simply not the case. So that’s what’s so interesting to see, how the posters are reflected in places like Ghana, or South Africa, or Taiwan, or Hong Kong or the Philippines. How the approach, the audience, is very different, depending on where it’s from.”

So the AIDS Action Committee of Massachusetts pirates a Norman Rockwell painting, and plays it for humor: An adult, with an open book on his lap, lectures a cowering boy: “Don’t forget the chapter on AIDS!”

Yet death always lurks. Broadening the warning, Canada’s Ministry of Health and Social Services issued a series of posters that included a sleeping heterosexual couple wrapped in silk sheets; they’re not lying on a bed, but in a coffin.

The family of David Kirby, the Christ-like figure of “Final Moments,” did not see it that way, Lacher-Feldman says.

“The parents of this dying man said, ‘If this prevents one death, then good,’” she says.