History told by the survivors

UPDATE: The groundbreaking for the Seneca Art and Culture Center will be held on Monday, September 16, at 11 a.m., and the public is invited to attend.

One lasting effect of the actions of empires is that it can be difficult to locate the voices of the underdog, unmitigated by the interests of the victor. For this reason, it's critical that we support the endeavors of those who are the keepers of these arcane histories. Though pop culture and incomplete education lend themselves to the still-widespread notion that Native Americans are a fascination relegated to the past, there are more than 8,000 surviving members of the Seneca Nation in our region who can better tell the story of what was, what transpired, and what remains, with regards to their heritage. Their histories and contemporary lives are about to gain significant representation, as the dream to establish a Seneca Art and Culture Center at Ganondagan State Historic Site — a project nearly 30 years in the making — is on the verge of being actualized in Victor.

Ganondagan State Historic Site is located in Victor at Boughton Hill and Victor Holcomb roads. The state-run site marks the location of a major 17th-century Seneca town and palisaded granary, features a full-scale replica of a bark longhouse, and is host to many educational and recreational programs each year, including the Dance & Music Festival in July and the Winter Games & Sports Event in February.

The Seneca Art and Culture Center was first conceived when Ganondagan State Historic Site Manager G. Peter Jemison was hired in 1985. "There was an idea that we would eventually build some type of a center here even in our original master plan," says Jemison. The idea for the building went on the back burner while Jemison oversaw the reconstruction of a bark longhouse, completed in 1998, that would give visitors a sense of the living space of the Haudenosaunee (the preferred Native term for Iroquois). 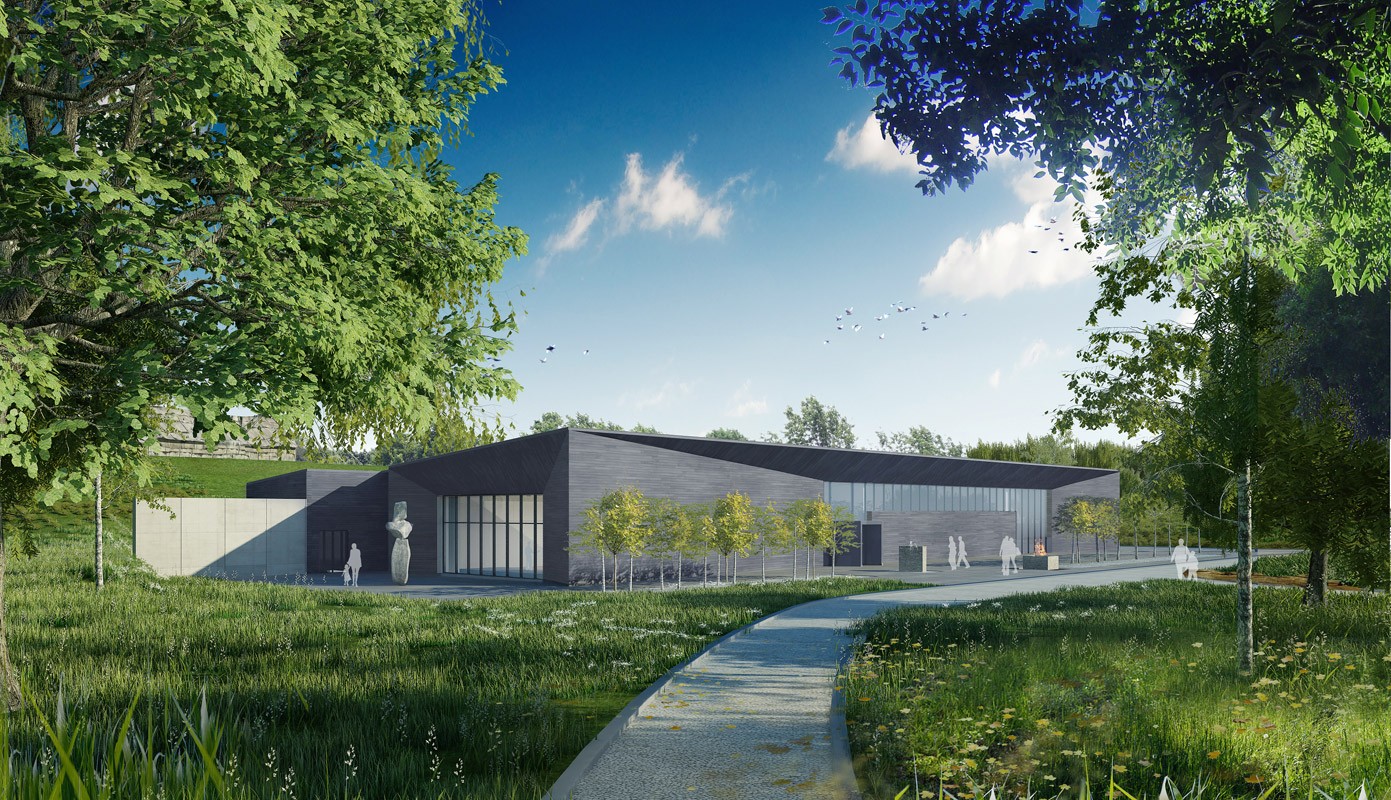 In 2003, the concept of adding a new building to the site was revisited, as New York State experienced economic difficulties, and Jemison became aware of discussion about closing some state parks and historic sites. "At that point, Ganondagan was basically just land," he says, noting the exception of the longhouse and a small visitor center. Jemison believed that preservation of and support for the site might be more secure if there was a permanent, year-round structure for displaying Seneca art and information about their cultural traditions.

While thinking seriously about how to begin the process of adding a building, Jemison attended an event in Arizona, and visited a new center that had been built to reflect the cultural traditions of one of the tribes native to that area. The idea of doing the same at Ganondagan seemed more possible. After initially securing the funds for an architect to design the space (Francois DeMenil Architect PC of New York City was chosen to design the space), Jemison has spent the past seven years on an emotional and financial rollercoaster, trying to secure the money required to construct the building. In the end, New York State, the Seneca Nation, and various foundations and private donors raised $10 million toward the project, which is set to break ground in September of this year, with completion projected for 2014.

The significance of the proposed site cannot be overstated. From 1655 to roughly 1687, Ganondagan was the capitol of the Seneca Nation, and remains one of the only interpreted Native American sites in the Northeast United States. Many who visit the site and learn about the Haudenosaunee stand in awe of what its people accomplished without the technology we rely on today. 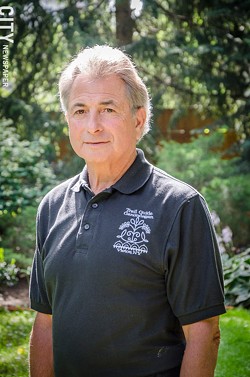 "For example, the Seneca in the 17th century grew 1 million bushels of corn. They didn't have tractors and tillers and all that stuff," says John Ninfo, a retired bankruptcy judge who now works as an outreach educator at Wild Wings (a not-for-profit educational organization that houses and cares for permanently injured birds of prey), as a trail guide at Ganondagan, and who serves as the building committee chairperson for the Seneca Art and Culture Center.

Two interpretations Ninfo likes to tell in particular are about the influence of the Iroquois Confederacy had in shaping the government of the United States of America, and the equal role of women in the Haudenosaunee culture (which our founding fathers did not adopt).

"What I didn't know until I started studying this, even though I am a lawyer and a federal judge, and took Constitutional law, is the influence of the whole Iroquois or Haudenosaunee Confederacy on our form of government, on our democracy," Ninfo says. "There were no democracies for Franklin, Marshall, or Jefferson to be looking at. There were only monarchies at that time, and Greece and Rome weren't true democracies."

History shows that early statesmen met with Haudenosaunee representatives before the Continental Congress in 1774. In 1988, the Senate passed a resolution acknowledging the influence of the Haudenosaunee or Iroquois Confederacy in the development of the U.S. Constitution.

Ganondagan currently has an annual visitorship of between 35,000 and 38,000 people from all over the world, while the site is open to the public, from May to the end of October. Jemison says that Ganondagan does outreach during its off season, including lectures and presentations at Nazareth College, programs at the Memorial Art Gallery, and a Native American film festival with Monroe Community College, RIT, and the University of Rochester.

When speaking with visitors to the site, Ninfo says he tells them, "I hope that Ganondagan's going to be your window into a lot of the important history and culture of the Haundenosaunee and the Seneca Nation, and what we have come to know as the Iroquois Confederacy."

The addition of the Seneca Art and Culture Center will greatly expand this window. "This is going to enable us to tell more of the story in more visual ways," Ninfo says. The center is geared to increase tourism to the region, and "will put Ganondagan up there as the true treasure that it is for this area," says Ninfo.

The 17,000-square-foot building is designed to operate year-round. Green building elements are being tested for incorporation into the center as well, including a geothermal heating and cooling system, and specific window design to take advantage of natural light and help control energy flow. The building will stand in a clearing surrounded by trees and native plants, to give a sense of what approaching the Seneca community would have been like, and there will be water and fire features on the outside of the structure to symbolize welcoming.

"School systems are experiencing reduced budgets," says Jemison, and as a result, Ganondagan has seen a decrease in groups able to visit the site, as the cost of the bussing children became prohibitive. "Even if it isn't as good as the real visit, we at least reach out to them and give them the opportunity to learn first-hand from our presenters," he says.

The site is projected to open in 2014, and when it does Jemison envisions an orientation theater featuring short videos "that will introduce some of the stories of our people that require more than static objects in a case, that require a performance, or animation," he says. A gallery area will serve to generate revisits to the center through a series of changing exhibits of artifacts, art, and ethnographic material, some of which might feature work by members of other Native nations. Quite a sizable collection of artifacts which originated at Ganondagan are currently housed at the Rochester Museum and Science Center, at the New York State Museum, and other locations, and Ganondagan organizers will eventually generate requests for their release to the center.

"We also want to give people something that shows people how the town was possibly laid out," says Jemison. "So we're creating a 3D topographic map that will give a bird's eye view of how the landscape might have appeared," he says. In addition, organizers are planning to include a sophisticated model of a bark longhouse to have something to show visitors when bad weather prohibits venturing into the full-scale replica currently at Ganondagan. The center will also include an area about the history of Ganondagan.

Before the region was colonized, the Seneca survived by hunting, fishing, harvesting, and foraging. "We were able to survive quite well; we were able to maintain ourselves here. And those times are not really well understood," says Jemison. "The picture of us, if it's there at all, sort of telescopes down into the time period when we're only in conflict with Western countries coming here. Not the time period when we were here, for eons, living freely. And that sense of that is hard to convey, but it's very important."

A crucial matter is the living-history aspect of the Seneca Nation, which will be reflected in some of the center's exhibits. "We want an area that is an expression of the community, what is our present like, and what is it that we want people to take away, so that they will understand us," says Jemison. Contemporary understanding of the Seneca is usually framed by the current political conflict is, he says. But that's only a small part of who the Haudenosaunee are.

While the center will include many historical aspects in terms of artifacts and ethnographic material, Jemison plans to help tell the current story of the Seneca through contemporary art. "I think our artists are really visionaries," he says. "They understand something, or they sense something, and it's not a literal translation of it, or a literal depiction of it. But it gives a certain feeling that I think is essential to help people understand the living culture."

Though certain Haudenosaunee traditions, such as lacrosse, have permeated contemporary culture around the world, Jemison says far too little is understood about contemporary Native Americans. "People don't know much about where we are located," says Jemison. "Where do we live today, where are our communities? How are our communities governed? What is our relationship to the federal government, and what is that founded on?"

One way the Seneca educate others about themselves is by maintaining the annual commemoration of the Canandaigua Treaty, which Jemison calls an expression of the Haudenosaunee understanding of their sovereignty, of their treaty relationship with the United States, of their rights as they have articulated them, and their agreements with existing countries. "That is still present in our thinking, and people need to somehow or other understand that," he says. The annual Canandaigua Treaty Day will be held on November 11 at Canandaigua Primary School.

The Seneca Art and Culture Center will fulfill the need to share the beauty that is expressed in Native art, as well as the political reality of contemporary Native American life, says Jemison. "There is a need for that which survives in our communities and is very visible, like lacrosse, and then that which is less visible but which is part of us. And we somehow need to translate that a bit, and that is the spiritual connection that we have to this place, which is part of the world from which we come," he says. Through the combined efforts of all of the exhibits and site interpretations, the new center will offer the opportunity to better understand the Native Nations as they were and as they are.

Though the building project is funded, a Signatures of the Seneca capital campaign is in motion to endow the center with funds to grow and support programming. Learn more and get involved by visiting ganondagan.org.

City will provide additional coverage on the Seneca Art and Culture Center closer to the time it opens to the public.