History, activism, and resilience in the 19th Ward

Joanne DeMarle and MaryDan Cooper are proud, active residents of Rochester's 19th Ward. The idea of living in some other city neighborhood or moving to the suburbs bewilders them.

"Why?" DeMarle says. "It's a very friendly neighborhood. I have lived my whole adult life in this neighborhood. If I had lived somewhere else, I don't know that I would have known my kids' friends or become friends with their parents."

DeMarle and Cooper don't think of themselves as crusaders who refuse to leave the southwest city neighborhood where they've put down roots, bought homes, and raised families. So they're a bit muddled by the sometimes unfavorable image others have of the 19th Ward, and they're hardly alone.

Even among Rochester's pricier neighborhoods that have strong support from homeowners and businesses, the 19th Ward's history of commitment from residents is rivaled by few. The first recorded meeting of the 19th Ward Community Association took place on July 19, 1965, at Calvary Baptist Church. That places it among the oldest continuously operating neighborhood associations in the country, neighborhood leaders say.

About 300 residents gathered at the church in 1965 and envisioned a stable, integrated, urban residential community. And it's a vision that the neighborhood has not wavered from.

Residents are celebrating the 50th anniversary of the 19WCA with a variety of events this year. Perhaps the most important is the association's self-guided house tour, which is from noon to 4 p.m. on Saturday, October 17. Tickets are $10 in advance and $12 the day of the tour, and are available at Aenon Baptist Church, 175 Genesee Street. Information: 328-6571. 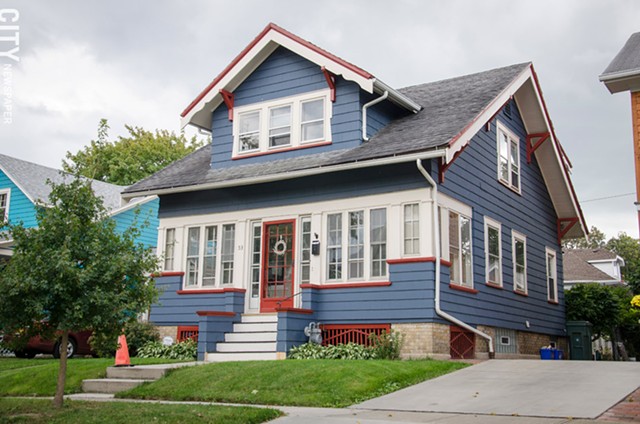 Cynthia Howk, architectural research coordinator with the Landmark Society of Western New York, will give a talk on the neighborhood's architecture at 11 a.m. before the tour.

The 19th Ward, with roughly 22,000 residents, is one of Rochester's largest neighborhoods. It's located in the southwest section of the city close to downtown, major highways, parks, and the airport. The neighborhood is bounded by Buffalo Road and West Avenue to the north, Genesee Street and Elmwood Avenue to the south, Genesee Street on its east side, and the Erie Canal to the west.

It's a neighborhood of tree-lined streets and many large, older, brick and stucco homes, commonly boasting wood trim, stained glass windows, and hardwood floors. Properties range in price from about $60,000 to about $180,000, and attract everyone from artists and working-class families to upscale professionals and city leaders.

But little of that explains the success of the 19th Ward. A mix of history, activism, and resilience has made the 19th Ward what it is: one of the most racially diverse communities in the region.

"We don't all look and think the same," DeMarle says. "It's OK that my idea of a garden is different from my neighbor's."

The 19WCA was formed in part to combat redlining and blockbusting — tactics that some realtors and lenders used primarily in the 1950's and '60's to prevent black homebuyers from purchasing in predominantly white neighborhoods.

Residents organized against the practice, a contentious decision at the time.

"Some residents put signs in their windows saying, 'I'm Not Going,'" Cooper says.

"They wanted this to become an inclusive neighborhood where everyone is welcome," DeMarle says. "One of the tools they used to fight this was the house tours to show people this amazing housing stock."

That same level of organization even today is something of a 19WCA trademark. The neighborhood is divided into 22 districts, and each one elects delegates who meet each month — though anyone can come to the meetings.

"The bylaws have only been tweaked a couple times over all these years, which I think says something," Cooper says. "We work well together and there's plenty to do."

She says that volunteering is a sign of health in a neighborhood.

"There's always a need for volunteers," Cooper says. "Here I feel like they really need me and I'm doing something important."

When residents learned in 2012 that School 16, a favored neighborhood elementary school, was scheduled to be closed, they immediately organized to block it. The 19WCA's education committee and the SouthWest Common Council — which is comprised of representatives from all the neighborhoods in the Southwest Quadrant — aggressively lobbied Rochester Schools Superintendent Bolgen Vargas to keep School 16 open.

The school, which is partially a wood-frame structure, was in serious need of repair, and the cost of improvements, according to some reports, exceeded the value of the property.

"The decision was suddenly made by [the district's] central office to close the School 16 building on Post Avenue and that the students and staff would be relocated to Freddie Thomas across town," says John Boutet, an education activist who lives in the 19th Ward. "We were told there are too many rodents, the boys' rooms smell, and the heating system controls don't work properly."

While some of those concerns were valid, Boutet says, the school plays a crucial role in the vitality of all of the southwest neighborhoods. Residents managed to convince Vargas to include School 16 in the second phase of the district's massive $1.2 billion schools modernization program, and the school building should be renovated and reopened around 2018, Boutet says.

A similar battle ensued to prevent School 10 and School 44 in the southwest section of the city from closing — this time more as a result of low student performance. Despite strong resistance from residents, Vargas and the school board made the decision to keep School 10 open and eventually close School 44.

But even with a strong, highly organized neighborhood association; significant capital investment in the Brooks Landing development; improvements to Thurston Road; and increased engagement with its powerhouse neighbor, the University of Rochester; parts of the 19th Ward continue to be dogged by crime. It's an issue that provokes a strong response from residents who often say that the image of a crime-ridden neighborhood doesn't at all match the reality of the 19th Ward.

Still, the fatal shooting at the Boys & Girls Club on Genesee Street in August shocked the entire region. Three people died in that incident, and four others were injured.

Rochester school board member Mary Adams says that she's not indifferent to crime, but that she likes living in the 19th Ward and wouldn't hesitate to recommend it to a young couple considering buying a home.

"Violent crime is a citywide crisis that is painful no matter where you live, because the impacts on victims and families do not have boundaries defined by blocks," she says.