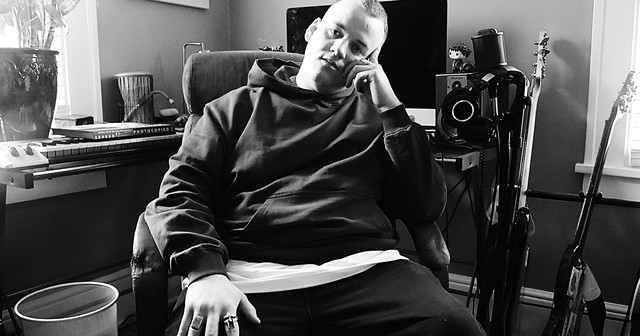 For the better part of three years, fans of Jordan Moss have known him as the rap artist King 20/20. The alias sprang, he says, from the idea of being a “king of vision, king of seeing things through, and being clear-headed.”

But the name has also become a kind of self-fulfilling prophecy, a cosmic callback that brings things full-circle for the musician and poet from Rochester, by way of Canandaigua. The year 2020 marked something of a metamorphosis for Moss — both musically and personally.

He moved toward a more instrumental, film score-inspired sound, and away from a dependence on alcohol.

The changes culminated in his new, electronic-infused album “These Streets,” released in February. The largely instrumental collection of 10 songs was conceived as the soundtrack to a poetry book of the same name written by Moss and his uncle, John Burgess, and published in November 2019. 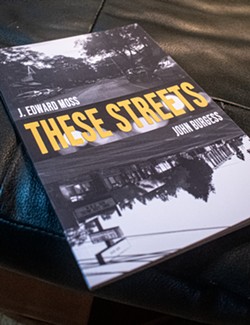 By that time, Moss had created the groove-oriented tracks “Another Year” and “Above,” which would become the easy-listening hip-hop bookends of the album. As the realities of the pandemic set in, with their extended quarantines and opportunities for self-reflection, Moss found himself gravitating away from rap entirely as he completed the rest of the album.

It was a stark departure from the King 20/20 catalog, but he committed to the stylistic change, finished writing the record, and produced trippy, abstract music videos, or “visualizers,” for the tracks “Don’t Stay Cheap,” “Metropolitan Scene,” and “Pulse Riff.”

“I didn’t really know at that time that I was going to pivot away altogether when I started making the record,” Moss, 28, says of his shift away from rap music. “But with me, if I’m going to work on something I’m really going to throw myself into it 100 percent.”

Toward the end of King 20/20’s rap phase, the music was brimming with swagger. Moss calls it “bragadoccio records.” He says he found himself running out of meaningful things to say, and playing a character that didn’t relate to his life experiences.

“I feel like I just didn’t really know what my voice was anymore, and I kind of felt like I could define a personality for me as an artist better, doing electronic or singing,” he says. “I don’t think that that cape, wearing that — it just didn’t make sense anymore.”

Before Moss turned the page on a musical chapter that had him feeling inauthentic, he released the rap single “Stupid Dumb,” a revealing rebuke of his past mistakes with drinking and driving:


The release of the song, on New Year’s Day 2020, was a wake-up call for Moss, who says he stopped drinking three weeks later. But the artist’s journey toward his now 14-plus months of sobriety may have started much earlier, with the event he recounted in “Stupid Dumb.”

In 2018, Moss recalls, he was charged with impaired driving. “The messed-up part was, it wasn’t really a turning point,” he says. “You know, it should have been.”

Moss had been working as a bar back at Swan Dive and Bitter Honey. He describes working 13-hour days and being surrounded by people who enabled his heavy drinking. When he interacted with others outside of a bar, he was frequently hung over.

Months after his impaired driving charge, Moss’s drinking habits were wearing on him, but he was unable to stop. “I just realized that I’m a person that just shouldn’t be near alcohol,” he says. “I can’t just do the one-drink thing. I always had the ‘more’ gene.”

He now refers to alcohol as “a distraction and an impediment” that would have prevented him from completing “These Streets.” He has since changed his living arrangements, having moved into an apartment with his girlfriend and getting a dog.

“I was definitely a child,” Moss says of his mindset before sobriety. “And still, even in this last year, I’m finding out, ‘Who am I without alcohol?’”

Lincoln All, a musician who mastered “These Streets,” provided what he calls a “second set of ears,” balancing the various frequencies of the tracks and imbuing the music with subtle spatial qualities that added more ambiance. All attended Nazareth College with Moss and the two gelled over their mutual love for hip-hop, sound design, and music production.

“I don’t want to say that he was not working when he wasn’t sober, or anything like that,” All said. “But there’s a definite difference, I think, since he has been sober.”

Despite Moss’s shift away from lyric-laden rap songs toward electro-pop soundscapes that draw from hip-hop, R&B, dance, and ambient music, King 20/20 hasn’t changed entirely. His sound still has his signatures, such as a subterranean bass that conjures images of an all-night rave and melodic hooks that recall a wailing siren.

Moss says that as he gets older he doesn’t want to be pigeonholed as a rapper.

“I’m not sure exactly where I’ll land, ‘cause I still am kind of defining what King 20/20 will be into the future,” he says. “But I definitely will keep on with the instrumental and probably ditch the rap, but pick up singing. I quite like it.”