New York State Police said the felony charges include six counts of first-degree sexual abuse and five counts of second-degree course of sexual conduct against a child. Ashton, 51, also faces nine misdemeanor charges of endangering the welfare of a child.

State Police said there are nine victims, all boys between the ages of 8 and 12. The current allegations date back to 2017, and all the incidents happened at the school.

“This guy is charged with protecting, guiding and mentoring these children,” he said. “We drop our kids off every day to this guy, and he does this, allegedly, it’s the worst thing that can possibly happen, in my mind.” 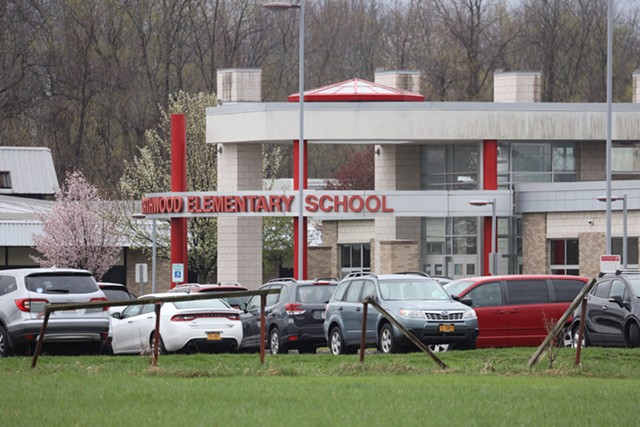 Forsythe accused Ashton of using the boys' "innocence and trust to violate them."

“These courageous little men, in the face of fear and uncertainty, showed their bravery and came forward to tell their story. Those of us in law enforcement are now charged with ensuring justice for them and their families.”

She said Thursday that they can’t provide many details because of the nature of the case.

“All we know right now and all the community needs to know is that we have nine victims that are named in these complaints and the potential for so many more,” she said.

The Hilton Central School District issued a statement late Wednesday saying that it informed staff and parents on April 8 that Ashton had been placed on administrative leave pending an investigation. It also said State Police informed the district late Wednesday that Ashton would be charged.

"The school district acted swiftly in this matter and has been cooperating fully with the State Police," the statement read. "Our primary concern is for our students. Our district crisis team has formulated a plan to support students and staff, and counselors are available for students throughout the day. In addition, the district has been working closely with the Bivona Child Advocacy Center throughout the investigation and will continue to do so."

The Rush-Henrietta Central School District posted an online statement noting that Ashton taught for the district from 1996 to 2004 at Vollmer and Leary elementary schools.

Maj. Barry Chase with State Police Troop E and others on Thursday credited Bivona's training at Northwood Elementary with bringing the incidents to light.

"That likely led people coming forward," Chase said, adding that a tip came in through the state child abuse hotline on March 26.

Deb Rosen, Bivona's executive director, said children are taught that "their bodies are their own" during the training.

"And that they are in charge of who gets to touch their body, look at their body, take pictures of their body, who when and where that happens," she said. "We are also teaching children that it's very important to know who their safe adults are and to identify people in their lives who are the safest for them to talk to and to come forward with any worries of concerns they have to those safe adults.”

A message to parents from the district advised anyone with concerns to contact Bivona at 585-935-7800 or Bivonacac.org "for a checklist for what to do if you suspect child abuse, who to call, common questions, and guidelines for age-appropriate conversations. If a child makes a disclosure, or you suspect that something has occurred, please contact the New York State Police at 585-279-0144.”

Rosen acknowledged how shocking and upsetting the allegations are for parents and the community at large.

"It really cuts to the core in our belief in authority and our belief in, sort of, the safe and trusted school environment," she told WXXI News.

Rosen said schools and other institutions that serve children must do more than periodic employee background checks.

"They need to have mechanisms in place that regularly check in on the emotional and mental wellness of their staff and on the interpersonal habits of their staff," she said. "It's difficult to describe what that looks like, but there does need to be some system in place."

Rosen said adults should be aware of any abrupt change in a child's behavior or demeanor that may be indicative of abuse, like suddenly withdrawing or avoiding certain adults or situations.