With spring in bloom at Highland Park, volunteers are beautifying one garden bed that serves as a living memorial to hundreds of people whose remains were discovered in an unmarked mass grave.

Among them is Gillian Conde, vice president of DePaul, a nonprofit organization that provides support services and housing for people with special needs, including mental illness.  As she and others clean up the garden, she plans a tiny periwinkle vinca vine next to a wooden bench.

“It does a couple of things," Conde says. "It holds back the erosion, and it also just makes a beautiful ground cover.”

Conde and about 15 other volunteers are weeding, mulching, raking, and planting along this circular batch of garden as part of an early session of United Way’s Day of Caring, which is officially on May 13.

Facing south are three benches with canopies. In the middle is a stone with a plaque dedicated to those whose remains were discovered in 1984 in a mass gravesite here. They were believed to be residents of Monroe County’s former Almshouse, Insane Asylum, and Penitentiary, which was located here in the 1800s.

“This is not a unique place,” Conde says. “Unfortunately, this is very, very common that people that had been in poverty that had special needs that were incarcerated are the forgotten people who have been buried in mass graves.” 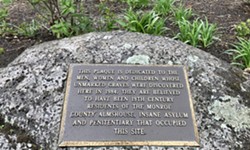 She and others from DePaul discovered the plaque marking the gravesite of about 800 people, and started a grassroots campaign to create this memorial garden about 12 years ago.

Along the ground are stones, some engraved with names and messages. One reads: “Friends remembered.“ Another: “Dignity, Respect, and Love — Key to recovery.” It's signed by the New York Association of Psychiatric Rehabilitation Services.

For Len Statham, the graves, the messages, the garden — it’s personal. Statham is the chief operating officer at NYAPRS, a statewide coalition of mental health providers and peers. Peers are people with a managed mental illness who help others get their needs met and get to a place of “recovery” where they can thrive.

He couldn’t make it to the garden cleanup because of a board meeting, but he says it’s a site of great significance to him. It offers long-overdue dignity to people whose mental illness became a life sentence. He says thankfully, that’s not the case today.

“People come in and out of facilities, and now … thank God we have community-based mental health services where people can go and function and have jobs and purpose and live with a mental health condition,” he says. 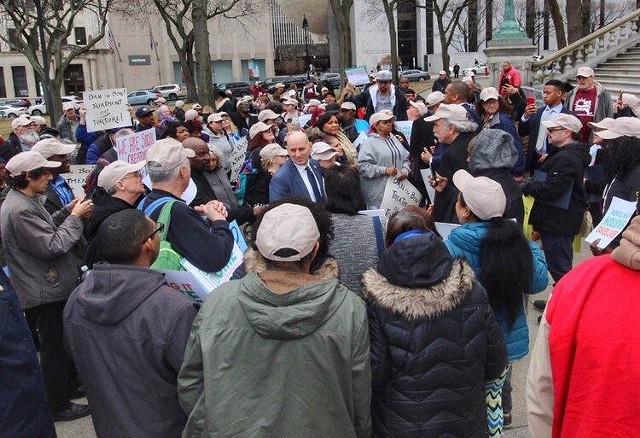 NYAPRS was founded in 1981. It formed out of human rights and social justice movements led by people with mental illnesses and people who were institutionalized — movements like the Insane Liberation Front, the psychiatric survivors movement, and the formation of “clubhouses."

Clubhouses are community centers that provide opportunities for people with mental illness to build long-term relationships. Positive relationships are crucial to recovery, and can provide a support network that allows someone to get an education and maintain a job.

The first was Fountain House in New York City in 1948, but the model wasn’t widely adopted until the late 1970s.

She says the model works because mental illness symptoms often ebb and flow, and so the support can be there when it’s needed, and be on standby when it’s not.

“No two people have mental illness the same way, so you can’t have one size fits all,” Conde says.

Chris Tolhurst, who has also been planting and mulching in the Remember Garden, was part of DePaul's efforts to implement supportive housing 30 years ago. At first, the practice wasn’t widely accepted, he says.

“People were afraid that it was going to be a disaster for people that they were going to be out in the community without the supports they needed,” Tolhurst says.

Then expectations shifted from keeping people out of state hospitals to helping people get jobs, and live full lives like anyone else. However, Conde says it’s a challenge to build more supportive housing, because it takes getting neighbors on board.

“Sadly, every time, a huge amount of time is spent on educating people on who these people are and pushing back on all the stigma,” she says. 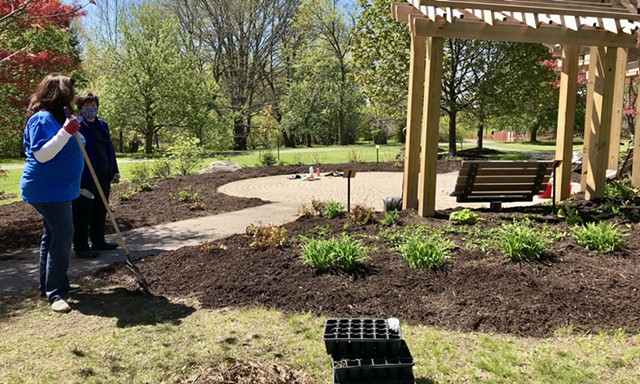 A couple of years ago, when Conde was trying to set up a housing unit for people in need in the village of Perry, there was the usual pushback. Village Mayor Rick Hauser stepped in, Conde says, and through community question-and-answer sessions, there came understanding and acceptance. The unit, a former knitting mill converted into apartments, was built in 2019.

“He really pushed the narrative," Conde says. "He recognized the need for it, he recognized it would be a stable force for people.”

But even with the struggles today, Conde says, it’s important to acknowledge how far mental health treatment has come, and to honor those who were locked away, mistreated, and then forgotten in unmarked graves.

Even if it is through the simple act of planting flowers.