Here's how you can make corn dogs, fried dough and other festival food favs at home 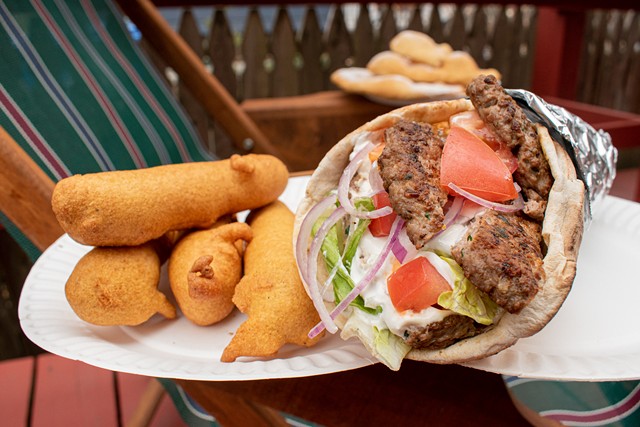 For the past two years, the pandemic led to the cancellation of many regional summer festivals, and made us miss out on all the music, the art vendors, and reveling in the sun that makes the long winter worthwhile.

And let’s not forget the food. Wandering from booth to booth with some sort of fried food on a stick in one hand and a messy confection in the other is an essential part of the season. Many of the cultural fests open up a wide world of flavors for our curious palates.

The festival setting, like a trip to the movies, comes with a permission slip to fill up on foods you likely wouldn’t prepare and eat at home. But the good news is you can cure your craving for some of the classic festival foods in your very own kitchen.

Most of the annual festivals have announced plans to return this year; but after two years of playing life by ear, we know how best laid plans can go. Regardless of whether the festivals take place as scheduled, follow these recipes for homegrown versions of corn dogs, gyro pitas, and fried dough all summer long. 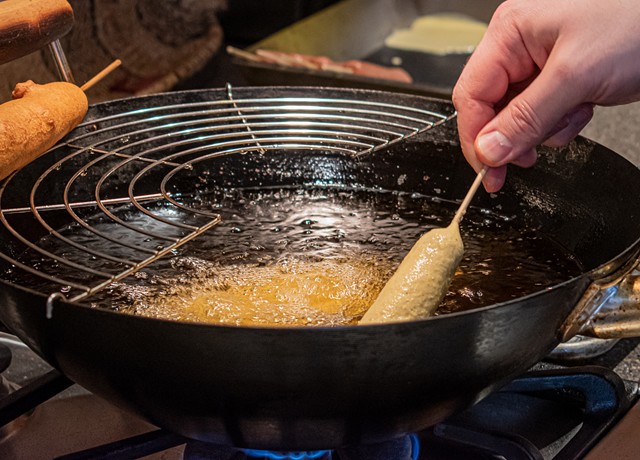 Possibly the most iconic of all festival foods that come on a stick, the corn dog is an American classic. Various state fair vendors and restaurants across the U.S. claiming to have invented the dish in the 1940s. Corn dogs are unrivaled in the fun-to-eat department and they are fairly simple to recreate at home. They’re also easily modified into a breakfast option by subbing in pre-cooked sausage and pancake batter.

Step 1: Mix the batter
In a stainless-steel bowl, combine the cornmeal, flour, baking powder, eggs, milk, salt, and pepper and stir until blended, adding additional milk as needed for a thick batter consistency. Allow the mixture to rest and thicken for 10 to 15 minutes prior to frying.

Step 2: Prepare the hot dogs
Insert the wooden skewers into the hot dogs, allowing about one inch between the tip of the hot dog and the pointy end of the skewer.

Step 3: Fry the dogs
Use a wok or deep cast iron pan with enough oil to float the corn dogs in andpre-heat the oil on a stovetop to 300 to 350 degrees. Roll the skewered hot dogs in the thickened batter and fry the corn dogs two or three at a time, turning as needed with tongs, until golden brown and puffy. Remove from oil and let drain on a wire rack. Serve warm with classic yellow mustard for dipping, or the condiment of your choice. 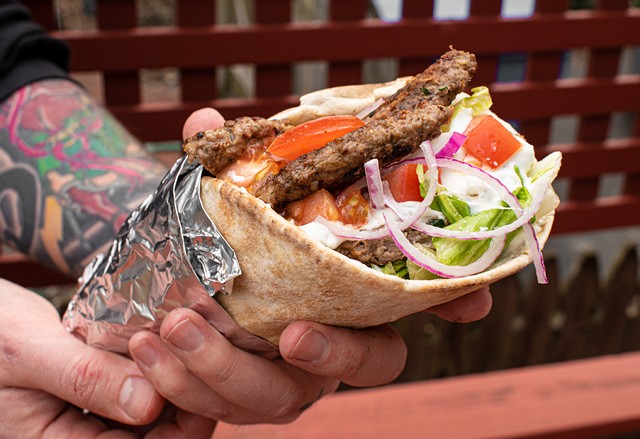 AT-HOME GYRO WITH HOMEMADE TZATZIKI
Serves four to six
The gyro has curiously become a staple at any carnival, festival, or fair over the past several decades, as ubiquitous as the funnel cake or Italian sausage & peppers. The traditional Greek-on-the-go pita dish is traditionally made by slow-roasting layered pieces of spiced lamb on a vertical spit, and the meat is then shaved off to order. For this at home version we eliminate the spit in favor of the trusty grill and frame the gyro as a deconstructed burger.

Step 1: Making the tzatziki
Carefully wash, drain, and pat dry the parsley and dill. Combine with the cucumber, yogurt, garlic, lemon juice, water, salt, and pepper in a food processor or blender and pulse on a low setting until the mixture reaches the desired consistency (thick or thin), fine tuning with additional yogurt or water as needed. This sauce should be prepared at least 30 minutes before cooking and allowed to rest in the refrigerator prior to serving. Tzatziki will keep well in a refrigerator for up to three days.

Step 2: Prepare the burger
In a mixing bowl combine the ground lamb, onion, egg yolks, parsley, cumin, salt, and pepper, and mix well. Allow the mixture to rest in the refrigerator at least two hours (or overnight) before cooking. Form into 1/4 to 1/2 lb. patties prior to cooking (depending on preference).

Step 3: Grilling the burgers
Starting your grill on a high heat, sear the burgers on both sides and reduce to medium high heat (if using gas) and allow to cook to desired doneness. Ideally you want them to be nicely seared on the outside, very rare in the middle. Cooking time will vary depending on your equipment, but a good rule of thumb is 10 minutes per inch of thickness. So, if your burgers are about one inch thick, they will need roughly 5 minutes on each side.

Let rest five minutes before serving, then chop the burgers into strips. Best served with chopped lettuce, tomato, and onion, all rolled up in a fresh pita with a drizzle of tzatziki. 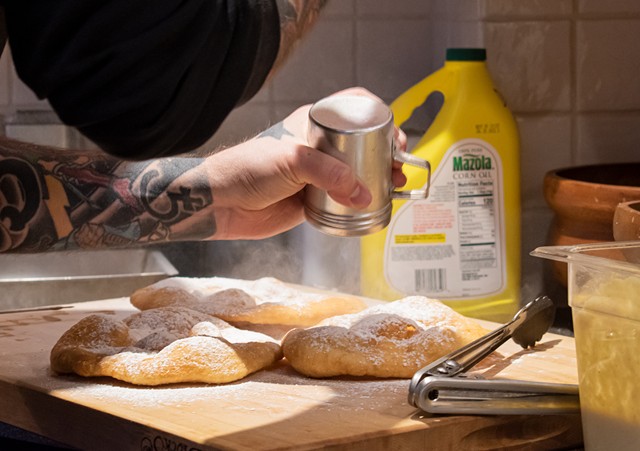 FRIED DOUGH
Serves four to six
Fried dough is one of those foods that can instantly transport an adult directly back to their childhood and memories of sweet treats. Not quite a doughnut, not quite a funnel cake, and almost always associated with carnivals, festivals, fairs, or amusement parks, fried dough goes by many different names. Some call it fry-bread. Some call it an elephant ear. Still others call it a zeppole. Whatever name you know it by, it’s easy to make at home. You can use store-bought pizza dough to simplify the process, but the real joy of making fried dough at home comes from making the dough from scratch.

Step 1: Overnight starter rise
In a stainless steel bowl mix one cup of white flour, one teaspoon of rapid rise dry yeast, and one cup of lukewarm (not hot) water and mix until it is an even consistency. Cover the bowl with a cloth towel and let sit at least 12 hours before you intend to continue the dough-making process.

Step 2: Finish the dough
Seven to eight hours before you plan to make the fried dough, take your starter and sift in about two cups white flour, two teaspoons of olive oil, one teaspoon of salt, and one egg white, and stir until the mixture is thick and even. Turn the dough out onto a floured surface such as a large cutting board and work the dough until it has a smooth and glossy texture, adding additional white flour as needed but being careful not to get the mix too dry. 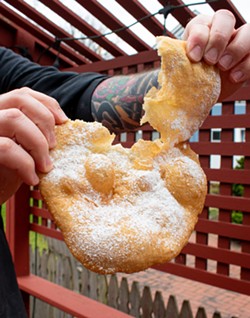 Take a clean stainless steel bowl and lightly dust with additional flour. Work your dough into a ball and place it in the center of the floured steel bowl. Lightly dust the top of your dough with flour and cover the bowl with a cloth towel and let rise in a warm place for about five hours.

At the five-hour mark when the dough has risen to capacity, gently rework the dough in the bowl back into a ball, dusting with flour as needed. Cover and let rise for at least two hours before cooking.

Step 3: Fry the dough
Using a wok or deep cast iron pan with enough oil to float the disks in, preheat the oil on a stovetop to 300 to 350 degrees. Divide the final dough into four to six equally sized portions, place them on a floured surface such as a large cutting board, and use a rolling pin to form them into thin, flat disks. Fry the dough disks individually, turning as needed with tongs, until golden brown and puffy. Remove from the oil and let drain on a wire rack, then lightly dust with optional powdered sugar or cinnamon sugar. Serve warm.

J. Nevadomski is the author of the long-running "Highlife for Lowlifes" series and is a food and culture contributor to CITY.  Feedback on this article can be directed to CITY's life editor, Rebecca Rafferty, at becca@rochester-citynews.com.