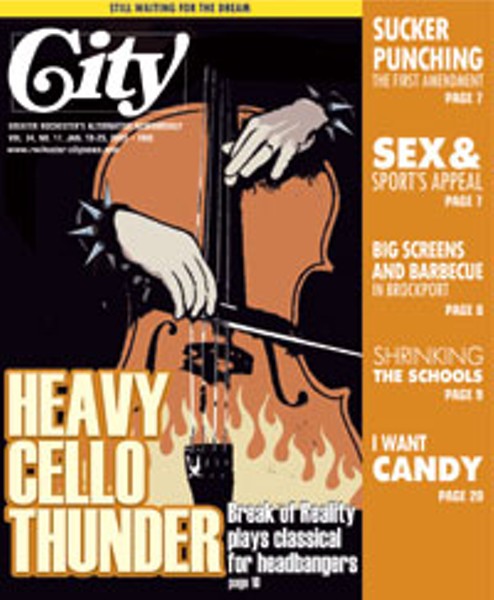 A rock fan sees a cello and is inclined to turn tail and run. A classical music buff hears "heavy metal" and cringes. Break of Reality cellist Erin Keesecker is keenly aware of both reactions.

"You have to erase any preconception you have of our music and then listen to us," Keesecker says. "People are like, 'Wow, it's not as weird as I'd thought it'd be.'"

Coffeehouse audiences aren't known for their exuberance. And coffeehouses aren't typically known as rock venues. At best, the dimly lit textbook folkie with a guitar earns a smattering of applause over the din of cappuccino steam and chatter.

Yet when cellists Keesecker, Patrick Laird, Jeff Hood, and Andrew Larson and drummer Ivan Trevino took to their instruments in front of a Spot Coffee crowd back in November, the place exploded. People were on their feet applauding and cheering. Each crescendo and highlight and solo was acknowledged with whistles and shouts.

When bowed low, the cellos emit a menacing moan that resonates deep in the spine. The upper registers are both demon shrill and angelic sweet. It's these ominous strains that Break of Reality's sound shares with heavy metal. The drums, though more standard in the idiom than, say, cellos, seem a little odd parked behind a seemingly classical lineup. But they add speed and drive to the strings' lush appeal.

Even when the group isn't covering a metal standard its sound is big and profound. Frankly, the tones BOR cranks out of its cellos frequently threaten to dwarf any ever heard in metal.

And the players' attack is equally maniacal. They lean into their instruments, sawing with a furious blur one moment, strumming power chords the next. Their demeanor is engaging and intense. And though they're five fresh-faced kids, they look and sound like they mean it.

Between sets at Spot, kids lined up to buy CDs and rap with the band. Sure, the fans were pounding coffee and mocha choca yada yadas as opposed to something in a long neck, but this had the feel of a rock joint --- brought to you by a string quartet with a drummer.

Eastman School of Music sophomore Patrick Laird modeled the group after Finnish metal band Apocalyptica, a trio that plays Metallica, Slayer, and Sepultura covers and metal originals on the cello.

"I always listened to classical because I was trained classically on the cello," he says. "But I was always into rock and metal."

So Laird scoured the Eastman talent pool. Keesecker, for one, was game.

"I just kind of decided to join on a whim because Patrick and I were buds in orchestra," she says. "I'd never played anything like that before. It was great. It's actually kind of challenging in a different sort of way than classical music. It's a challenge for me because it's not straight rhythm like you find in classical, you know, it's rock 'n' roll."

"The reason we play so many Metallica covers," says Laird, "is their lines are so melodic so it's really easy to transcribe and play. Some other bands where everything's wrapped around the singer or the vocals or there's a lot of screaming, that's not so easy to transcribe."

Break of Reality started without a drummer, playing its interpretation of Apocalyptica originals and Metallica covers.

Laird wanted to add drums and posed the question to percussionist Ivan Trevino. Trevino, who plays classically based tympani and marimba, didn't have a drum set, so he Frankensteined one out of parts and started rehearsing with the four cellists. And it worked.

With the introduction of drums, the rest of the group needed to amplify. This caused a stir; BOR was bounced from a Kilbourn Hall gig.

"They had another concert across the hall that we were too loud for," Laird says. "Originally they were just not too hot about it because it was amplified." But the group really can't see a way around it. The power of the drums and the subsequent volume is critical to the overall sound.

"Maybe if I played with brushes," Trevino suggests, "but it really takes away from the energy. It would suck to play a nasty rock beat soft."

They're amplifiedand they have an unorthodox approach, but the students still have faculty approval. Almost.

"I don't think my teacher knows yet," says Trevino. "He might freak out a little bit."

"Definitely our teachers are supportive of it just because it's performing and it's music and it's related to what we're going to be doing in the future," Keesecker says. "It's good experience, but at the same time it does take time away from our schedules. Life at Eastman is very demanding."

So Break of Reality is the members' own break from reality.

"It's the kind of performance that I can really enjoy and I can see immediate feedback from people," Keesecker says. "Because at school we play in an orchestra, we play in trios, we play in studio class. I feel it's always self-analytical and you're always thinking of what you did wrong. Whereas here you're just enjoying performing."

"It's nice to do something a little different like just jam out," Trevino says.

The band melds two diametrically opposed genres, but it becomes, at times, difficult to distinguish which one dominates --- both of them demand and emanate intensity.

Though more often than not it seems the audience doesn't bother with the distinction and just digs the sound.

"It's music that appeals to lots of different genres," says Laird. "Usually we find that half the people are into it, and never heard anything like it in their lives, and some of the people just don't really feel like they want to get away from the heavy metal instruments or the standard rock sound."

Other than the band's material and the fact that there's a rock drummer behind it, BOR is still just a string quartet. Virtually no effects are used in the sound. It's all in the approach.

"It's nice to have the natural tone of the cello," Laird says. "The only effects I use are delay and reverb. But nothing that would trade the quality of the tone."

"If we started messing around with it too much, we'd just be imitating guitars," Keesecker says.

"It's a lot more scratchy," says Laird. "It's a little more rough and dirty in rock than it is in classical. It's harder how you play rock music on a cello. It's a lot more painful."

Still, Laird can come off pure when he needs to, like in class. There he wouldn't dare break out a Break of Reality riff.

"My teacher would probably kick me out of the studio," he says.

But the kids, they love it. A large chunk of the fan base is made up of Eastman peers. At a recent Steel Music Hall performance, 70 kids were bussed over from campus.

"Oh, they love it," says Keesecker. "We're so lucky so many people from Eastman come out to all our shows, support us, buy our CDs."

Despite the hoopla and success, school comes first. Laird says the group will go "as far as we can take it without really hindering how we do in school."

"We don't have a singer or lyrics," says Hood. "I think that really helps because, I don't know, it doesn't give people any preconceived notions of any of our points of view. Basically we make music."