An Evening with Mike Birbiglia

Having performed on many famous stages before, including the Sydney Opera House and Carnegie Hall, Mike Birbiglia will bring his brand of honestly humble comedy and storytelling to Kodak Hall here in Rochester this year. He's the kind of famous face you might recognize, but don't really know. He's appeared in the Netflix series "Orange is the New Black," and such movies as "Trainwreck" with Amy Schumer and the critically-acclaimed "Don't Think Twice" with Keegan-Michael Key. He also turned a sleeping disorder into a New York Times bestselling book, an off-Broadway show and an award-winning independent film, called "Sleepwalk with Me." His acts are part stand-up, part storytelling with a purpose, so you don't just walk out of the theater laughing, but you might also walk away thinking about something differently.

Once again, the glittering Cristal Palace Spiegeltent will anchor the Spiegelgarden at the corner of Gibbs and Main as Fringe-Central-Station. The hub of the Fringe is home to performances as spectacular and eclectic as the massive mirror-filled colorful tent.

What better location for local drag superstars to lip sync, crack jokes, bring the camp, and full-on entertain? The first "Drag Brunch" at the Fringe will feature local queens Mrs. Kasha Davis, Darienne Lake, Keke Velasquez Lord, and Wednesday Westwood, while spectators get to sip mimosas and nibble on brunch from Edibles Restaurant. Both showings on Sunday, September 15, at 12:15 and 2:45 p.m. are already sold out.

Perfect for kids that need to burn off some energy, Disco Kids turns the popular Silent Disco into a pop music-fueled youth dance party that takes place Saturday, September 14 and Saturday, September 21 at 12:30 p.m. Tickets are $6 (kids 1 and under get in for free). And yes, there will be mimosas and coffee available for parents.

The adult Silent Disco is a sell-out every year, so if you haven't gotten your tickets yet (I've got mine), book 'em soon. Pop on your own headphones and pick from three different channels of live DJ'd music, and dance away. The 18-and-over party happens Fridays and Saturdays, September 13, 14, 20 and 21 at 11 p.m. Tickets start at $14.

And if you're into a bawdier, boozier version of the Bard, "Shotspeare" is right up your alley. The actors are taking on "Macbeth" this year, reciting classic Shakespeare in between guzzling beer, getting pummeled by socks, and having saltines shoved in their mouths. You have to be there. "Shotspeare" will be performed Tuesday, September 17 through Saturday, September 21 at 9:15 p.m. Tickets start at $21.

A Fringe staple that's back with a new iteration this year is Matt and Heidi Morgan's "Cirque du Fringe," performed daily in the Spiegeltent. In this year's world premiere show, "D'illusion," Matt will act as the master of ceremonies, illusionist Rod Raven, while Heidi will be his eccentric assistant. They'll blend magic with their signature humor that's sure to entertain audiences of all ages.

During the second and third weeks of September, the Spiegelgarden is the place to be when it comes to Fringe. The relaxed backyard barbecue vibe is accented by giant Jenga, chess, and checkers; a rotating line-up of food trucks, the Theatre Bar, and several outdoor shows. The Dashboard Dramas, which showcase short plays inside cars are sold out again this year, but there are still tickets left for many other of the Spiegelgarden's offerings.

The Bushwhacked duo, Abby DeVuyst and Kerry Young, are back with three new shows: Bushwhacked Backyard Bonfire (complete with jokes, s'mores & an open fire) and Bushwhacked British Bake Off (plus a Boozy version), modeled loosely off the hit show "The Great British Bake Off" (Many show times, visit rochesterfringe.com for details).

In between shows, stop by the Ask Us Anything Booth, which brings Siri to life, answering questions about everything from dating advice to directions (nightly at 6 or 7 p.m. throughout the festival). Or maybe you'd prefer some Complimentary Heckling (Friday, September 20 and Saturday September 21 at 5:45 p.m.)

Friday & Saturday on the Fringe

After dazzling audiences with their giant inflatables and bizarre imagery in 2017, the French street theatre troupe will return to Parcel 5 with the U.S. premiere of its new free show, "Pearl: Secrets of the Sea." On Friday, September 13 and Saturday, September 14 at 8 p.m., a giant sea serpent, an enormous octopus and a precious pearl with dance high above the crowd. Be sure to arrive early to get a spot on the bleachers or bring a lawn chair (only allowed in designated areas), look up and be amazed. The creatures will "swim" down East Avenue from Chestnut Street and end up at the parcel.

The massive live-karaoke concert that took over Parcel 5 last year is returning to the Rochester Fringe Festival with two new iterations: "Massaoke: Mixtape" and "A Night at the Musicals" (a North American premiere). On Friday, September 20 at 8:30, grab your buddies and belt your hearts out to pop and rock anthems, accompanied by a live band and lyrics on screen. And on Saturday, hairbrush singers will get to tackle Broadway hits and songs from movie musicals like "Grease," "Evita" and "Mamma Mia." Be sure to arrive early for this free event to get a good view of the Chestnut Street stage (between Main & East). 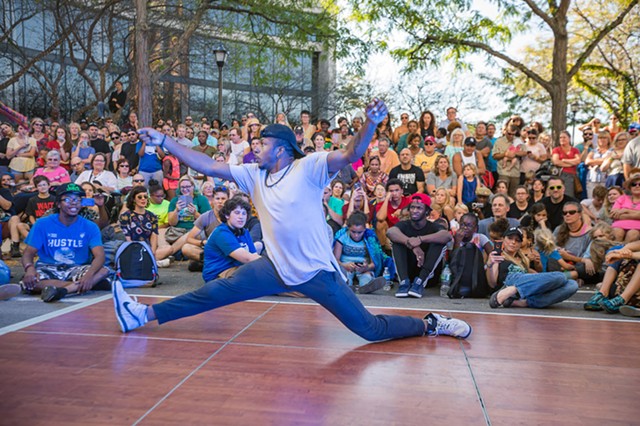 Now in its fourth year, local dance crews will once again take to the streets to battle it out in the popular Fringe Street Beat competition. Teams of two will show off all styles of dance to compete for the title of Fringe Street Beat Champions and a cash prize of $1,500. The preliminary round takes place on Saturday, September 21, from 1-3:30 p.m. and the finals go down from 4-5:30 p.m. on Chestnut Street (between East Avenue and Main Street). It's a free event, so get there early to get a front-row view. 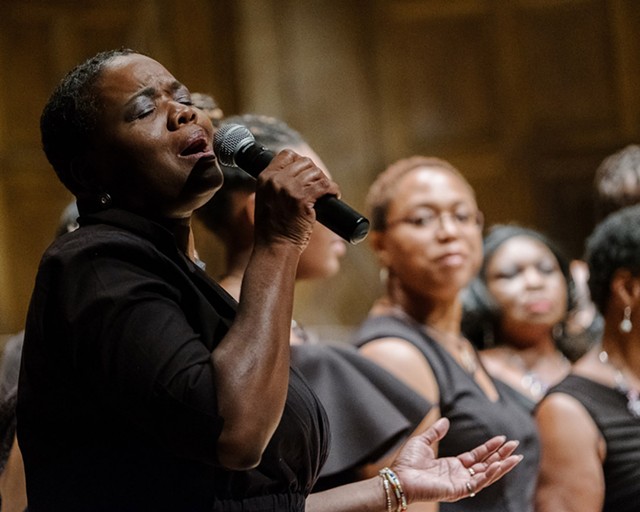 Some of the best gospel singers and performers in Rochester will be back this year for Gospel Sunday at Fringe, led by Reverend Rickey Harvey of Mt. Olivet Baptist Church. The renowned all-female choir AKOMA, as well as Pastor Harvey's group The Dynamic Dixie Wonders, will lift their voices and your spirits. This is the seventh year for the free event, which is typically standing-room only, so arrive early at Kilbourn Hall on Sunday, September 15. Doors open at 1:30 p.m., before the show at 2 p.m.

Storytelling is a key theme at this year's Fringe, and that's evident with the addition of "The Memory Palace," available as a live on-site walking and listening experience at High Falls, and on stage at the Eastman School of Music — Kilbourn Hall (Thursday, September 19 and Saturday, September 21 at 7:30 p.m.) The walking tour, which expands Fringe's footprint to Rochester's High Falls, allows participants to listen to the award-winning podcast as creator Nate DiMeo tells a specially-commissioned story about the lore of that area. The walking tours are free and will be take place on the hour and half hour every day (hours vary). Tickets for the live show start at $28. It is appropriate for ages 13 and up.