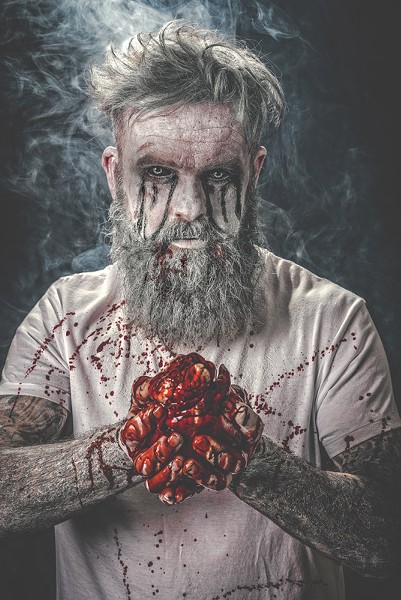 For the final days leading up to Halloween, we'll be reviewing and rating a couple of the area's most creative haunted houses.

If a zombie apocalypse hit Rochester, where would you go? I'd head for the biggest fortified structure. That's the premise of the haunted house at the Main Street Armory, the basement of which has been converted into a hub for the Center for Disease Control, and fully stocked with barrels and boxes labeled food, guns, and other supplies. Perfect place to wait it out, right?

Upon entering the safe haven, people are surrounded by screens broadcasting the panic ruling the streets of Rochester. The organizers ease the boredom of being in line by building suspense. Each group is briefed by a doc in a short CDC video about the efforts to combat the Human Zombie Virus (HZV) with a vaccine, which is administered to all who enter the "castle." Said medical professional also casually mentions the rather serious side effects which may result from taking the medicine, including hallucinations and madness.

Compound this spooky storyline with the fact that the Armory is already said to be haunted -- it's been repeatedly investigated by paranormal enthusiasts and was featured on Syfy channel's "Ghost Hunters" -- and you've got one heck of a build-up.

Duration: 4/4 stars. Just when you think it's finally over, it isn't.

Scariness: 4/4 stars. Even though this one is zombie and institution themed, other freaky elements like scary clowns make an appearance.

Jump-scares: 4/4 stars. Tons of twists and turns and blind spots, and it's not always easy to differentiate between prop dolls and actors.

Creativity: 4/4 stars. If you pay attention through the strobe likes and dimness, the place is loaded with clever details found in props and painted on the walls.

Admission is $20 to receive your anti-virus treatment. Tickets may be purchased at http://tinyurl.com/pr45o7d, at all Wegmans locations, Aaron's Alley, and The House of Guitars.