For the majority of film history, stories about Indigenous people have been presented by non-Indigenous writers, directors, and too often, actors as well. This fact has done a lot of damage in terms of how Indigenous people are seen, and the often subtle apologist tones with which American history is portrayed.

That’s begun to slowly change. And this month, Rochester’s newest film festival will serve not only as a showcase of regional Indigenous films, but an initiative to promote filmmaking specifically among Haudenosaunee peoples.

“There is a powerful difference between telling our own stories or having someone tell them for us, says Michelle Schenandoah (Oneida), founder of Rematriation Magazine, a publication devoted to creating space for and uplifting Indigenous women’s voices. She’s also one of the founders of the Haundenosaunee Filmmakers Festival, which premieres virtually throughout the week of April 19-25.

The festival, which is co-hosted by Friends of Ganondagan and Rematriation Magazine, is also intended to coalesce as a network of Haudenosaunee film writers, directors, producers, and actors. It seeks to connect Haudenosaunee filmmakers with resources and opportunities to screen their films, to connect Indigenous filmmakers and industry leaders, and foster collaborations across the Haudenosaunee Confederacy. 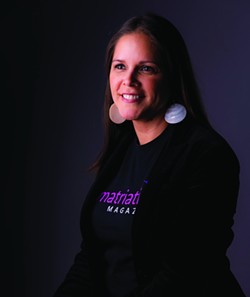 Toward that end, the event includes screenings and educational panel discussions, but also a filmmaking workshop exclusively for Haudenosaunee women.

A call for films in early February yielded dozens of submissions, out of which 26 were accepted into the festival. A handful of feature-length films will be presented, as well as a number of short films. The films will be first available to stream on different days of the week corresponding to different categories of films that will be presented, and after they’ve debuted, they’ll continue to be available for streaming through May 1.

Classics (more than two years old) will debut on Monday, April 19. The category includes the touching 2016 short documentary, “Soup For My Brother,” by Seneca director Terry J. Jones. Filmed entirely on Seneca Nation territory, the story’s protagonist, Jimmy, lovingly prepares a soup for his deceased brother, guided by memory and the words of his grandfather.

Contemporary films (less than two years old), will debut Wednesday, April 21. This group includes “VeRONAka,” a short comedic drama by director-writer Kahstoserakwathe Paulette Moore (Mohawk), in which the title character is a personified COVID-19 who terrorizes the community before her run-in with a group of powerful Mohawk aunties.

This set also includes one of the feature films, “Haudenosaunee Canoe Story,” by director Roxann Whitebean (Mohawk). The documentary film follows a father, Hickory, and his 5-year-old daughter Ellie as they undertake a voyage through waterways and the history of their people.

On Friday, April 23, films by Haudenosaunee women will be featured, including “Without A Whisper” by Katsitsionni Fox (Mohawk). The award-winning short documentary tells the story of how Indigenous women influenced the early suffragists, and features Mohawk Clan Mother Louise Herne and suffrage movement historian Sally Roesch Wagner joining forces to tell the hidden history. The film was meant to premiere at Ganondagan in 2020, but the pandemic prevented that.

The final category, presented on Sunday, April 25, is Traditional Language, featuring films that prominently feature the Haudenosaunee family of languages, with accessibility considerations for non-speakers. This category replaced the planned Youth category, Schenandoah says, because the festival organizers didn’t receive as many entries from young filmmakers as they’d hoped. They did, however, get a lot of Indigenous-language submissions.

Within this category is a short documentary film about Marion Delaronde (Mohawk), who is preserving and helping to perpetuate the Mohawk language through the use of puppetry on her Montreal-based children’s show, “Tóta tánon Ohkwá:ri” ("Grandma and Ohkwá:ri").

That film is also part of a presentation of five short films from the Rematriation Magazine Indigenous Women Series that will be streamable throughout the week. The series shares the stories of Haudenosaunee women artists and leaders and the films have a common thread of dismantling social injustice, but through a spiritually-grounded lens, Shenandoah says. She adds that the series centers the voices of Indigenous women who hold traditional knowledge about living in balance with the earth, democracy, and justice.

The other subjects of this set of films are Grammy Award-winning musician Joanne Shenandoah (Oneida); Santee Smith (Mohawk), who is an artist, dancer, and choreographer, and who was the first Indigenous woman appointed Chancellor of McMaster University in Ontario, Canada; Carla Hemlock (Mohawk), an activist and textile artist who uses her designs to promote caring for the earth; and Angela Ferguson (Onondaga), who is focused on food sovereignty — a drive “for our nations to be able to feed ourselves with our own food,” Schenandoah says.

Films aside, four panel discussions will also be live-streamed, including Thursday’s, “Which Side of the Camera?” The program will feature Haudenosaunee filmmakers discussing their experiences making films about Haudenosaunee people.

The festival will also feature a week-long workshop, “Rematriating the Narrative,” that is open exclusively to Haudenosaunee women. It will focus on un-learning the Western-lens approaches of storytelling and filmmaking, and replacing those with methods of telling stories from an Indigenous point of view, Schenandoah says. As part of the workshop, participants will create one-minute film stories from their perspectives.

On Saturday, April 24, a panel also called “Rematriating the Narrative” will discuss and showcase the work of the women who participated in the workshop.

There’s limited space for the workshop, and interested Haudenosaunee women can register here.

Head to ganondagan.org for more information on the festival.