Harriet Tubman, and western New York, get their places in history

November 15, 2019
The Equal Rights Heritage Center has got Harriet Tubman right. There she is, standing on the lawn in downtown Auburn, holding a lantern. And just in case you choose to ignore that symbol of truth-seeker, there's also a gun tucked in the statue's belt. 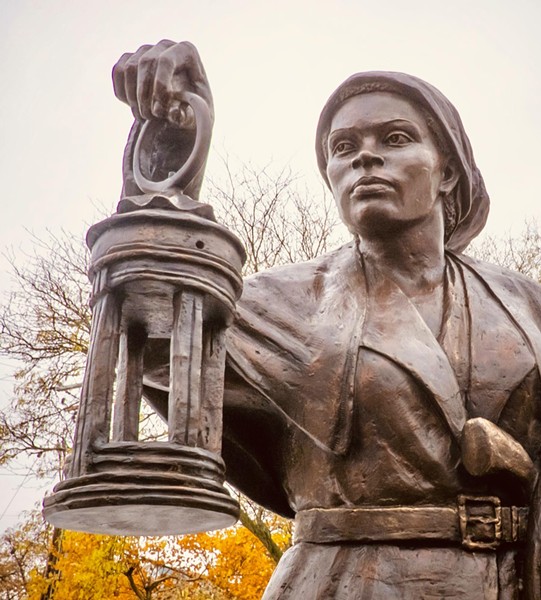 "Then you get to figures like Nat Turner, and others who are important for other reasons. But Harriet Tubman is right up there."

We'll see if "Harriet" elevates her further in the conversation. The new film biography of the abolitionist has already been playing at a few theaters in town and opens Friday at The Little Theatre as well. And while Auburn itself doesn't play a major role in the film — there is a brief mention, and most of the filming was done in Virginia at sites historically connected to slavery — the town contributes major characters to the story. That includes Tubman as well as the abolitionist U.S. Sen. William Seward. Both are driving forces in the movement to end slavery.

"He, from the corridors of power," says Jeff Ludwig, director of education at the Seward House Museum. "She, on the Underground Railroad, attacking the institution."

In "Harriet," Tubman is played by Cynthia Erivo, a Tony Award winner for her performance in the musical "The Color Purple." She's joined by Leslie Odom Jr., best known for his role in the Broadway production of "Hamilton," and R&B star Janelle Monáe. This cast would seem to scream "MUSICAL!"

FILM | 'Harriet'
By Rebecca Rafferty
Choice Events
But "Harriet" will have none of that, settling for a score by the jazz musician Terence Blanchard. Tubman was born into slavery, and the film reminds us that these people are, by any clear-minded definition, kidnap victims. Tubman escapes, fleeing 100 miles on foot to Philadelphia. There, seeing black people prospering as free people, the energetic woman becomes a leader in the Underground Railroad movement. She's sometimes called "Moses" because of the many escaped slaves she helped lead to safety. She also served as a scout and a spy for the Union Army.

And yes, that's no Hollywood exaggeration. "She was technically a fugitive slave," Ludwig says. And yet, "She was on active duty, leading armed raids."

Tubman, who had been living in Ontario, Canada, moved to Auburn in 1859, just before the start of the Civil War. She settled her parents there on a small parcel of land sold to her by Seward. Tubman continued to develop that property throughout her life. She died in Auburn in 1913 — probably in her early 90s, her exact birthdate is unclear — and is buried there.

Rochester's closer connection to the story is through Douglass and the women's-rights activist Susan B. Anthony; the three knew each other. "They were on the same speaker circuit, they knew the movers and shakers," Ludwig says.

"We're excited to see her get her due place in history."

President Abraham Lincoln may have been "The Great Emancipator," May says, but, "In many ways, African-Americans forced the issue, by running away, by resisting, by slowdowns at work. In all sorts of different ways, they got the message out that they were unhappy, and they forced white politicians to confront the situation."

Jeff Spevak is WXXI's Arts & Life editor. He can be reached at jspevak@wxxi.org.