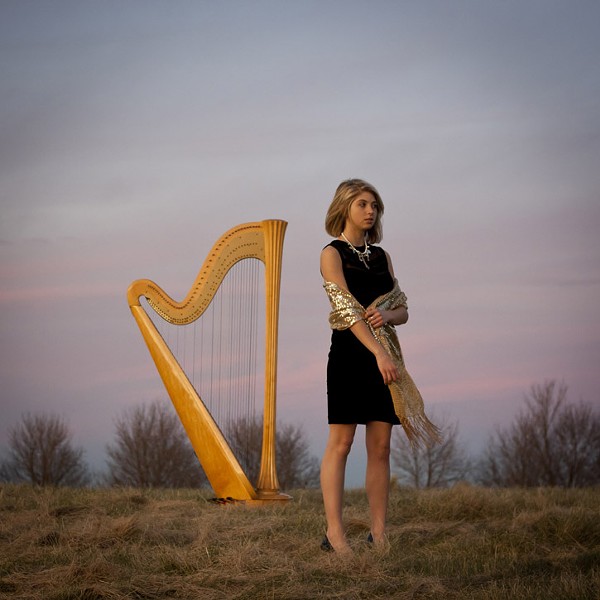 If heaven has an orchestra of harp-strumming angels, someone should probably take a head count. Twenty-year-old Mikaela Davis began playing the harp in third grade. Since then she has studied with Grace Wong, the principal harpist of the Rochester Philharmonic Orchestra, and she now attends the Crane School of Music at SUNY Potsdam. She has used that musical pedigree to conjure a sound that picks the indie-folk genre up from its roots and lets it loose into an ethereal jet stream.

In addition to her studies and regular live performances, Davis has just put the finishing touches on her debut self-titled album with the help of Brian Moore at Redbooth Studios in Rochester. Moore says of Davis, "It is artists such as [Mikaela] that inspired me to open Redbooth. Not only does she have a beautiful voice, but she plays harp without skipping a beat. She makes the intricate balance of fluttering vocal folds and fingers on strings appear effortless...Simply magical."

City recently had a chat with Davis to discuss her burgeoning musical career, as well as video games and vegetables. An edited transcript of the conversation follows.

CITY: What inspired you to take up the harp?

Mikaela Davis: They actually offered harp lessons at my grammar school in Penfield, and from the first time I heard a note, I knew that it was the instrument for me. Also, I was extremely close with my grandmother, who had recently passed, and I could picture myself playing under the skylight in my living room, and her watching me practice.

What are some of your musical influences?

My taste in music has definitely evolved as I've grown up. When I was in grammar school I listened to the Dixie Chicks and Britney Spears. In middle school I really got into Vanessa Carlton — you know, like, cheesy piano pop music. But it was also around that time that I started to write my own material. When I was in sixth grade, my dad moved to California and I wrote a song about how it made me feel. I think that's when I learned that songwriting could be such a rewarding and therapeutic experience. I had an art teacher tell me once that some of my songs sounded like Fiona Apple, so I started listening to a lot of her stuff, as well as bands like The Beatles and The Kinks. I love Dinosaur Jr. and Beach House. But I would have to say my biggest influences are Sufjan Stevens and Elliott Smith.

How has the Crane School helped you grow as a songwriter?

I took a little musical theory in high school, but it was only when I started at Crane that I began to understand how to utilize it as a way to approach the construction of songs. It geared me toward starting with the chord progression, and then laying the melody over that. But I am really self-conscious about my lyrics.

Joanna Newsom's lyrics are amazing. Or someone like Josh Netsky, who I'm actually going on a short tour with in July; his lyrics are like beautiful poems.

Where will that tour take you?

We will be in Buffalo, Rochester, Syracuse, Albany, Providence, Boston, and New York City. And then right after that trip we'll be playing Boulder Fest [at Boulder Coffee Co. in the South Wedge, July 20-22). I'm really excited about that.

I've seen you play solo a couple of times, but your upcoming show is with your band. How is the chemistry?

It's great. Alex Coté, who plays drums and adds some back-up vocals, has been my friend since childhood. Our new member, Cian McCarthy, who plays keyboard and guitar, has fit right in. Both are in the jazz performance program at SUNY Purchase, Alex for drums and Cian for saxophone. Having the guys behind me gives me a sense of security and I love the extra sounds. It is truly a collaborative enterprise.

You have your album coming out soon. What was the recording experience like?

Absolutely fantastic. Brian Moore, the recording engineer at Redbooth Studios, made us feel right at home. I was really nervous about it at first, but the whole experience was so comfortable, very relaxed. We didn't feel any pressure and we just trusted his judgment. I am so happy with the way it turned out. The release party will be at Lovin' Cup on July 31. Stoney Lonesome and Josh Netsky will help us celebrate.

What would you say is the weirdest thing about you?

When I was a younger, kids used to make fun of me because I absolutely love artichokes or Brussels sprouts; you know, anything that kids usually hate to eat. Also, I posted a video of me playing "Great Fairy Fountain" - theme music from "The Legend of Zelda" - on YouTube and have received a ridiculous amount of positive feedback.

What are your future plans?