It was after a gig in 1980 when drummer Billy Mintz made an off-handed suggestion to pianist Harold Danko: “What if you played an annual concert, but you did it every February 29?”

Forty-one years later, Danko will be playing his 11th “Quadrennial” Leap Year Event on Saturday. The concerts began at legendary New York City clubs like Birdland and the Five Spot Café, and they’ve continued at various Rochester venues since Danko moved here in 1998 to teach at the Eastman School of Music.

This year’s show has an added dimension; it will take place in the atrium of The Piano Works. 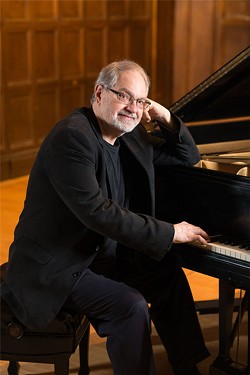 Danko and his wife, classical pianist Fei-Yan Wang, recently moved to East Rochester, a town steeped in piano history. The Piano Works is now an East Rochester shopping plaza, but a century ago it was known as the “General Motors of the piano industry.” Grand pianos, uprights, even player pianos — with top brand names like Chickering, Aeolian and Knabe — were all made at The Piano Works. At its peak, the factory’s craftsmen turned out 700 pianos per week.

“The whole history is astounding,” says Danko, who will play a hand-made Shigeru Kawai grand supplied by Denton, Collier & Daniels Pianos, a store in the plaza.

During the concert, Danko will not only play his compositions; he’ll reminisce about his extensive career. “If you want to talk about Chet Baker, I’ll stay ’till midnight,” Danko says. There will also be an exhibit by East Rochester artist Mark McDermott and presentations by the Rochester Music Hall of Fame, not to mention a chance to see the piano-aquarium featured on the TV channel Animal Planet.

Danko spent 19 years as a professor in the Jazz Studies and Contemporary Media Department at Eastman School of Music. He’s now retired and a professor emeritus. But earlier in his career, he was on the road with Baker, Gerry Mulligan, Woody Herman, and Lee Konitz. For four years he occupied the piano chair with the Thad Jones/Mel Lewis Jazz Orchestra.

Sometimes these jazz legends would record a Danko composition, including his most popular, “Tidal Breeze.” Danko wrote this evocative tune away from the piano in 1967, when the Ohio native was inspired by his first glimpse of the Atlantic Ocean. He also wrote Baker’s irresistible two-horn arrangement of the song.

“The first Chet Baker record I got on, where he played ‘Tidal Breeze,’ was actually after I’d left Chet,” Danko says. Ironically, Baker had asked Lewis’s advice on what pianist to use on the session and Danko was the recommendation.

His first stint with Baker was in the mid-1970s, after the trumpeter-vocalist discovered him at the Half Note. A decade later Danko went to another club, the Whippoorwill, to see his old boss.

“Chet welcomed me with ‘Hey, do you want to play?’” Danko says. “‘We’re going to go to Holland in a couple of weeks to make some recordings. Do you want to come?’ We did those dates and came back and he says, ‘We’re going to Japan in the spring; I’ll give you a call.’ And that led to ‘Chet Baker in Tokyo,’ the recordings people remember him for because he was in great shape.”

Danko’s career began in the early 1970s in the Unites States Army Band. Stationed on Staten Island, he could easily check out the New York City jazz scene. But he couldn’t quite join it.

“I couldn’t take a gig because I might have to play the general’s reception Saturday night,” Danko says. Still, he met musicians like upstate New York drummer Joe LaBarbera, and secretly played in an anti-war band, behind Jane Fonda and Donald Sutherland, at the Ethical Cultural Society.

But when his Army stint was over, he didn’t really have a plan.

“I was married and I said to my father-in-law, ‘We’re going to go on food stamps and I’ll get six months of unemployment,’” he says. “That’s not what a father-in-law wants to hear.” Instead, Danko got a call from Woody Herman’s band. LaBarbera had recommended him.

Once Danko was in with the in-crowd, one gig led to another.

“Lee Konitz took me up to Mulligan’s place in Darien, Connecticut,” Danko says. “The three of us played a bit and after that Gerry started calling me. At the time I thought he was over-the-top on his own music. I appreciate him more now.”

And there was his time with the Thad Jones/Mel Lewis Orchestra, from 1975 to 1978. “That was the most amazing,” Danko says. “The vibe of that band spoiled me for just about anything else. I felt like I was really part of something.”

Since retiring from Eastman, Danko has been on a tear creatively. He’s played concerts in several US cities, Canada, Taiwan and South America. His new album, a duo with free-jazz cornetist Kurt Knuffke, is farther out than Danko usually goes. The owner of SteepleChase Records, Nils Winther, thought it would be fascinating to bring together the two contrasting musicians, who had never met before the session. The album, alternating straight-ahead Duke Jordan tunes with free-jazz improvisations, proves him right.

Two additional new releases feature Danko: “The Music of Thad Jones” (with bassist Simone Monnanni on Zanetti Records) and “Old Prose” by the Richard Whiteman Quartet. The latter showcases Danko on piano and as a composer.

As a leader, Danko has been with SteepleChase for an almost unheard-of three decades. Next year, the label will release his interpretation of parts of a favorite piece by Igor Stravinsky. “I’ve been obsessed with ‘The Rite of Spring,’” Danko says. He’ll be previewing some of his impressions of Stravinsky and playing favorites like “Tidal Breeze” at The Piano Works.