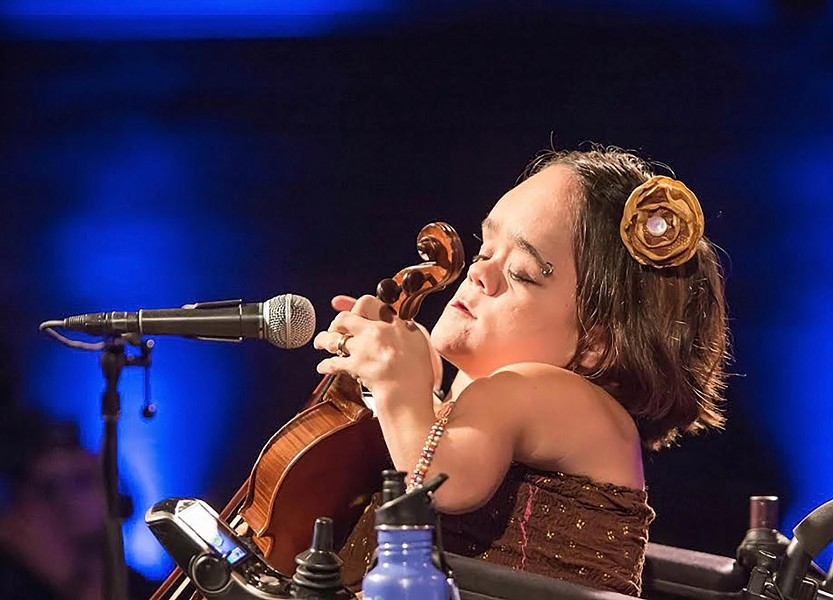 Before she was born, Gaelynn Lea had experienced more than 40 bone beaks in utero. This Duluth, Minnesota, musician has a congenital disability called Osteogenesis Imperfecta, or Brittle Bones Disease. Her arms and legs are shortened and she uses an electric wheelchair to get around. Lea had never considered pursuing music during her childhood until she heard the violin.

A supportive teacher and a set of encouraging parents shouldered the challenge with her. She created an approach that she could handle, playing the violin like a cello. This is the ingenuity you see first. What you hear first is her voice. With its light vibrato and gentle phrasing, all harmonized and built up with a looping pedal, it'll stop you dead in your tracks.

In 2016, Lea beat out 6,100 other musicians to win NPR's second annual "Tiny Desk Contest" which added to her prominence. She travels the country with her husband, playing solo and as a member of the duo Murder of Crows, a minimalistic yet deeply ethereal outfit that puts together dreams of flight. When she's not playing, Lea serves as an advocate for people with disabilities.

CITY gave this exceedingly charming and chipper lady a call to discuss it all. An edited transcript follows.

CITY: Musically, what first inspired you?

Gaelynn Lea: In the very beginning, it was the sound of the violin. I really love harmonies, and when I started performing in 2006, I would think of my violin as a second voice and used it as a harmony. Harmonies like Simon & Garfunkel, The Decemberists, Neutral Milk Hotel inspired me.

I started playing violin when I was 10 years old. An orchestra came to my school and I really liked the sound of it, so I figured the next year I would try out for orchestra. And lucky for me the teacher who was in charge of the program didn't try to dissuade me. I play very differently because I'm very small because of my disability. Instead of her saying, "This won't work, you should try choir," she said, "I don't know for sure if it'll work, let's try it out and see." And teachers throughout high school worked with me as I progressed. And I've been playing ever since, and I started performing 10 years ago.

When did you begin incorporating the looping pedal into your approach?

In 2011, I began playing with Alan Sparhawk from the band Low. He kind of introduced me to the looping pedal. He would control the pedal and I would play harmonies to what I was hearing. Then one day, he came over and gave me a pedal and said, "I think you should learn how to use it, then someday you can play shows by yourself," which seemed like a ridiculous idea at the time. But he was right, and it became a big part of my music later on.

How important is improvisation to your overall sound?

I've always been somewhat of an improv performer. In school, I was classical. But in college, I started getting into improv. You feel your flow, and I like that. The looping pedal is good for that.

How do you keep the improv from getting out of hand?

That's a good question. I think you have to remember that space in music is as important as sound. When I first started playing, I'd play a lot more notes. Low is known for being very sparse. I'm not like that, but I do remember that you have to build it up gradually or it gets too cluttered.

What comes first: the melody or the lyrics?

Actually they come at the same time ... at least some of the lyrics. I hear the first line of any song I write with the melody attached. But then I have to finish the lyric in the structure of the melody. I think only once or twice I ever heard the entire lyric all at once.

Your disability notwithstanding, what do you struggle with?

Musically rhythm is my weakest link. And with a looping pedal you have to be precise. I'm working on it. It's still not my strong suit.

What comes easy to you?

What comes easy to me is harmony. I'm recording a new album and sat down and did all the harmonies and my bandmates said, "That's not normal, how do you hear those?" I just do.