‘An Evening in Granada’

[ THIS CONCERT, SCHEDULED FOR MARCH 21, HAS BEEN CANCELED ] Classical guitarist Jason Vieaux’s career reflects the versatility (and the portability) of his instrument. He’s apt to show up anywhere, from a symphony orchestra concert to NPR’s “Tiny Desk” concert series, from teaching at the venerated Curtis Institute of Music to giving online lessons.

The award-winning Vieaux performs throughout the world, but Rochester played an important part in his early studies. He returns to give a solo recital, “An Evening in Granada,” at the Hochstein Performance Hall on March 21.

He’s been at the top of his profession since 1992, when he won first prize in the GFA International Guitar Competition two years after graduating from high school. He’s also won a Naumburg Foundation chamber music award, was a US Artistic Ambassador to Southeast Asia, and won a 2015 Grammy for his solo album “Play.” 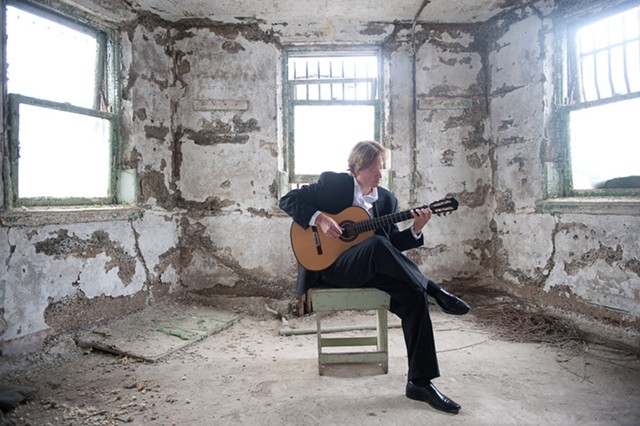 Having originally studying in his native Buffalo with Jeremy Sparks of the Buffalo Guitar Quartet, Vieaux describes himself as a “a serious kid.”

“All through high school, I was in my basement studio, practicing my exercises and etudes,” he says. His heroes were, and still are, such pioneering old-school classical guitarists as Julian Bream, Andrés Segovia, David Russell, and John Williams.

The talented teenager was initially invited to visit Rochester by John Wiesenthal, who taught guitar (and still does) at the Hochstein School of Music. Wiesenthal also recently founded the Guitar Society of Rochester. “There wasn’t much of a classical guitar scene in Buffalo,” Vieaux recalls. “But John Wiesenthal was a strong, devoted, and enthusiastic leader in Rochester. My first time seeing players like David Russell, Sharon Isbin, and Carlos Barbosa-Lima in recital was at Hochstein.” He visited Rochester several times each year to attend recitals and master classes, and as a high school senior had what he calls “my first real gig,” as one of four guitarists taking part in a Guitar Society recital.

Vieaux’s talent and dedication were obvious, but few conservatories offered degrees in guitar performance. Vieaux chose the Cleveland Institute of Music, where he studied with John Holmquist. In 1997, Vieaux joined the faculty himself. He’s still there, now as head of the guitar department.

“The 1980s and early 1990s were really another era,” he says. “Oberlin, Eastman, Juilliard, Peabody — none of them had guitar programs. In the '90s it really started to happen, and now they all offer them.” Eastman School of Music started its guitar program in 1993 under Nicholas Goluses, who still directs it.

One holdout was Philadelphia’s Curtis Institute of Music. It didn’t start its guitar program until 2011, directed by Vieaux, who is still on the Curtis faculty. The following year, he started the Jason Vieaux School of Classical Guitar with ArtistWorks Inc., giving students the chance for one-on-one online study.

Vieaux’s teaching career, he remembers, started long before he went to Cleveland. “I gave lessons in middle school and high school,” he says, “starting with a friend who wanted to learn Ozzy Osbourne’s ‘Killer of Giants.’ He was amazed that I could listen to a record and then play the music back.” More high school rock guitarists came forward to learn from Vieaux, who says he learned how to teach from the experience, and made some money in the process. 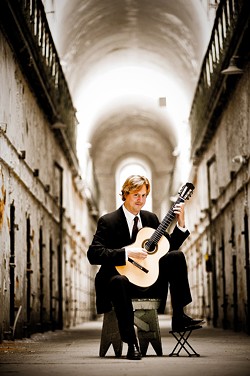 The classical guitar has an enormous repertoire, and Vieaux’s concerts and recitals span the centuries, from the medieval era to the present day. He’s also explored what he calls his “jazz leanings,” and his chamber music experience ranges from a 13-year collaboration with the Escher String Quartet to an album with the accordionist and bandoneón player Julien Labro.

Asked about his varied career, Vieaux says simply: “I’ve never made a lot of plans. I have been very fortunate in being approached by a lot of great musicians.”

Like most classical guitarists, Vieaux is an avid proponent of contemporary music. “My interest in modern, more dissonant music — music with no tonal center — goes back to the first contemporary piece I learned when I was 13, Hans Werner Henze’s ‘Drei Tentos.’ I was immediately interested in learning it, and also pieces like Britten’s ‘Nocturnal After John Dowland’ and Takemitsu’s ‘Equinox.'” These are all now classics of the guitar repertoire.

“I explored this music early enough to be able to listen to it again and again, and learn to enjoy it,” Vieaux says. But even given his pleasure in contemporary music, he finds the music of Bach to be the most rewarding. “It is absolutely the highest quality music we have for guitar,” he says.

Does Vieaux perform older music like that of Bach on period-specific guitars? “I’m very much a modern player, and not a specialist,” Vieaux says. “It’s expensive and cumbersome to travel with multiple instruments. And a modern instrument is what you need to project into a large hall.”

The March 21 concert at Hochstein, “An Evening in Granada,” is an all-Spanish program, though it will show the breadth of Jason Vieaux’s repertoire. He describes the program as “moving through history, though not chronologically,” from Manuel de Falla’s “Homage to Debussy” to a 1526 fantasia by Alonso Mudarra. Additional Spanish atmosphere will be provided by projections and other multimedia aids.

David Raymond is a freelancer for CITY. Feedback on this article can be directed to dkushner@rochester-citynews.com.