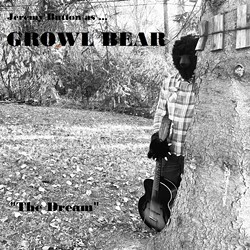 The name Growl Bear might conjure up images of a moody pop-electronica duo rather than an Americana band, and it may be tempting to think of “The Dream” as a loosely crafted concept album.

But “The Dream” is really a series of acoustic-based, folksy vignettes. Its story-songs drift between Button’s ancestors’ connection to the Civil War, his past and present, and eventually to an ominous future. The connective tissue is a fixation on nostalgia and death before embracing the power of living and loving in the moment.

Button sings with an easy-going, conversational cadence and an ear for the next timely vocal harmony. On the title track, Button tells the story of his recurring morbid dreams accompanied by music that cleverly shifts the mood from uncomfortable and macabre to a life-affirming, barroom sing-along, complete with lilting piano chords.


Another track, “Simple Life,” rejects the distractions of modern life in favor of embracing the joy that comes from being fully present. The uptempo, alt-country accompaniment emphasizes a locomotive combination of drumbeat and harmonica. As with the majority of the songs on “The Dream,” vocal harmonies seem ever-present.


At times, the harmonies come off as excessive and unimaginative. A more economical use of harmony could have made for engaging storytelling. As a whole, the vocals could have held their pitches more effectively. The resulting shakiness detracted from the simple poignancy of the melodies.

Aaron Lipp produced, engineered, mixed, and mastered the album at Temple Cabin Studios, lending a subtle consistency of tone that provided cohesion between an otherwise disparate set of songs.

Growl Bear’s “The Dream” is not the kind of album you can listen to on shuffle, nor can it be fully experienced by hearing individual songs on their own. “The Dream” is a complete abstract story in which the whole is greater than the sum of its parts. Button’s big-picture approach to songwriting takes a complex thematic vision and distills it into straightforward folk ballads and peppy country ditties.