PHOTO BY RENÉE HEININGER
The debate over what to do with a gravel-covered lot at the center of Midtown embodies much of Rochester’s development arguments in recent years.

Nearly everyone knows about – and has thoughts about – the conflict over Parcel 5. The city, which owns the property; the Rochester Broadway Theatre League; and developer Morgan Management are advancing plans for a 3,000-seat theater along Main Street with an adjoining 150-unit apartment complex. But a web of people and groups want the site turned into a public space: not just a park, but a spot for performances and events.

They point to the buildings on all sides of the lot and the new high-end apartments in them and they ask a direct question: who is all this development for? Too often, they say, it benefits developers and a select group of people at the expense of a neighborhood or community.

Sunday, during an Earth Day event at Parcel 5, members of more than 30 neighborhood, community, and activist organizations joined together and raised the same point, this time about development city-wide. They're part of a new coalition, Our Land Roc, which is urging the city to change its approach to development so that it’s more collaborative and gives the public a greater voice.

“There are many people who are not involved in the process” and who are often negatively impacted by development, Rachel Rosen Simpson, a member of Rochester Democratic Socialists of American and Rochester People’s Climate Coalition, said during the coalition's press conference at the event. 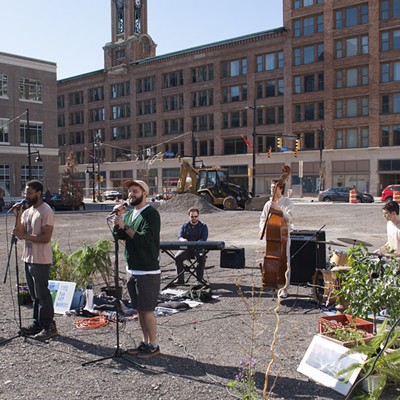 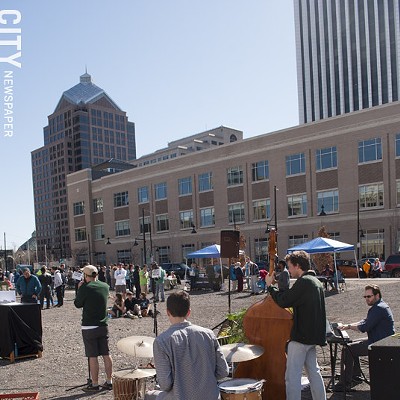 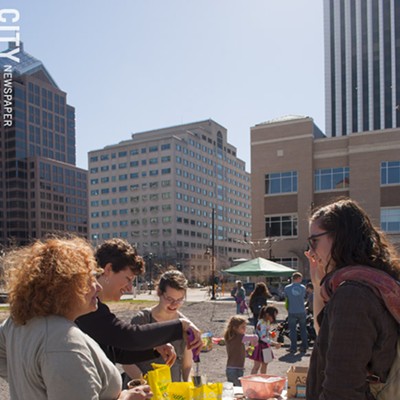 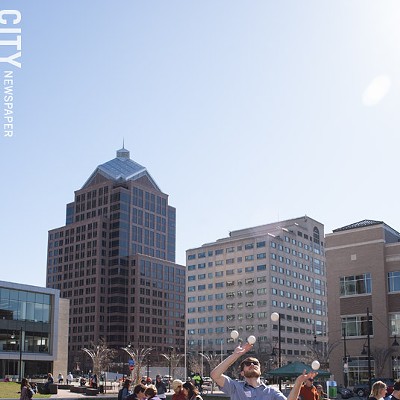 Our Land Roc Earth Day celebration
Click to View 7 slides
The coalition is also emphasizing the importance of ensuring that Rochester has an adequate supply of truly affordable housing, that new development doesn’t displace neighborhood residents, and that any new construction is environmentally sustainable.

Some members of the coalition are trying to stop a proposed six-building apartment complex that would replace Cobbs Hill Village, a low-income senior housing complex surrounded by Cobbs Hill Park; the developer notes that all of the new units will meet state guidelines for affordable senior housing. Others were involved in the fight against a proposed boutique hotel in Charlotte; the project has since been withdrawn. The Rochester People’s Climate Coalition wants the city to hold developers to aggressive energy efficiency requirements if a project receives incentives.

The PLEX Neighborhood Association, which is a coalition member, has been paying close attention to DHD Ventures’ plans for redeveloping the former Vacuum Oil property. The brownfield has been a burden on the PLEX community for a long time, and the association wants to ensure that any new development benefits residents and doesn’t displace them.

PLEX leaders are pushing for DHD and the City of Rochester, which owns property adjacent to the Vacuum Oil site, to perform the most aggressive cleanup possible. They’re also pushing for the project to include businesses that would serve existing residents, such as grocery and hardware stores.

And they’re trying to get the city to provide funding for at least the first phase of the proposed PLEX Park; the project was designed in three phases and carries a $1.6 million price tag.

The city and developers should be listening to these kinds of neighborhood-level concerns, wants, and needs, and addressing them, said PLEX Neighborhood Association Vice President Dorian Hall during the press conference. Our Land Roc hopes to use grassroots organizing to build pressure on the city to change its practices.

“This is where it all starts,” Hall said during the press conference.

Our Land Roc also presented a list of five demands it has for the city around land-use policies and practices.

Its members want the city to implement inclusionary zoning policies, which require developers to include a certain percentage of affordable units in each housing project. The city already does this when developers receive certain incentives, but some housing activists say the units aren’t truly affordable. Our Land Roc wants the city to change its affordable-housing formulas so they’re based on city median incomes and not county figures, which is what it currently uses.

The coalition is also calling for participatory budgeting, where residents have more input into how city discretionary funds are spent. They want the city to notify residents about project proposals at the neighborhood level, instead of basing the notifications on distance from the project, and to provide “ample time for residents to comment and provide meaningful input.”

Our Land Roc wants to see the city start using community benefits agreements. Those are contracts between developers, the city, and the neighborhood a project is in that are intended to ensure a neighborhood’s needs are acknowledged and addressed.

And the coalition wants the city to embrace community land trusts, which are a mechanism to protect and provide affordable housing.

“We’re putting the question of affordability directly into the hands of the community,” says Joe Di Fiore, president of City Roots Community Land Trust’s board. “We control the property ourselves. We can dictate what is affordable as determined by the community. That’s a really powerful tool. Then there’s no one else to blame.”

This article has been updated to clarify details of the Cobbs Hill Village redevelopment proposal.