A coalition of tenants groups and advocates from across New York continues its campaign for new laws to protect renters from displacement due to arbitrary evictions or sudden rent increases.

Representatives of the Upstate-Downstate Alliance travelled to Albany last week to show support for the laws, and they delivered letters to the offices of Governor Andrew Cuomo, Senate Majority Leader Andrew Stewart-Cousins, and Assembly Speaker Carl Heastie. The Rochester City-Wide Tenant Union, which formed in response to deteriorating conditions at several low-income apartment complexes in the city, is a member of the Alliance. 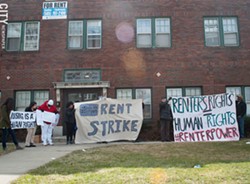 The letter also supports a just-cause eviction proposal from Assemblymember Pamela Hunter and Senator Julia Salazar. The legislation would allow landlords to evict tenants for certain reasons, including failing to pay rent, being a nuisance, conducting illegal activity on the property, or violating the lease terms. But it would prohibit landlords from forcing out tenants without leases, or denying lease renewals, unless the renters committed one of the specified infractions.

The legislation would apply to apartment buildings and mobile home parks.

"These are common sense solutions to a crisis that is costing our state dearly," the letter says. "We need your support of this legislation, and we need it this year. Waiting would cost too many people their homes, and that is unacceptable."