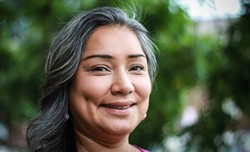 A group of nine Democrats, led by Legislator Yversha Roman, convened at 8 a.m. Thursday to make the appointment. The meeting was swift with no debate, other than a brief remark from Legislator John Baynes following the vote.

“The motion is adopted and we congratulate Jackie Ortiz as she is Board of Elections Commissioner for Monroe County effective immediately,” Baynes said.

The vote was the latest development in a protracted intra-party skirmish over the elections commissioner post. Deputy Elections Commissioner LaShana Boose has served in an acting capacity since March when the previous Democratic commissioner, Colleen Anderson, resigned for a job in the administration of County Executive Adam Bello.

Party leaders were unable to come up with a plan to replace her and the matter ultimate wound up in court, where state Supreme Court Justice John Ark ordered the Monroe County Democratic Committee to hold an election among its members. Ortiz resoundingly won that election.

The Monroe County Democratic Committee recommended Ortiz for the post on July 27, but Minority Leader Vince Felder and four other Democratic legislators teamed up with the entire Reublican caucus to delay her confirmation.

Judge urges Monroe County legislators to vote on elections commissioner
A state judge said there was nothing precluding the Monroe County Legislature from installing a new elections commissioner now.
By David Andreatta
News
Ark had told the full Legislature that it had 30 days from the date Ortiz was recommended by the MCDC to confirm her or else that choice would fall solely to the Democratic caucus.

Earlier this week, during a caucus meeting, Legislator Baynes asked Felder if he intended to push for a vote on Ortiz before that 30 days was up. When Felder said he wouldn’t, Baynes motioned for a leadership vote. Felder ended the call but nine of the legislators voted to install Yversha Roman as minority leader.

Monroe County Democratic legislators say they have ousted their leader
Monroe County Democratic legislators, plagued by infighting for months, are clashing over who among them leads their caucus.
By David Andreatta and Jeremy Moule
News
Roman called this morning’s meeting to vote on Ortiz’s confirmation.The other eight members to participate were Rachel Barnhart, John Baynes, Josh Bauroth, Linda Hasman, Howard Maffucci, Joe Morelle Jr., Justin Wilcox, and Michael Yudelson. All nine of the Democrats voted for Ortiz.

Absent from the meeting were Felder and the newly formed Black and Asian Democratic Caucus, whose members include Assistant Minority Leader Ernest Flagler-Mitchell and legislators Sabrina LaMar, Calvin Lee, and Frank Keophetlasy.

The two sides are expected to appear in front of Ark on Friday for a previously scheduled check-in conference. At least some of the recent events are likely to come up, and Ark had previously encouraged Democratic leadership to confirm Ortiz for elections commissioner.

This article originally omitted Assistant Minority Leader Josh Bauroth as one of the Democrats to voted for Ortiz. It has been corrected.