The big black Limousine rolled up slow and ominous on Foro Sol Stadium in Mexico City. Sitting in the back, dressed in black and sporting Luchador masks, was instrumental surf rock band Los Straitjackets — the furthest thing from Mexican wrestlers as you can get. As the limo got closer, guitarist Greg Townson's anticipation mounted. He knew the band had a big following in Mexico, and both Mexico City shows had sold out. Still, he wasn't prepared for what he saw next.

"It was amazing," Townson says about the experience. "We have a strong following in Mexico of course, with the Lucha Libre masks, and we celebrate this silly side of Mexican Culture. The thing is Lucha Libre is so ridiculous; it's wrestling. I think if we were dressing up in Mariachi outfits it would be a different story because that's a very serious part of the culture. Lucha Libre is totally absurd and they know that. It's all just for fun. They totally get that." 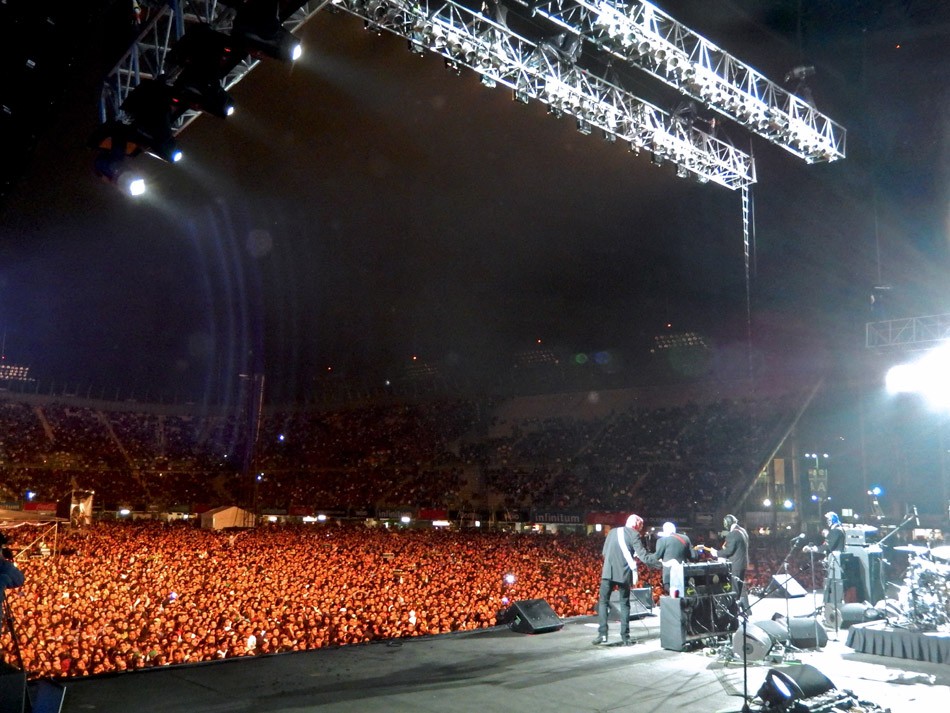 And now, there's even lampooning of the lampoon going on.

"After Los Straitjackets, there are bands playing instrumental music with Lucha Libre masks because of us," Townson says. "They've taken what we've done and run with it."

The Foro Sol stadium show was the culmination for Townson. The 49-year-old Rochester native was blown away.

"Man, walking out on that stage," Townson says. "I turned to a friend and said 'What am I doing here?' The day after that show in front of 50,000 people, I was booking a happy hour at Abilene."

Rock 'n' roll, big or small, is in the man's blood. He's a singer, a songwriter, a guitar player, and producer with an unlimited drive that won't be denied. And according to Townson, the same goes for those he works with.

"They're all musicians and they can't help themselves," he says. "There is no plan B."

Whereas the multiple layers of Townson's musical career may read like a sort of contingency plan, they are all equally important. He's had some extraordinary experiences along the way.

Starting off in the Rochester music scene in The Essentials, which morphed into the ramshackle, NRBQ-esque boogie-bar-band The Salamanders, Townson had the opportunity to work with legends like Bo Diddley, Bill Doggett, and Pee Wee Ellis to name a few. Most notably, Townson is known for his 15 years fronting The Hi-Risers — a post Mersey beat, poppy roots rock outfit which packs any venue it plays. This included venues with Los Straitjackets.

"The Hi-Risers did a bunch of shows on the road opening for Los Straitjackets, further solidifying the friendship. When guitarist Danny Amis aka Daddy O Grande got sick, Townson was Amis' first pick to replace him.

"I couldn't say no really," Townson says. "And I loved the music and I loved all the guys."

Townson assures that The Hi-Risers still exists. But after 15 years, it's not on the top of his list of priorities, though he pines a little.

"I felt like I needed a break," he says. "I wanted to put out my solo record, I wanted to do production work, I wanted to do projects besides The Hi-Risers. It's been a wonderful thing and I miss it right now more than ever. It still exists. In fact, I just spent a lot of effort and time and money into an archival project of all of our stuff. I mean, we put out eight records with tons of outtakes, and with digital technology being what it is, this stuff could disappear. It's not like tape; tape is forever."

Labels in Spain and Germany are gung ho to re-issue the band's material. The Hi-Risers' tour of Spain last year sold out in every city it played.

As Townson brings up more and more activities keeping him busy, he refers to his notes.

"I have to," he says, laughing as he scans down the list written on a rumpled piece of paper. "Because I can't think straight. There's all this stuff."

He's played on singer-songwriter Eleni Mandell's record "Let's Fly A Kite" for Yep Roc. It has a "kind of a John Doe, angry waitress feel to it," Townson says.

He has produced Hillbilly Moon Explosion from Zurich. And he got the opportunity to record some of his new solo CD, "On Your Side," in London at Gold Top Studios with members of Nick Lowe's band.

"I love Nick Lowe's records," Townson says. "And now I'm working with the same people. It's one of the luckiest things that's happened to me."

"Being an instrumental band has been an advantage," he says. "Most of the time, music supervisors are looking for instrumental pieces of music." He currently has 50 different song ideas in the works.

Despite the globetrotting, Townson's home and heart are in Rochester.

"I want to play locally," he says. "I love our fans here. I truly appreciate the support that we've gotten over the years. I do not take it for granted."

Townson is a familiar face in Rochester rock 'n' roll, and has been for years. His easygoing smile belies the guitar monster onstage. With Los Straitjackets there's a bit more mystique ... and longevity.

"That's the best thing about it for me," he says. "I get to take off the suit and mask and then go out into the audience and hear people talk about it. Because then you really hear the truth."

"'They were cool, but those masks were really stupid,'" Townson relays. So even though the band remains ageless (and anonymous) behind its masks, Townson doesn't necessarily see the need.

And chances are he will.