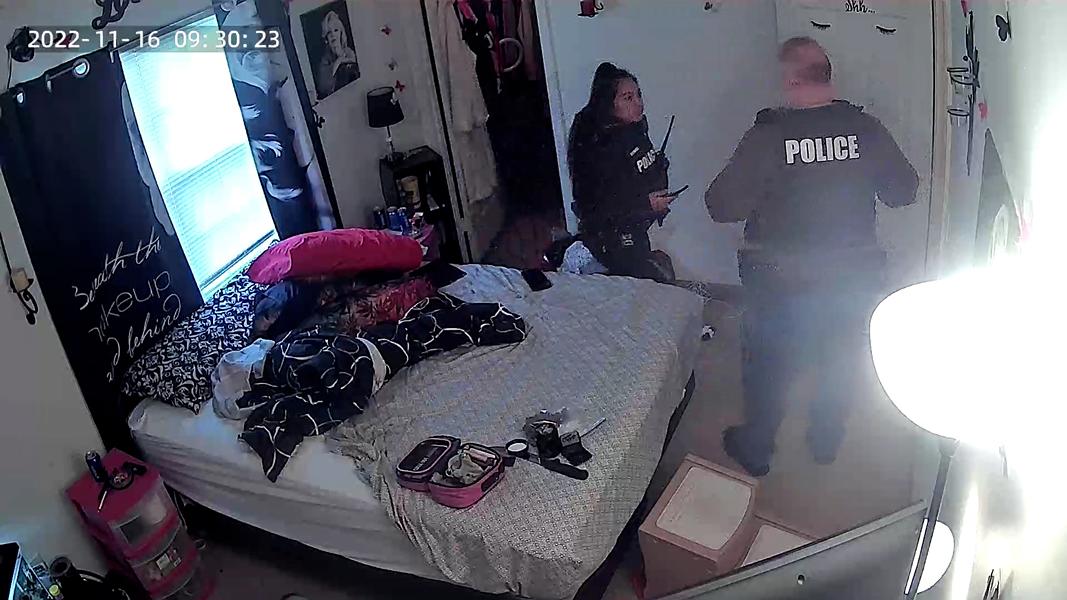 PHOTO BY MAX SCHULTE Parole Officer Doris Hernandez (left) and a second, unidentified officer, captured by Shannon Carpenter's web camera.
Shannon Carpenter and her boyfriend John Grandberry were getting ready for the day on Nov. 16 when there was a knock on the door of their Greece home shortly after 8 a.m.

Outside were six officers from the state Division of Parole who announced they were there to search the house. Grandberry was on parole after serving prison time for a criminal possession of a weapon conviction. Officers from the Greece Police Department would arrive later to assist.

Four officers entered, and when they made their way to the bedroom, Carpenter switched on a phone-activated web camera, aimed at the bed and closet.

The video captured officers scouring the room, combing the closet, drawers, and under the bed. They found a handful of items they questioned and, Carpenter said, eventually confiscated — a large kitchen knife, a bag of cannabis and a scale, a gun, and $6,000 in cash that was kept in a pair of pink Timberland boots.

Following the discovery of the items, around 9:30 a.m., one of the parole officers, identified by Carpenter as Doris Hernandez, appears to type a message on her phone and hand the phone to her colleague, an unidentified male officer. He glances at it, hands it back to her, and they whisper inaudibly.

The male officer then peeps out the door before turning back to Hernandez.

“You’re right,” Hernandez replied, pointing a finger gun at the other officer.

“As long as there’s enough money to go around,” he said.


The incident has since become the basis for pending litigation brought by Carpenter and, according to the Greece Police Department, an investigation by New York State Police.

Hernandez has since been suspended with pay, according to the state Department of Corrections and Community Supervision, which oversees the Parole Division. Thomas Mailey, a spokesperson for the agency, did not give a reason for Hernandez’s leave and did not respond to a question sent via email of whether the unidentified male officer had been suspended.

Meanwhile, the search put Grandberry back behind bars. He is being held on violating parole for possessing a weapon, a scale, and drugs, according to the Monroe County Jail Census.

Carpenter, who provided the full three hours of video to CITY, said she had never seen the gun, and that the knife, cannabis, scale and money all belonged to her. The money, she said, she saved while working for a food truck.

“It’s hard because it was right before the holidays,” Carpenter said. “I dip into that when it’s time for rent or something like that, and now I have nothing.”

In December, Buffalo-based attorney Brittany Penberthy filed a notice of intent, a precursor to a lawsuit, with the Department of Corrections and Community Supervision and the Parole Division. A notice of claim, a similar kind of legal document, was also filed against the Greece Police Department.

The notices argue that Carpenter was a victim of unlawful search and seizure. Neither notice identifies any officer by name.

“As a result of the aforesaid incident, the claimant, Shannon Carpenter, was subjected to numerous violations of state and federal civil rights, and sustained mental anguish, pain, and suffering and shock to her system as a result of subjects’ unlawful actions,” the notices read.

Carpenter also filed a complaint with the State Police. In a statement, the Greece Police Department said the State Police were investigating and that Greece officers were not the focus of the probe.

“The New York State Police is conducting a criminal investigation into the allegations referenced in the notice of claim filed on behalf of Shannon Carpenter,” the statement reads. “The Greece Police Department is cooperating with the investigation, and members of the department are not the subject of the investigation.”

In a phone interview, Penberthy said she believes Carpenter’s story is not an isolated one, but rather a common occurrence which is difficult to prove. Penberthy is primarily a defense attorney, but has also filed several civil rights cases against the Buffalo Police Department.

“The crazy thing is you hear these complaints all of the time from parolees, from loved ones of parolees, that a parole officer did x, y, or z,” Penberthy said. “And the immediate rebuttal from any agency or what have you is, ‘Oh, don’t believe the parolee, we believe our parole officers.”

“There’s bad people in the world,” she continued. “And just because they sit at a desk for parole doesn’t mean they’re good guys.”

Carpenter cast the event as both financially and emotionally draining, and said she worried that what she believes happened to her was not a freak occurrence.

“That’s what makes me upset, how many other people did she do this to?” Carpenter said.