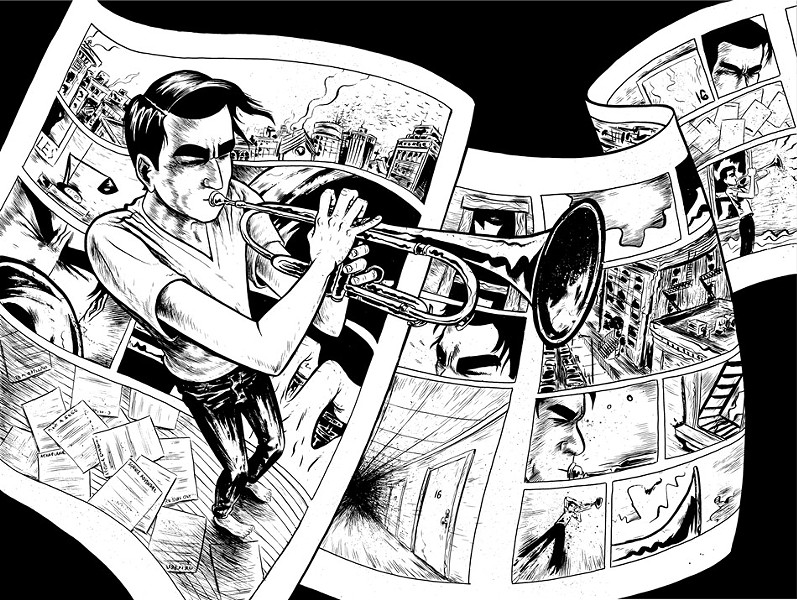 "Instrumental" opens with a group of musician friends living in an unnamed city that Chisholm illustrates with plenty of gritty character. While they're mostly content to noodle their way through regular gigs at the pianist's flower shop, the trumpet player and moody bandleader, Tom, dreams of more. Everything changes in dream-making but devastating ways when a stranger hands Tom a magical artifact — a potent horn he has no business tooting.

Tom's increasingly chaotic experience is reflected expertly by changes in illustration style. As Chisholm weaves together threads of music history and matters of the spirit, Tom's mundane life brushes against the inscrutable, and the story careens toward a shattering conclusion and resolution.

Unlike most comic books, "Instrumental" comes with its own soundtrack. Each of the seven chapters of the book is accompanied by a track from the album, which is an ethereal and intense opus Chisholm composed and performed with Aaron Staebell (drums), Ben Thomas (bass), Mike Conrad (piano), and Noah Berman (guitar). The album features Chisholm on trumpet, vocals, synth, and he also mixed it.

Chisholm is man of manifold talents with dozens of irons in the fire. In addition to his graphic novel projects, he sings and plays guitar with the rock band Talking Under Water, and performs wedding and party gigs with the cover band The Swooners. He's got a few freelance illustration jobs for books and comics currently cooking. And he's the director of the music lab at Hochstein School of Music & Dance, where he teaches jazz theory and improvisation and wears a bunch of other hats.

Among his past publishing endeavors, Chisholm did some work with Dark Horse Comics and contributed a few pages for a "Little Nemo"-inspired anthology called "Dream a Little Dream," which won an Eisner Award.

The seed of "Instrumental" formed around this time. "I had this idea of doing a book about a trumpet player who has a horn that kills people," Chisholm says. "That was the simple hook of the book in my brain."

The story continued to evolve in Chisholm's mind during the five years that he pursued his masters and PhD. He earned his doctorate in jazz trumpet from the Eastman School in 2013.

"When I was studying for the comps test, the big 14-hour test at the end of the doctorate at Eastman, I came across all of these music history figures who were somehow involved in mysticism or the occult," Chisholm says.

Things clicked into place. "I was like, this is it! These people have to be in the book," he says.

The identity of some of historic figures Tom encounters — John Coltrane, Mozart, and Hildegard of Bingen — are more obvious than others when they appear in cameos throughout the work.

"I deliberately don't name them, because Tom doesn't know who they are," Chisholm says. "He's not a student of music history per se."

Chisholm began working on "Instrumental" the day after he finished the test at Eastman. He finished it within 10 months by following the rigorous work routine patterned after his study habits.

"I was in this weird, fevered, completely obsessed space," he says.

Getting it published took longer; it's been almost four years since he began the book. Publishers were skeptical at first, Chisholm says, because he's a relatively unknown artist and author. "It's been a rollercoaster for me, just sitting on this for so long," he says.

When the book opens, Tom is already a relatively malcontent guy who grapples with the fear of mediocrity and yearns for greatness. But when he gets his hands on the destructive trumpet, the new power he wields does a negative number on him.

It's a fairly universal problem that creatives face.

"It's something I struggle with just like Tom does," Chisholm says. "I wrote some of the conversations as a reminder to myself to keep perspective as an artist. I don't think I'm as hell-bent on the rat race or hustle, the competitive aspect of it as Tom is, but I do personally lean a little too strongly on getting my work affirmed by outside parties, instead of doing it because I love to do it. And I do love to do it! When I'm in the zone and working, it's like time-travelling. It's an amazing experience. I lose hours, just working. But then when it's all said and done, it turns into this struggle of, 'what if people don't like it?'"

"Instrumental" is available through comic book stores and Amazon on May 24. Dave Chisholm will be present for a book signing and listening and art session at Rochester Central Library on May 31, from 6:30 to 8 p.m., and will present a version of the soundtrack at Joe Bean on June 15. Information: davechisholmmusic.com.