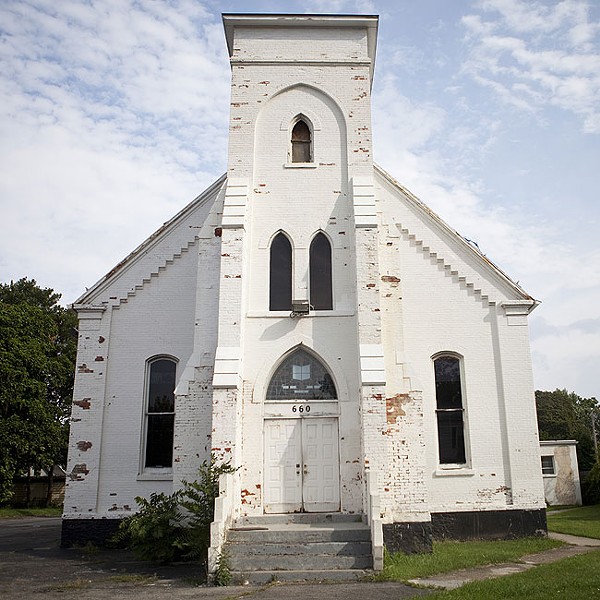 The Landmark Society has awarded a $1,500 grant to the Susan B. Anthony Neighborhood Association to cover the cost of an independent structural analysis of a former West Main Street church. Owner Marvin Maye wants to tear down the church and replace it with a Dollar General. He says the church building is beyond saving. (Maye's engineer's report is below.)

The building has been deemed by the city to be historically important, so Maye must get the Zoning Board's permission to proceed with his project. The board has postponed its decision until city officials decide if a more comprehensive environmental review is warranted.

Caitlin Meives, preservation planner with the Landmark Society, says the $1,500 should cover the entire cost of the analysis. The purpose is to determine if the building can be saved, she says.

"Is it structurally sound, or does it need to be torn down right now?" she says.

The report would probably not include a cost estimate for rehabbing the church, Meives says.

The hitch is that Maye must grant permission for the engineer hired by the neighborhood group to enter the property. Maye initially consented, Meives says, but later changed his mind. The neighborhood association will continue to discuss the matter with him, she says.

Maye's application is controversial. Those in favor argue that the Dollar General would create jobs and help revitalize the southwest neighborhood. Others say the church is an important historical asset and that a Dollar General isn't an appropriate fit for an area that has received a good deal of investment over the last several years.