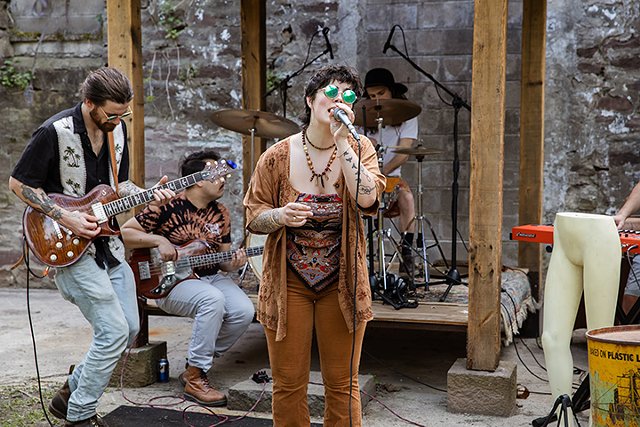 Trying to peg a new band to any one genre is a challenge, particularly when that band is Grace Serene and the Super Clean. But Rochesterians who venture out to Radio Social on Friday will get a chance to deduce the sound during the group’s three-hour set, starting at 8 p.m.

Is it groove-heavy funk-pop? Is it soul-infused rock music? At a certain point, the distinctions become meaningless, and the chemistry between the core trio — vocalist Grace Levendusky, a.k.a. Grace Serene, guitarist Zack Mikida, and bassist Arjun Baxter — takes over.

This compatibility is on full display in Grace Serene and the Super Clean’s recent video for “Slow Down,” which the band submitted as part of the NPR Tiny Desk Contest. The remarkable thing is not that the musicians are in sync, but that they coalesced so quickly.


The band began writing and playing original songs in January. Tracking for a forthcoming full-length album, called “Adrenaline Rush,” has already been completed and preliminary mixing is underway.

Ever the overachievers, Levendusky, Mikida, and Baxter have also begun writing additional material they anticipate will materialize in a second collection of tunes by the end of July.

It’s all the more curious then, that with the band developing its burgeoning catalog of tunes and venues opening their doors once again to live music, Levendusky is moving to Nashville.

She calls the timing “horribly awful,” although the decision to change her scenery was a long time coming. “This band kind of snuck up on me a little bit,” she says.

Moving forward, however, the band plans to have an active footprint in both Tennessee and Rochester. Beyond plans to collaborate virtually, several upstate New York shows are in the works for September. Eventually, Mikida and Baxter plan to visit Nashville, add more musicians to the band’s ranks there, and further develop the band’s sound.

Whatever direction the music takes, it’s undoubtedly rooted in the versatility of Levendusky’s voice. The dynamic singer’s ability to articulate fluid vocal runs gives things an air of R&B, and her effusive delivery reveals the power and stamina of a soul singer, but she projects a raw energy that is classic rock ‘n’ roll.

“I don’t necessarily write for my voice,” Levendusky says. “I feel like my voice fits when I write something that means something to me.”

Grace Serene’s last multi-song recording was the solo EP “Scarlet,” a mainstream pop effort released in 2015 when Levendusky was still a high school student in Avon. Back then, she said, her focus was as much on achieving widespread success as making music, and that a pop album seemed the most direct way to achieve popularity.

“I would describe that project as somebody else picking an outfit for you,” Levendusky explains. “And you put it on, you're like, this looks really good. It matches, it's really fun. But it's not what I would choose to wear.”

Pop music was never truly in her wheelhouse, she says, and the current songs being created by Grace Serene and the Super Clean are closer to Levendusky’s own tastes as a singer. She cites the music of Michael Jackson, Stevie Wonder, AC/DC, and Lenny Kravitz — all soulful, dynamic performers in their own way — as artists she had tuned her ears to growing up.

It makes sense then that the new crop of songs coming out of the “Adrenaline Rush” sessions each have their own distinctive flair — from the retro soul of “Paper Dolls” and the Fleetwood Mac-esque title track to the ’90s R&B evocations of “Warfare” and the electrified backwoods blues on “Daisy.”

“I just think I finally got to the point where I was able to have the confidence to do something that wasn't as mainstream, and then I met dudes like [Mikida] and our bassist Arjun, and a lot of different musicians I've worked with over the years that have been able to agree creatively with me and be able to kind of make that that dream come to life,” Levendusky says. “So I think it's more just making the decision to actually do it — and not do what was easiest.”