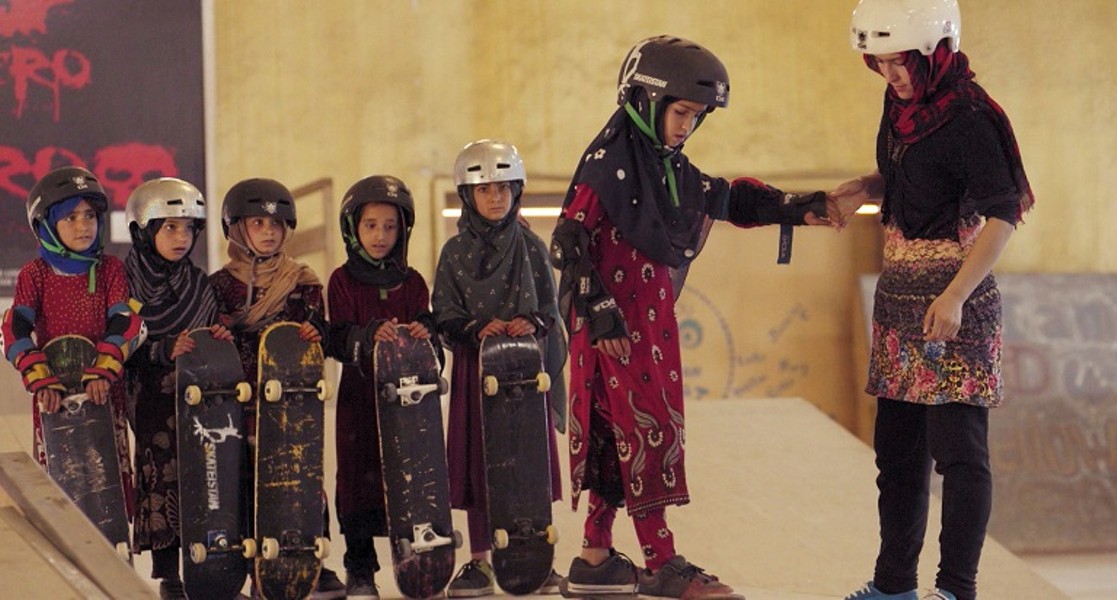 PHOTO COURTESY SHORTSTV A still from "Learning to Skateboard in a Warzone (If You're a Girl)."

Opening this week are the Oscar Nominated Shorts Programs, the popular annual showcase of the animated, live-action, and documentary short films nominated for an Oscar at this year's Academy Awards. The 2020 nominees are a remarkably strong collection of films, and in a year when the Academy again made news for not nominated any female filmmakers for its directing category, it's heartening to see so many women directors represented across each of these programs.

As usual, the shorts are split into separate programs based on category (the documentary shorts will be screened together instead of split into two programs as in previous years).

Moscow-born filmmaker Daria Kashcheeva's melancholy drama "Daughter" explores the relationship between a woman and her estranged father. Sitting with her ailing father by his hospital bed, the woman retreats into her memories, focusing on a moment of childhood misunderstanding that carried a reverberating impact on their relationship over the years.

The sweet, funny, and heartfelt "Hair Love," from directors Matthew A. Cherry, Everett Downing Jr., and Bruce W. Smith, centers on the relationship between an African-American father and his daughter, as he faces one of his biggest parenting challenges yet: doing her hair for the first time.

The adorable "Kitbull" is one of the first batch of films created under Pixar's SparkShorts program, which provides the studio's young artists with limited resources to produce their own independent passion projects. Director Rosana Sullivan uses simple but wonderfully expressive 2D character design to show the unexpected bond that forms between a scrappy stray kitten and a gentle pit bull.

Bruno Collet's somber "Mémorable" offers a heartbreaking window into the mind of a painter stricken with Alzheimer's. Objects melt and morph, and the film's images grow increasingly surrealistic as the man's deteriorating memory leaves him lost in a strange, untethered reality.

Siqi Song's "Sister" finds a man recalling his childhood memories of growing up with a pesky kid sister in 1990s China. Told through black-and-white felt stop-motion that recalls the fuzzy texture of childhood memory, the film builds to a surprisingly emotional conclusion.

Chronicling the deadly 2014 sinking of the Sewol passenger ferry in South Korea, Yi Seung-Jun's harrowing "In the Absence," uses footage recovered from the sunken vessel and interviews with surviving family members to deliver a fierce condemnation of the failures in leadership and communication that led to the unnecessary deaths of hundreds aboard the ship.

In "Learning to Skateboard in a Warzone (If You're a Girl)," director Carol Dysinger trains her camera on the day-to-day operations of a school for girls in Kabul, where students learn to read, write, and -- somewhat unexpectedly -- skateboard. It's an inspiring tale of courage and how education can be its own unique form of resistance.

John Haptas and Kristine Samuelson's "Life Overtakes Me" focuses on three refugee families living in Sweden, each with a young child afflicted with "resignation syndrome," a mysterious, dissociative condition causing them to retreat into an unresponsive, coma-like state for months on end. A sobering look at a little-reported effect of the global refugee crisis.

"St. Louis Superman" follows Bruce Franks Jr., a Ferguson activist and battle rapper turned member of Missouri's overwhelmingly white and Republican House of Representatives. Directors Smriti Mundhra and Sami Khan chronicle Franks' efforts against the epidemic of gun violence in his city, as they capture a stirring portrait of one man's fight to make a difference.

Directed by Fairport native Laura Nix, "Walk Run Cha-Cha" tells the touching story of Paul and Millie Cao, who fell in love as teenagers in Vietnam but were too quickly separated by the war. Years later they finally reunited in California, and after decades of working to build new lives together they find a shared passion in ballroom dancing.

An emergency phone operator receives a call from a woman trapped in her kidnapper's moving car in "A Sister." A bit reminiscent of the 2018 Danish feature "The Guilty," Delphine Girard's thriller is nonetheless a masterclass of economical storytelling and escalating tension.

In the stark drama "Brotherhood," a shepherd living in rural Tunisia with his wife and two sons finds himself deeply shaken when his eldest son returns home from fighting in Syria, with his pregnant wife in tow. It's well-acted, but the contrived storytelling -- having characters withhold crucial information for no clear reason -- ends up fatally undercutting the impact.

The only comedy in the live-action crop, the winning "Nefta Football Club" finds two young brothers happening across a headphone-wearing donkey strapped with a massive amount of cocaine while wandering in the desert. When one brother decides to use their discovery for his own gain, this story takes some delightfully unexpected turns.

In Bryan Buckley's "Saria," two sisters dream of escaping to a better life while facing daily abuse and hardship at the Virgen de La Asunción Safe Home, a Guatemalan girl's orphanage that became the scene of a 2017 real-life tragedy. A compelling story, but one that I couldn't help feeling would benefit from a feature-length treatment.

A pair of harried New York City parents face a crisis when a young, free-spirited couple moves into the apartment facing theirs in "The Neighbors' Window." As they find themselves increasingly obsessed with observing the couple's carefree lives, Marshall Curry wrings plenty of emotion, humor, and heart from this "grass is always greener" tale.