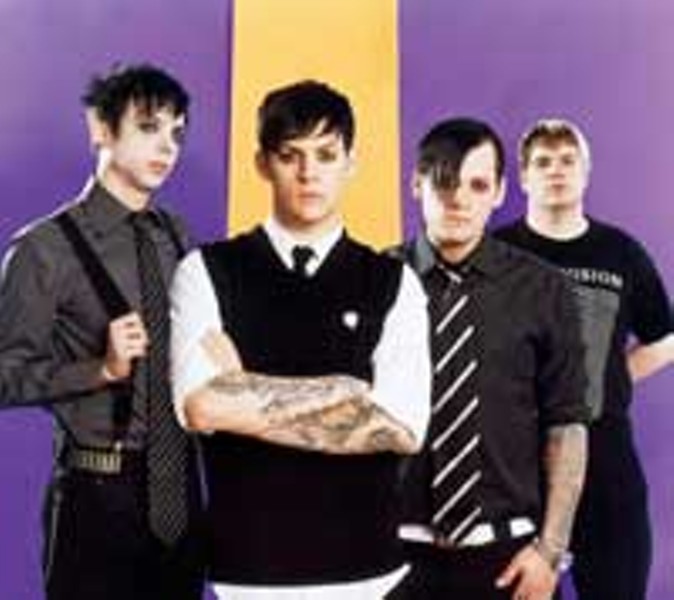 Good Charlotte is not a punk band. They'll be the first to tell you, too.

But when Good Charlotte exploded out of Waldorf, Maryland in 1996 they were almost immediately labeled "punk" by a media that's still shocked by tattoos and eyeliner. With boyish good looks and pop sugar in their punk tanks, the band was perfect for kids who wanted punk without the threat or full-on lifestyle commitment.

Their previous two records, Good Charlotte (2000) and The Young and the Hopeless (2002) --- which went triple platinum --- were a lot more bare-boned than the band's third and newest album, The Chronicles of Life and Death.

The album's opening track, "Once Upon a Time: The Battle of Life and Death," isn't punk either. It's a grandiose orchestral affair that swirls and builds ominously. Fairly dark and epic, it serves to introduce the work of a band that is maturing... or at least one that has a great big studio budget.

"This was the sort of record we always wanted to make," Martin says. "I guess we didn't have the experience before to make a record like this."

"I think when you first present your band you kinda want to strip yourself down," Martin says. "You want your first record to be kind of raw just to let people know what you're about. I think we just kept things basic mainly 'cause we just wanted people to hear our sound. Second of all, we didn't know how to do more."

Chronicles beautifully extends beyond the textbook loud-fast of earlier Good Charlotte. Besides incorporating a whole orchestra, band members donned new instruments like cello and keyboards. The song structures are a lot more adventurous and exploratory.

But the lyrics are still a little simple and under-entendre'd, if you will. Despite the undeniable song hooks (I've been singing "I Just Wanna Live" for days), the storylines are frankly a little high school. Then again white, middle-class, high-school kids seem to be the Good Charlotte demographic, a group that relates better to direct, unadulterated, unmasked anger.

Despite having the balls to play rock songs with instruments outside the stock rock arsenal, the album is still big and powerful with excellent song construction and execution.

"I think we're all, like, into catchy songs," Martin says. "You know, I don't wanna make some artsy record you can't sing along to. I like bands that push the boundaries of pop music but still use the same pop-song format." This is something the band has maintained on all three albums.

"It's just a matter of different instrumentation this time," he says. "I think we all were more comfortable with our instruments and everyone was really open to trying new things."

Maybe some of those new things will help shed mislabels like, say, "pop-punk."

"That's fine if people want to call us that," Martin says. "But I think with this record we wanted to show them that we're not a pop-punk band, that we're just a rock band."

The band still gets dismissed by punks and self-proclaimed punks. On last year's Vans Warped Tour it became hip for smaller punk bands to slag Good Charlotte, who headlined the main stage. Rancid's Lars Frederickson made a point of questioning the band's cred. And bands like New York City gutter punks The Casualties, who toiled away on the obscure side stages, did the same.

"I used to get upset about that stuff," he says. "And I kinda just realized that I really don't care about punk music so why should I care what anybody else who likes punk music thinks about our band? Because I really think it's two different worlds. I don't think we're there preaching we're something that we're not. People are gonna talk and we're totally cool with it. But none of them have a clue."

Good Charlotte has more important things to concern itself with, like a fan base that's growing and growing up with the band. These are fans who started off with Good Charlotte when it --- like it or not --- was a pop-punk band.

"We talk to our fans all the time," Martin says. "The week the record came out we were doing signings all over the place. And we were asking 'what do you guys think of it? What do you like?' And everybody seems to love it. And that's cool with us."

In spite of its detractors Good Charlotte continues to thrive. The band's all over MTV and has been featured in publications like Rolling Stone, Alternative Press, and The New York Times. And this probably just burns up the mohawks who associate success with sell-out.

"Jealousy causes a lot of things, dude," Martin says. "When I was younger, of course, I was probably saying the same thing about other bands."

Would he have talked shit about Good Charlotte?