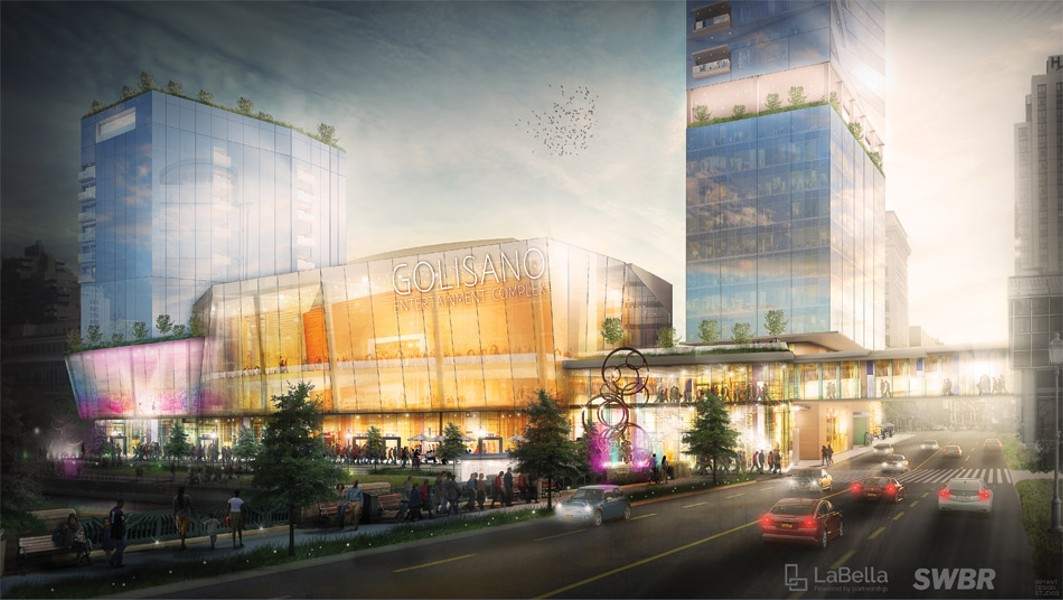 IMAGE COURTESY LABELLA ASSOCIATES AND SWBR
[UPDATED] Philanthropist Tom Golisano has canceled his pledge of $25 million for a new theater for the Rochester Broadway Theatre League.

Golisano announced the change in a press release this morning.

“I originally made this decision to support the Performing Arts Center in 2016," he said in the statement. "Now two years later, the project is no closer to becoming a reality. It has dramatically changed in scope, becoming part of a larger entertainment complex, which is not in line with my philanthropic priorities. It has also not garnered the financial support it needs from the community. It is time for me to move on to the many other projects we are working on in this region that need support and that are more aligned with my philanthropic priorities.”

"We are disappointed in losing Mr. Golisano as the naming rights giver," RBTL's CEO Arnie Rothschild said in an e-mail. "We will continue to work to make this important project a reality and change our downtown."

The change took city officials by surprise. "It was a bolt out of the blue," spokesperson James Smith said.  Just two weeks ago, the Warren administration announced a major development project by the river, that included a theater for RBTL, a smaller theater, a hotel, and residential units. Renderings for the complex included a large sign reading "Golisano Entertainment Complex." The RBTL theater had been planned for Parcel 5, as part of a theater-apartment project, but its location there became in doubt after news that the FBI was investigation one of the Morgan development companies.

Smith said this morning that city officials had talked with Golisano prior to the announcement. "He was on board," Smith said.

City officials have released this statement:


“Today we were informed that Tom Golisano is withdrawing his funding commitment for the Performing Arts Center project. While this development is disappointing, we remain committed to this important, job-creating project and its potential to transform our city center. As part of the larger ROC the Riverway program, the ‘Riverside Performing Arts Center Project’ has never been more viable and the opportunity to work with Governor Cuomo, the State of New York, organized labor and the private sector to invest in a project that will deliver more than 1,000 needed jobs for Rochester residents is too important to give up.”