Woods, a native of Fairport, fell in love with French cuisine while living in Napa, California, where he attended the Culinary Institute of America and worked at French bistro The Girl & The Fig. Since moving back to Rochester a decade ago, Woods has cooked at Monroe's, Jeremiah's, The Radisson hotel, and Route 96 BBQ. But the dream of opening his own French bistro never went away. When Italian restaurant La Bella Vita vacated 1759 Empire Boulevard to move down the street, Woods snapped up the space. Following renovations -- new floors, a larger bar, a fresh paint job -- The Peppered Pig opened for business in August 2019.

All menu items are a la carte; if you want frites with that, you'll have to order them separately. Woods recommended ordering a few dishes and sharing them around the table, and I was happy to follow his advice. Ordering to share has become my favorite way to dine out. Not only do you get to sample more dishes and eat more adventurously, you're also relieved of the anxiety that comes with committing to an entree you may not like. (Nothing ruins a dining experience like the FOMO of knowing your friend's entree is tastier than yours). So I invited four friends to join me at The Peppered Pig on a recent Wednesday night. 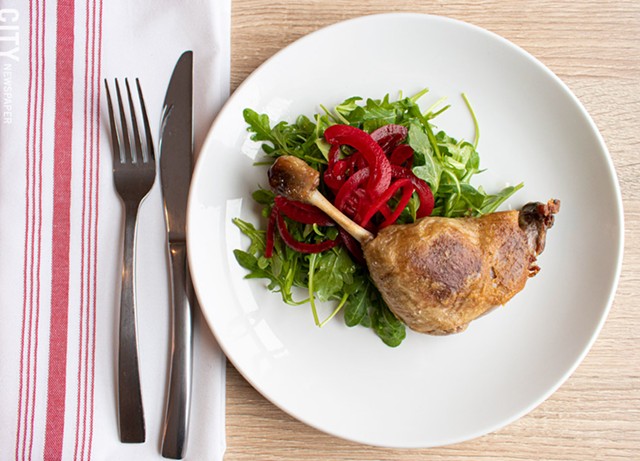 The wine list features mostly French and California selections, and cocktails and local beer are also available. Knowing we were choosing a variety of dishes and likely to linger for some time, we chose one bottle of crisp Sauvignon Blanc and one bottle of red Côtes du Rhône for the table.

We began with a bowl of mussels ($16), steamed in broth and wine and served with fennel and grilled bread for soaking up the juices. The clean, delicate flavors proved to be an excellent warmup for the decadence to follow.

Next the braised pork belly ($14) arrived, an impossibly tender, bacon-y slab with a crispy mahogany exterior that Woods says takes two days to make. The meat is laid over sweet potato puree, topped with matchsticks of green apple, and encircled by loops of soy caramel. I found I barely needed the caramel, as the melt-in-your-mouth pork belly was luscious enough. One of my dining companions pronounced the dish "exceptional," as he cut himself a sliver and passed the plate around.

Our shared mains included the quiche Lorraine (with bacon, cheddar, and onion; $12) which was creamy, pudding-like, and noticeably heftier than your average quiche. Woods explained that it's made in a springform pan rather than a pie pan, which accounts for the quiche's mile-high thickness. If you want to take one home, whole 10-inch quiches are available to order with 24 hours' notice.

The bouillabaisse was next, a Provençal seafood stew of various fish, shellfish, fennel, saffron, and tomatoes. The types of fish in a "traditional" bouillabaisse can vary based on who you ask, but The Peppered Pig's version contains scallops, mussels, and grouper. The stew was bright and richly-flavored, reminiscent of the seaside without being fishy.

I was most looking forward to the duck confit ($16/one leg, $23/two legs), and it did not disappoint. Duck confit is made by salt-curing pieces of duck (in this case, the legs) and cooking the meat slowly in its own fat. The confit cooking method was originally a way to preserve food in the pre-refrigerator days, but the technique continues to thrive in the modern era because...well, it produces a delicious product. Outrageously rich, duck confit is dish for a special occasion (or a Wednesday). The dark, oily meat seemed to fall off the bone as if by magic, and a small mound of peppery arugula and pickled red onions was there to cut through the richness. I think the plate of duck made it all the way around the table...when it wasn't parked next to my elbow.

The Pig Burger ($15) was the favorite dish of two members of our party. This decadent creation is served between two thick slices of sourdough, which are just barely enough to contain the two beef patties seared in duck fat, plus brie, bacon, tomato jam, greens, and a slathering of tarragon aioli.

Keeping with our theme of ordering the seemingly most indulgent items on the menu, we had to have the cassoulet as well ($20). This rustic, slow-cooked casserole hails from Southern France and contains a mix of meats and beans. Woods' version features pork belly, duck confit, house-made sausage, white beans, and bread crumbs. The sausage was juicy and tender, the beans pleasantly al dente, and I welcomed the opportunity to sample the pork belly and confit once more.

Rather than ordering a side of frites, we opted for Brussels sprouts (all sides are $8), which are fried and dressed in a walnut caper vinaigrette with scatterings of bacon. Though we agreed the seasoning was applied a little too heavily, we loved the crunchy core and blistered exterior of the fried sprouts.

We needed little prodding to order dessert, which we also shared around the table: a deeply caramelized crème brûlée, which broke into perfect shards with the lightest tap; a velvety chocolate mousse with chocolate chips dotted throughout; and a simply enormous sourdough and cranberry bread pudding with caramel sauce (all desserts $7).

Though I didn't visit the restaurant for brunch, the menu looks promising. Among the offerings are duck fat home fries, a pork belly breakfast sandwich, and Cointreau-laced French toast with mascarpone and fig syrup.

Thus far, Woods says the restaurant has been fairly busy, especially on weekends. As the self-described "owner-operator-busser-bartender," Woods estimates that he himself is averaging roughly 90 hours a week at the restaurant, but that doesn't seem to bother him. "We put a lot of time and thought into what we do," he says. "A little attention to detail really affects the outcome."

Mary Rice is a freelance writer for CITY. Feedback on this article can be directed to becca@rochester-citynews.com.