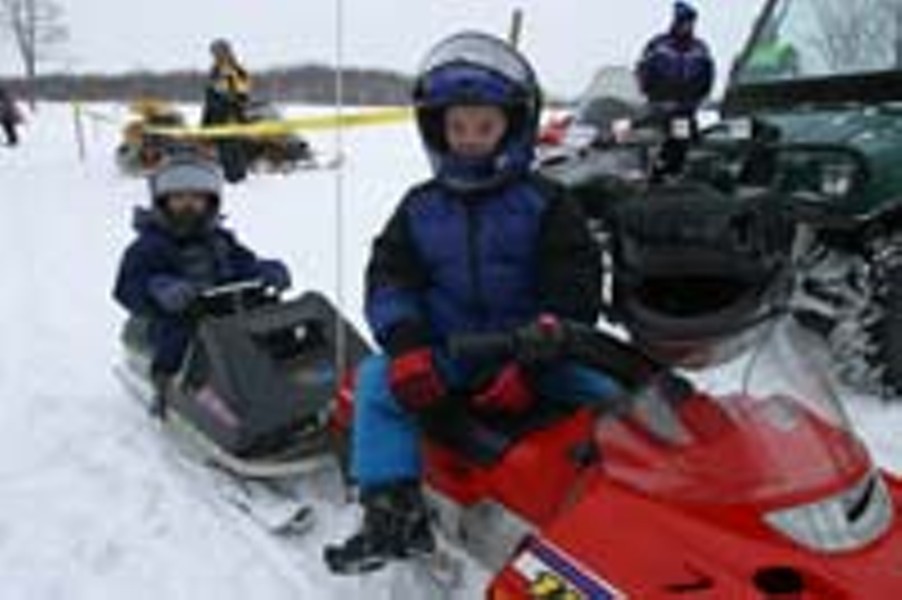 Kurt Brownell Kids take a break from the races at a Webster Ridge Runners snowmobiling event.

It wasn't a smart decision, and deep down Darrell Dietrich had to know that. But the idea of snowmobiling for a few days at his family's campsite was just so alluring that no ferocious snowstorm --- not even one that dumped four feet of snow in a matter of hours --- was going to cancel the family fun.

If this had been a movie, Dietrich might have been the winter version of Chevy Chase's frustrated Clark Griswold, who, in the 1983 movie Vacation, told his family that it would have so much fun once it arrived at Wally World fun park, it would be whistling "Zip-A-Dee-Doo-Dah" from its backside.

Tug Hill, located about 140 miles northeast of Rochester in Lewis County --- just west of the Adirondack Mountains --- is one of New York State's best places to snowmobile. On this night, Dietrich, his wife, Marlena, and his daughters, Darlene and Jennifer, parked their truck four miles from their camp, intending to snowmobile the rest of the way, as they always did. But it was 7:30 p.m., very cold, and the snow had begun to fiercely swirl and blow like it does across the Thruway during a snowstorm. It would blind the riders and hinder the sleds. But it would not change Dietrich's mind.

"I thought we could make it," the 56-year-old says slightly sheepishly, surmising that it might have been that audacious element of manhood that convinced him. "But halfway through, we got stuck. I had to walk two miles through waist-deep snow to get to the cabin, get some snowshoes, walk back and help my wife and daughters get to the campsite. It was 2:30 in the morning by the time we made it."

Fortunately, everyone was safe, and Dietrich ultimately beat the risk. Today, he laughs and says he would stay in a motel if faced with the same situation again.

Risk is part of snowmobiling's appeal, and snowmobilers are a risk-inclined group. When riders are confronted with a risk --- whether it's a snowstorm, an unmarked trail, or a speedometer inviting them to go faster --- the urge to take it is enticing.

There are 171,000 snowmobiles and 9,000 miles of trails in New York State. You can ride from Webster to Canada on a snowmobile trail. You can go over 100 miles per hour with the right kind of sled. You can also severely hurt yourself, though Dietrich says that the worst accidents are usually the result of riders not knowing what they're doing --- or about to do --- especially if they're fast approaching a surprise obstacle such as barbed wire.

"On average, there are about 20 to 25 snowmobiling deaths a year in New York State," says Randy Phillips, the 35-year-old president of the Webster Ridge Runners snowmobile club. "Two-thirds to three-fourths are alcohol and speed related."

Phillips laments that often the only time the general public hears about snowmobiling is when the media reports that a rider died from hitting a tree or nailing a fence.

In New York State, the number of fatal injuries is about one-hundredth of a percent of the number of registered snowmobiles. You almost have a better chance of winning the Mega Millions lottery than getting killed on a snowmobile. Still, the sport continues to battle that and other perceptions.

"Snowmobiles have this reputation of being loud, dirty machines that go out and scare rabbits," says Phillips. "And people think the sport appeals to NASCAR racer-wannabes. But that's not accurate."

"Snowmobilers are a good group of people," Dietrich adds. "When you're out on the trail, people are more than happy to help you if you need help or parts. They'll give you a tow somewhere. The group is close-knit. But we're fighting that same Harley Davidson image problem --- that idea that if you ride a Harley, you're automatically part of the Hell's Angels, driving through property and tearing things up."

The message that snowmobiling is a wholesome sport is beginning to filter out, say Phillips and Dietrich. And it is becoming more of a family-oriented activity, as compared with its primarily male-dominated spirit in the late 1960s and early '70s.

Dietrich, who has been snowmobiling since 1964 when he was a kid growing up in the Watertown, NY, area, credits technology for snowmobiling's wider appeal. He cites better-crafted engines and parts, plus comfort features such as heated handgrips and seats. When the first snowmobiles were introduced, he says, frequent breakdowns largely discouraged anyone else but men to try the sport. Apparently, men didn't mind being stuck in the woods in the middle of nowhere when things went awry.

Today, however, sleds have become so dependable that breakdowns don't occur that often, encouraging women and kids to get involved.

Snowmobiles can cost between $6,000 and $9,000. Dietrich owns Darrell's Inc., an Ontario, NY, snowmobile and lawn equipment dealership on Route 104, which he converted over from a car repair shop. He started selling snowmobiles in 1998 and has been selling more each year, another indication of the sport's rising popularity. It's an activity that anyone can enjoy.

"I enjoy trail riding at moderate speed --- 45 to 50 miles per hour," says Dietrich, who rides between 3,000 to 4,000 miles a year. "I like to look over the terrain and countryside and I try to find out all the scenic spots because about the only time you're ever going to see them is on a snowmobile."

Dietrich says that the vantage point you get riding a snowmobile in the wilderness is one you can't get anywhere else. On a snowmobile, he says, you can travel deeper and farther than you could on foot or on cross-country skis and see land you wouldn't usually see.

"I just like the freedom and access that you have in the wintertime with a snowmobile," agrees Phillips. "You're riding, looking around at nature, you see the pine trees and the snow. There's always a change in the scenery."

Most of the Rochester region's trails are on private property, owned by people who permit snowmobilers not only to ride on their land at no cost, but to machine-groom the land before the snow falls so that it's flat and free of debris when the season begins. Trails are usually 20 to 25 feet wide. Phillips and Dietrich suggest joining an area snowmobile club such as the Webster Ridge Runners (websterridgerunners.com, 265-1753) or the Williamson Driftriders (driftriders.tripod.com, 315-589-4979) to fully take advantage of the area's private trails.