June 03, 2020
A couple of weeks ago, the actor Stanley Tucci went viral. He simply posted a brief video in which he demonstrates how he makes a Negroni cocktail: a double shot of gin, a shot of sweet vermouth, a shot of Campari. It’s shaken with ice, garnished with an orange, which he first squeezes into the glass as he advises, “Don’t let anyone see you handle it like that.” Simple, yet elegant.

Others may quibble. The late Anthony Bourdain suggested a 1:1:1 ratio on the booze, don’t bother shaking, and just drop in an orange wedge. It’s a big world; to each his or her own.

This week was to be the seventh annual Rochester Cocktail Revival, a celebration throughout our taverns and cultural institutions. Due to the coronavirus pandemic, and now the threat of spontaneous social combustion in our cities, it’s been moved to September 8 through 13.

That’s a bit of a dry spell. Although, throughout the COVID-19 shutdown, the state graciously included liquor stores as among the essential services allowed to remain open. 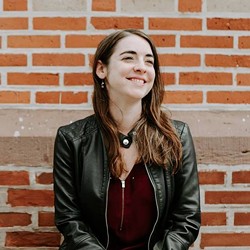 So with the postponement of the Cocktail Revival, and with so many people self-quarantining, at-home cocktail hours are a thing. Bring on Maya Rook, a local historian whose 5:30 p.m. class on Saturday, June 6, entitled “History Happy Hour: Classic Cocktails,” will be presented through the community classroom Rochester Brainery. Its presentations on subjects such as meditation, comedy improv, embroidery, and plant-based comfort foods have been moved from its classrooms on Anderson Avenue in the Neighborhood of the Arts to online.

Rook’s interpretations of history tend to be more shaken than stirred. Her June 18 History Happy Hour will be on the Lost Colony of Roanoke. She’s also done happy hours with titles such as “LSD and the Psychedelic Era,” “The Cult of Heaven's Gate,” “Christmas with the Donner Party,” and a few on a subject that she admits is kind of personal: the Salem Witch Trials.

“I have all these different topics, and as I go through them I find ways they’re all connected, so people who return for different classes, they start to see those connections as well,” Rook says. “Like, ‘Oh, somebody we talked about three months ago is actually connected to tonight’s talk as well,’ and you would never expect it. So I love tracing those threads and really making history fun; try to make it fun for people, try to make it relevant.”

Rook also teaches classes at Southern New Hampshire University, although the “at” in this sentence is not particularly operative. She’s never been to its campus, as the school is largely an online operation.

Saturday night, tending bar from her home in the South Wedge, Rook will be focusing on the Manhattan, the Martini, and the daiquiri. They’re straightforward cocktails, matching her own taste — particularly, what she calls the “clean” feel of a dry martini. With olives.

Familiar as they may be, these cocktails have a history. For those familiar with the whiskey-drenched personality of Ernest Hemingway, the fact that he was a daiquiri man — rum, lime juice, and superfine sugar — may seem surprising. In a passage from the novel “Islands in the Stream,” the writer describes the drink as “this frozen daiquiri, so well beaten as it is, looks like the sea where the wave falls away from the bow of a ship when she is doing thirty knots.”

Of course, Hemingway being Hemingway, grandma’s daiquiri didn’t quite meet his standards. So at one of his usual hangouts, Havana’s El Floridita Bar, the bartenders created the “Hemingway Daiquiri,” or “Papa Doble.” Skip the sugar, double the rum. Now, let’s go wrestle us some giant sailfish.

There is an easily perceptible darkness to Rook’s vision of history. It is the stuff that your high school history class probably skipped, but is consumed by adults who are sometimes called “lifelong learners.” Or, the morbidly curious. Rook’s “Christmas with the Donner Party” class falls into those categories. The Donner Party is “one of my areas of expertise,” she says. In 1846, a wagon train of pioneers heading to California took a shortcut through the Sierra Nevada mountain range and was trapped by the winter snow. The situation got desperate as they ran out of food.

“One of the women had actually kind of squirreled away a few items to save for her children,” Rook says. “Some bacon, some dried apples, some beans, and so on Christmas she surprised them by putting it all into a stew. It was one of the last nice things that they got to eat that year.

“Before all of the cannibalism started,” she says.

Does Rook provide recipes with that class?

“I actually do, for those who want it.”

She taught that class last December at the Blue Barn Cidery in Hilton. All of the proceeds went to New Yorkers for Better Libraries.

Libraries played a big role in Rook when she was growing up in Bethlehem, near Albany. She’d browse the shelves, graduating from the children’s section to young adult reading and, when she was in the fifth or sixth grade…what’s this? Books on witchcraft! And the Salem Witch Trials!

“It is a darker part of our history,” Rook says. “But there’s something that just captures people’s attention; they want to understand why they happened. And I think, of course, thanks to people like Arthur Miller writing ‘The Crucible,’ we still see a lot of connections between persecution and witch trials of the past, and things that happen today as well.”

History often remains relevant whenever we’re talking about humans and their basic instinct to crush beneath a pile of stones anything they don’t understand.

“To me I think that a witch is really somebody who feels a connection with the inherent magic of the world, and of being a human and connected to different energies,” Rook says. “So in that sense I do feel, if you call me a witch, I don’t really…” she pauses, searching for the correct words.

She’s not a Wiccan, she says. “I don’t, you know, have a practice of casting spells,” she explains. “But I do feel like I am somebody who is in tune with changing of the seasons and the natural world, and I do feel that for people right now who identify as witches, that’s really a primary aspect of it.

“It’s another way of experiencing the world and being alive, a lot of people right now, we’re seeing a renewed interest in general, and tapping into one’s inherent power, and learning how to work with it.”

And the deeper she explored America’s history, Rook discovered her own personal history as well.

“As I got older, I started doing my own family history,” she says. “I found out that I am descended from a confessed witch from the Salem Witch Trials, as well as some other people who were involved in the other side of things. I am descended from a magistrate who is actually responsible for issuing the arrests for about 40 people and, when he refused to do his job anymore, he started to doubt the trials, he stepped down from his role, he got accused of being a witch as well. So he and his wife had to flee the area. So thankfully, none of these ancestors ended up getting executed, but they were involved in the trials.”

And that persecution of suspected witches in 1692 and 1693 is startlingly easy to connect with today. “A lot of the Salem Witch Trials transcripts are available on line,” Rook says.