Going back to Greece

The "coming home" theme is a common one when it comes to telling the story of where people decide to open restaurants. Mark Chiarenza grew up in Greece and after being involved in opening and running various establishments in Rochester (Murphy's Law, Nikko, Char at the Strathallan), he decided he wanted to open his next venture where he grew up. Enter Paddington's Pub and Plate (3208 Latta Road), a casual bar and restaurant serving American fare.

The weathered wood bar runs nearly the entire length of one wall with tan, leather bar stools. Tall booths line the other side of the restaurant and there is table seating in the middle. Televisions are everywhere, with giant screens lining most walls and smaller screens tucked in the booths. Outdoor patio seating is also available.

Seth Lindahl is the executive chef, and the menu features starters like panko-crusted crab cakes ($12) served with a roasted corn salsa and Cajun tartar sauce, and a mac and cheese ($7) that is made in house daily (it's also available as a side). The Paddington burger ($10) is made with an 8-ounce ground chuck patty, New York State cheddar, bacon bourbon jam, lettuce, tomato, and garlic aioli. The BBQ sampler plate ($21) includes pulled pork, smoked beef short rib, grilled wings, and your choice of two sides. On the side menu, you'll find Polenta fries with mushrooms and goat cheese ($6), bacon braised kale ($5), and vinegary vegetable slaw ($4).

The craft cocktail menu includes the Spicy Mexican, made with muddled cucumber, St. Germain Elderflower Liqueur, Espolon Silver Tequila, and a kick of Sriracha. The Bloody Mojito uses blood orange puree to put a twist on the classic cocktail, which includes muddled mint, lime, sugar, and Bacardi Superior Rum. A large menu of beer — including 25 draft lines of mostly craft selections — and wine is also available.

Paddington's Pub and Plate is located at 3208 Latta Road. It is open Monday through Sunday, 4 p.m. to 2 a.m. The pub will be open at noon, Friday through Sunday, during football season. 227-7658. Check paddingtonspub.com for more information.

The Kitchen (5 South Main Street, Pittsford) has released its new menu available through September 12. The new menu features items like a cold smoked rock shrimp dish and an heirloom tomato and zucchini blossom salad. A vegetarian menu is also available. Call 310-2467 to make a reservation. 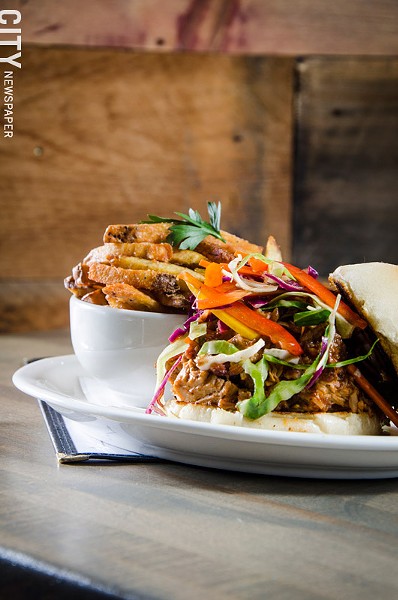 The Flour City Brewers Fest will take place on Friday, August 21, from 5 p.m. to 9 p.m. at the Rochester Public Market (280 North Union Street). Celebrating its 20th anniversary, the event will feature more than 100 craft beers, a selection of hard ciders, and music by Jumbo Shrimp and the Amy Montrois Trio. General admission tickets are $35, designated driver tickets are also available for $10. Additional information is online at flourcitybrewfest.com.

Black Button Distilling (85 Railroad Street) will hold a tasting event for its new Bespoke Bourbon Cream on Friday, August 28, from 6 p.m. to 9 p.m. The bourbon cream is similar in concept to an Irish cream but has more vanilla and caramel flavors. More information can be found at blackbuttondistilling.com.

Via Girasole Wine Bar (3 Schoen Place) has opened in Pittsford.