God of our fathers

When "Jesus Christ Superstar" debuted on Broadway in 1971, it was an avant-garde rock musical welcomed by a swath of hippiedom. Not exactly the traditional teachings of Sunday school; but a creative take on the story of the son of God nonetheless. Consider it the "Hamilton" of its time — a flashy, pop culture retelling of historical events. Through Sunday, Rochester audiences have the chance to see the show's 50th anniversary tour at the Auditorium Theatre as part of RBTL's current season.

The plot of "Jesus Christ Superstar" loosely centers on the last week of the ministry of Jesus Christ, told largely from the perspective of Mary Magdalene and Judas Iscariot. The script is almost entirely sung, and a large portion of the cast plays instruments throughout the show, accompanied by an onstage orchestra. At first glance, this could be a tribute band for something like Led Zeppelin or Pink Floyd, but with costumes that feel straight out of a Kanye West fashion show. In fact, there's a few moments in this "Jesus Christ Superstar" that hit à la West's Sunday Service events to promote his September 2019 album "Jesus is King." Coincidence? Maybe.

"Jesus Christ Superstar Live in Concert" debuted on NBC on Easter Sunday in April 2018, starring John Legend as Jesus and Sara Bareilles as Mary Magdalene. It's still considered one of the more successful live, televised Broadway productions and it catapulted "Jesus Christ Superstar" to renewed popularity.

Religious conservatives have scoffed at liberties taken with the musical's script — the resurrection is left out of the story, and Mary Magdalene is depicted in love with Jesus — but there's a deeper level to the production overall, and it's clear the writers knew the bible. Moving scenes and subtle references abound for those familiar with the scriptures. 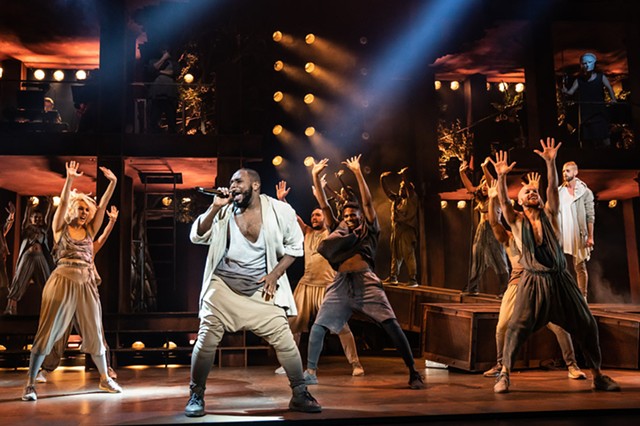 The 50th anniversary cast is filled with musicians and Broadway babies alike; the members' collective resume as listed in the playbill was more than impressive. In the role of Jesus, Aaron LaVigne looks the part of a worship leader from a Nashville megachurch with his blonde top knot and scruffy facial hair. He plays the son of God with a meekness the role demands, and portrays deep emotion during the betrayal and heartbreak of the crucifixion (yes, spoiler alert: Jesus is crucified at the end). LaVigne also boasts a powerful voice and plays a mean guitar throughout the show. Opposite him in the perhaps larger-than-justified role of Judas is James Delisco Beeks, another powerfully-voiced performer who nails (pun intended) the fluctuation between loyal and unlikeable apostle. Other notable performances come from Jenna Rubaii (Mary Magdalene), who hits glorious belt notes on "I Don't Know How to Love Him"; Tyce Green as the screamer-rock, shudder-inducing Annas, and Paul Louis Lessard as a Boy George-esque Herod, who elicited many cheers from the crowd during his routine.

The multi-purpose set includes a second level that provides a space for the band as well as visual interest, and a layer of tall trees upstage provides some sense of Jerusalem beyond the flash and glitter further downstage. Lighting design by Lee Curran factors especially heavily into the drama of the show's second half, channeling otherworldly effects while still feeling like a rock concert. 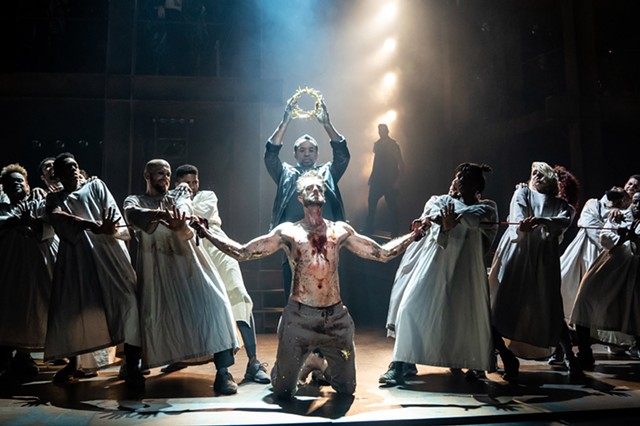 Clocking in at 90 minutes without an intermission, "Jesus Christ Superstar" is the second shortest offering in RBTL's current season ("Come From Away" in November had a similar run time). It's a refreshing, occasional switch-up from three-or-more-hour musicals with intermissions. Tuesday's sold-out audience speaks to the enduring popularity of the musical, and the range of ages was an interesting study in the current appeal. Elementary-aged school children sat, sleep-eyed, beside their parents through guitar riffs and a violent, glittery crucifixion, posing the question: will these school children take their children to the next reunion tour in 20 years?