GM gives the village of Honeoye Falls some vehicular zip. 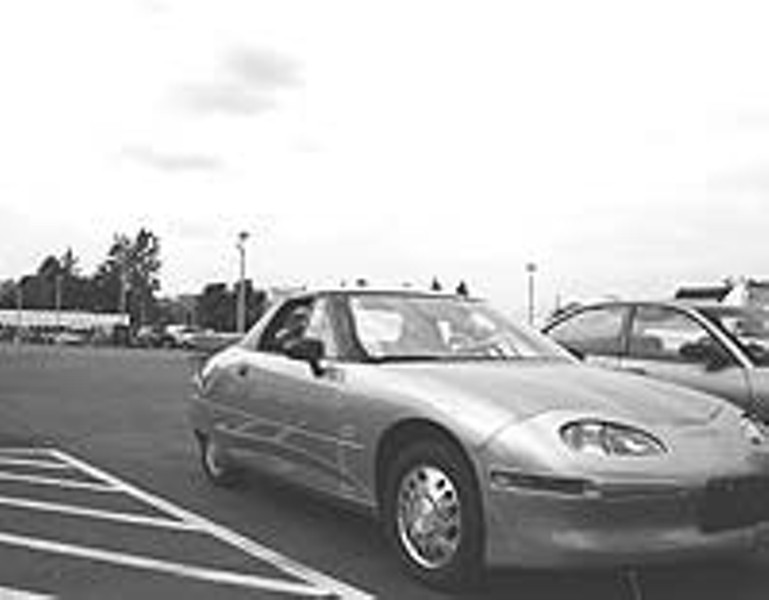 It's no insult to say the village of Honeoye Falls is "off the beaten path." In fact, that's the phrase Mayor Steve Gustin uses to describe his hometown. A quick look at the map confirms the description. The village --- well known for Victorian homes, businesses, and restored mills along Honeoye Creek --- has profited from geography. It's near, but not fatally near, some major transportation corridors in the region: Interstates 90, 390, and 490; and routes 15, 15A, and 96.

Town officials seem committed to balancing growth and preservation. "We're actually trying to protect the village character," says Gustin. "We did a lot of work when we rezoned West Main Street [as a] mixed-use district." The rezoning, he says, will not allow drive-through restaurants and other things that would draw trade away from established businesses in the village core.

Such planning obviously concentrates on high-traffic areas. But another sort of intensive development has come more quietly to Honeoye Falls.

The larger public hardly knows it's there, in fact. Though it bears no corporate flag or logo, the development is a major presence that could help Rochester enter a new high-tech era.

And it's already put demure Honeoye Falls on the world stage.

This is the General Motors Fuel Cell Development Center.

Located on Carriage Street, blocks away from the Honeoye Falls business district, the center is one of three GM facilities worldwide that are devoted to developing hydrogen fuel cells. The other two facilities are in Warren, Michigan; and Mainz-Kastel, Germany. The fuel cells and fuel-cell engines developed here will be making a pit-stop in the German plant before the vehicles they power hit the pavement.

A total of around 500 people work at the three facilities, says a GM fact sheet. Around 200 people have been stationed in Honeoye Falls since 1998, and as of last summer, that number was expected to grow to 300. Just what are the engineers and other employees doing? They're running an R&D facility charged with developing hydrogen "fuel cell stacks," processors, and related devices to power a new generation of motor vehicles and industrial equipment.

The effort is part of a new energy regime that's not far down the road. And GM has been touting new products and designs that could position the company at or near the top of the heap: for example, the electric "EV-1" vehicle, the recently-unveiled "Hy-wire" hydrogen fuel-cell vehicle, and a new "skateboard" chassis that can be built up with different modules.

What are fuel cells, and why do so many people love them? Basically, the devices are a major departure from the internal combustion engine. In a fuel cell, hydrogen and oxygen react chemically to produce electricity, which then drives the wheels of the vehicle. There is no "burning" of fuel in the popular sense; the reaction produces water, not smoke. And there's lots of flexibility. For example, as a backgrounder from the Union of Concerned Scientists (UCS) explains, vehicular fuel cells can be powered by pure hydrogen or by methanol derived from liquid natural gas.

Fuel-cell technology has been around for many years --- so why all the excitement now, and why the push to build facilities as in Honeoye Falls? The most salient reasons are also the most crucial: getting cleaner air and slowing global warming.

"When run on pure hydrogen," vehicles powered by fuel cells "are true zero-emissions vehicles," says UCS. Even "when run on methanol, they still cut smog-forming pollution more than 90 percent." There are other benefits: "As with other electric-drive vehicles, fuel-cell cars are quiet, smooth, and fun to drive." Moreover, since fuel-cell cars don't need recharging from an outlet, they can have a range similar to that of ordinary vehicles.

Despite these technological selling points, the Honeoye Falls Fuel Cell Development Center doesn't advertise itself too much. There's no corporate flag flying, or logo in evidence. As Mayor Gustin and GM officials say, that's to be expected from a facility whose mission is proprietary research in a hotly competitive field.

But on occasion it's received good press.

For example, last July, GM executives and Governor George Pataki teamed up on-site to announce the center would shift into higher gear. "The State of New York," said Pataki, "is excited to be partnering with General Motors... Fuel cells will revolutionize the transportation and energy industries, and New York plans to be at the forefront of this rapidly-developing technology." (The New York State Research and Development Authority has generally been boosting fuel-cell and other alternative-fuels projects.)

Certainly the state support has something to do with the center's recent expansion into a second building. But why did GM locate such a rarity in Honeoye Falls? Or in the Rochester area, for that matter?

"I have no idea," says Mayor Gustin. He speculates GM was drawn by the peace and quiet and high quality of life. In any case, Gustin is appreciative. The center, he says, has created some new local jobs, though most of the staff have come from outside. "They've been very active in the community," says Gustin. GM employees, he says, have helped build a playground, paint a town gazebo, and lay a recreational trail.

Moreover, says Gustin, a 50-plus-acre site next to the center may accommodate some new retail and commercial development. "It's going to be a long-term project," he says.

Gustin also says residents are pleased to see some GM electric cars on village streets. "They buzz around town," he says. "The employees take them home." He says GM might also provide one such car for official village use.

GM knows exactly why it chose Honeoye Falls, of course.

Jon Bereisa, director of GM's "Mobility Solutions" division, tells how the idea and the center evolved here over the decades. (The Michigan-based Bereisa spoke to us by phone from an industry event in Ottawa, Ontario. No local spokesperson was available for comment.) "It was something less than an accident," says Bereisa. And it all began here at Delphi in the mid-to-late 1960s --- back when that GM division produced old-fashioned carburetors.

In 1997, says Bereisa, the fuel-cell project moved into a West Henrietta warehouse under a "disguise name" to fool competitors. From there it was a short hop to Honeoye Falls the next year.

Bereisa cites factors other than history and geography behind the choice of Honeoye Falls. One was the Rochester area's highly trained workforce. "We found it easy to recruit here," he says. The area's many recreational opportunities and a "quintessential New England calendar" --- four discrete seasons --- were drawing cards, too.

General Motors is a hard-nosed business, of course. With 355,000 employees worldwide, the company is the largest vehicle manufacturer on earth. So ultimately the Honeoye Falls operation is about producing vehicles and selling them --- and beating the other major automakers that, like GM, intend to roll out mass-market passenger vehicles within the next few years.

Bereisa anticipates booming sales of hydrogen fuel cell cars and trucks. But he sees multifaceted opportunities ahead. "Our challenge," he says, "is not just to do fuel-cell vehicles. We're re-inventing two things, the auto, and a different way of manufacturing autos." But autos are on the leading edge. "We now have around 70 electric [cars] in Upstate New York with nickel metal hydride batteries," says Bereisa. He adds that a small fleet of fuel-cell-powered electric vehicles will be on local roads soon.

Some North American communities, including Chicago, Washington, and Vancouver, have already put fuel-cells (not hydrogen-powered) on the street. Not in passenger vehicles, but in transit buses. The Federal Transit Administration has been pushing two types of fuel-cell engines for such buses: phosphoric-acid and "proton-exchange-membrane." An FTA fact sheet says methanol and pure hydrogen will be phased in, as well. A number of smaller companies are working on the necessary fuel cells.

But according to Bereisa, General Motors won't be phasing itself into this application. "GM exited the bus business many years ago," he says. "Frankly," he says, "transit buses would not create the type of volume" of production and sales the company requires. Instead, he says, GM is looking at actual and potential industrial applications for the end-products of Honeoye Falls R&D. For example, he says, hydrogen fuel cells can be "stacked" (combined) to run stationary factory equipment. "We just announced a deal with Dow Chemical," he says.

Bereisa also addresses a question that many policymakers, businesspeople, consumers, and environmentalists are pondering: Will there be enough hydrogen to meet the need?

Yes, he says confidently. Right now, he says, there's enough "global excess production" of hydrogen to meet around 15 percent of current fuel demand. "A lot of the hydrogen is not used, it's vented," he says. And he points out that hydrogen pipelines exist already; the hydrogen in the pipes, he says, is used to remove impurities from gasoline.

But how can we get enough supply to the demand side, through appropriate filling stations, and so forth? Bereisa says there won't be any overnight revolution; the transition will be incremental. "We just need to introduce 10 percent [more] each year," he says. He notes hydrogen's supply-side advantage, too: it can be produced with electricity from wind, coal, nuclear power, or other sources. (The nuclear connection has raised fears of a new wave of small, "high-temperature gas-cooled" nuclear reactors --- perhaps hundreds of them across the country --- built expressly for producing hydrogen. See Mark Baard's "It's Nucular," Village Voice, May 28-June 3, 2003.)

Then there's the Washington connection.

As Bereisa says, hydrogen fuel cells can replace batteries in many types of equipment the government buys from the private sector. He also notes the Department of Defense is the world's largest single purchaser of motor vehicles.

And here he sees possibilities for boosting the military mission.

As things stand, Bereisa explains, military vehicles are limited in their movements by access to diesel fuel. That is, all those tanks and Humvees can't go any further than the supply lines can stretch. (GM makes the Hummer, a smaller version of the Humvee, as well as vast numbers of other civilian SUVs.) This kept US forces stalled at the edge of Baghdad for a while recently, he theorizes. They didn't dare get caught in the thick of things without dependable refueling.

What to do? According to Bereisa and General Motors: Build vehicles that run on hydrogen fuel cells, and create moveable equipment that can generate the required hydrogen from water wherever the vehicles happen to be.

In other words, no more fuel supply lines at all. And new capabilities for outmaneuvering opposition forces in the next war --- wherever that may be, and whatever the wider implications.

There are understandable worries about shunting a benign technology like this to the Pentagon. For one thing, using scarce water in some parts of the world --- those without the bounty of a Honeoye Creek, you might say --- might cause ecological and social problems all by itself.

But there's another conundrum. A car may be a zero-emission vehicle, but it's still a car. It still demands road space, uses up tires, runs down pedestrians, and so forth.

Transportation specialist Charles Komanoff, a New York City-based consultant who's worked on transit and traffic issues in parts of the US and Canada, summarizes the objections. "Around 10 years ago," he writes in an e-mail responding to our questions, "I did a sprawling body of work on the societal costs of cars, and roughly concluded that electric cars would be 10-20 percent less damaging to society and the environment than gasoline cars. Air emissions and noise pollution would be much less, along with various oil costs. Everything else would remain, including impacts on 'social space'..."

Komanoff understands the trend, however. "The promise of perfectly clean exhaust certainly is alluring for consumers and thus for any auto manufacturer," he says. "GM would be idiotic to not be involved."

You could say the same of Rochester and one its most attractive suburbs.