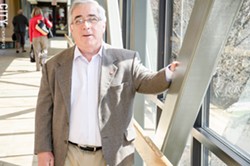 A plane carrying Rochester developer Larry Glazer and his wife, Jane, has crashed off the coast of Jamaica. There are no survivors.

The plane took off from the Rochester airport at 8:45 a.m. today, according to a press release from Monroe County Executive Maggie Brooks. Communication with the plane was apparently lost sometime before 10:45 a.m., at which time the airport director was contacted by the US Air Force and the Transportation Security Administration.

Heidi Zimmer-Meyer, president of the Rochester Downtown Development Corporation, says that Glazer was an accomplished pilot and an iconic figure in Rochester.

"There are some people who are not replaceable, and he is one of them," she says. "He is brilliant and passionate about this community. There's no one like him."

The plane was escorted by military fighters until it entered Cuba's air space. It ran out of fuel shortly afterward.