The Memorial Art Gallery last fall reimagined one of its smaller exhibition spaces as a Media Arts Watch Gallery, dedicated to film and media arts, and curated by John Hanhardt. The series will continue for two years, but through March 26, collaborative artists Gibson + Recoder (Sandra Gibson and Luis Recoder) have taken over the space with "Light Spill," a minimalist installation that has been collected by the MAG.

Just outside of the space, a case holds "Threadbare," a 16mm projector that Gibson + Recoder have wrapped in film. The mummified effect creates "a still life of motion picture phenomena," they say. What would normally run through the machine encases it, creating a flipped, inside out encounter, and arresting its potential for motion, and creating a sculptural object. Its reels also look a whole lot like Mickey Mouse's ears.

Provided information states that the Brooklyn-based artists consider film as a particular material experience rather than an event that unfolds over time, and that they expand the concept of film beyond images and storytelling to examine optical, mechanical, and sculptural dimensions. To achieve this, their work dismantles and recombines the components of film screening systems. 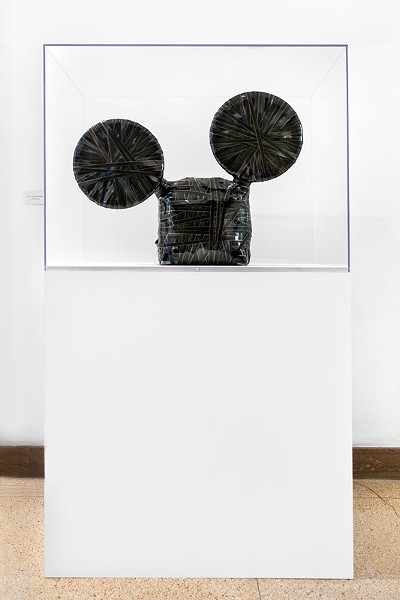 Inside the gallery, "Light Spill" consists of a 16mm projector on a pedestal aimed at a projection screen. The projector has been altered by removing the collection reel, so that the film spills from the projector and pools on the floor behind the base. The installation is rigged to a timer so that every 30 minutes it will run for about a minute. Between these moments of activity, the space is dark and filled with stillness. Anticipation is a built-in aspect of the work.

"We see it as a kind of performance piece," Recoder says. "The projector has to be threaded by an attendant, so it's really about the activity of threading the projector."

An attendant threads a new reel about once a day. During the exhibition's three-month run, the projector will go through 100 reels of film, so viewers can expect a towering pile of unspooled film by the end. "Threadbare" came after the concept of "Light Spill," when Gibson + Recoder wanted to do something with the spilled film.

The intermittency function of the projector -- which typically screens the film at 24 frames per second -- has also been disengaged, Gibson says, "so the film is running through the projector without any stopping." As a result, what is projected onto the screen is not a discernable film, only blurred, colorful light fields. 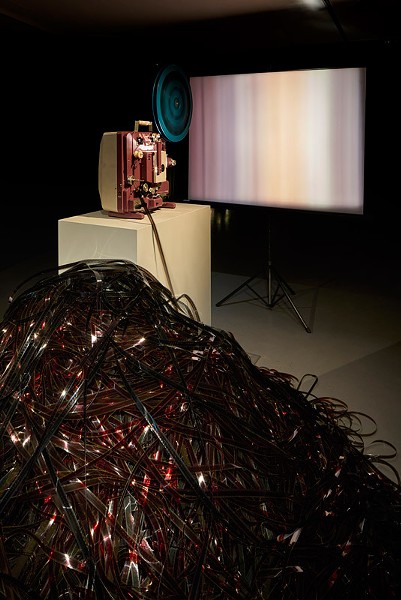 "For us it's not about the film content," Recoder says. "The film is material for us. We decided that the projection apparatus itself is more intriguing. These are materials that are not meant to be shown, a projector's meant to be in the booth. Everything we experience as viewers is all about the screened event, our experience in the theater."

But as this older technology experiences rolling obsolescence, we've moved even further from experiencing the performance of these machines. There are probably younger people who won't even know what the material is, the artists say.

Gibson explains that their work consists of tableaus from the projection booth that they present as performances. "Basically it's a performative instruction piece," she says.